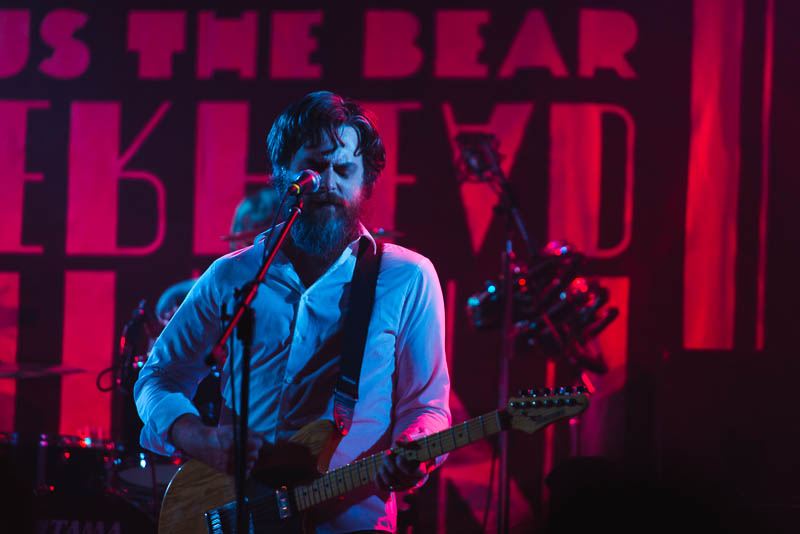 A truism: Minus The Bear fans are loyal.

Let me rewind. On Sunday, Metro Chicago was far from sold out. Minus The Bear wasn’t scheduled to hit the stage until 11 PM (on a school night – scandalous). And the first two openers amounted to a great deal of “meh.” So the crowd would be forgiven a degree of ennui when the Seattle band took the stage.

But it just wasn’t the case. The 3/4-full auditorium required no jolt of math rock to reawaken their sense – instead, fans endured. They endured and they awaited MTB’s arrival with yogic patience, erupting with the eager anticipation only fostered by hours of musical abstinence. Nary a note was played and the Metro was in full force on half a tank. Twelve years of creative genius gets you somewhere in this business, it seems.

It also earns you some cred to do as you want. MTB’s set reached from all corners of their career. They have a new album they released last year – Infinity Overhead – and while they played some of these recent cuts, they also dug out an array of gems from Planet of Ice, Menos El Oso, and elsewhere (lest we forget they released quite a few EPs).

The “MTB-Sampler” set demonstrated just how far the band’s come. I’m an admitted fan of some of their early work, but that doesn’t discredit the change in direction they’ve taken since Planet of Ice. Gone are the long-winded-and-hilarious song titles paired with syncopated rhythms so complex that the marriage of these two identities never felt consummated. MTB hasn’t lost their touch for humor, but it’s subtler in their newest record and they treat it with a greater degree of sincerity. They don’t slapstick for jokes; they present ironic twists of existential and postmodern angst.

Maybe I’m reading too much into their development. Fine. I hear you. You can go to Pitchfork for that. Then allow me to say that, regardless of how interesting MTB’s arrival has been, they also know how to work their instruments like a veteran hooker. The drummer (Erin Tate), physically speaking, looks like he might have been the nerdiest kid in high school. Let this be a life lesson – don’t make fun of nerds, because they will become some of the most technically proficient and impressive drummers in today’s scene and make your business degree completely obsolete.

Tate’s drumming was a focal point given the flurry of beats and changes featured in each song, but also because they’re so good at making it seamless. You listen to early Incubus and you hear young, albeit talented, musicians who are eager to show off what they can do. You listen to MTB and you hear their technical mastery embedded in structural and sonic wisdom. They don’t just buy a ton of kickass rugs – they use the one that ties the room together.

All this isn’t to say that Jake Snider, Dave Knudson, Alex Rose, and Cory Murchy can’t play. They can – and damn well, at that. Everyone in this band brings a degree of flash and excitement during breakdowns and bridges that the crowd ate it up like a Wisconsin sausage: aggressively. The sheer bliss that rained down during the encore matched the tenor the of youthful excitement that permeated pop-punk shows of the late ‘90s – except this time the music wasn’t adulterated shit.

Minus The Bear used to sing about hookers and cocaine and absinthe. Now they play music like they tried all that business, found it was awesome, but moved on anyway. Hell of a show.