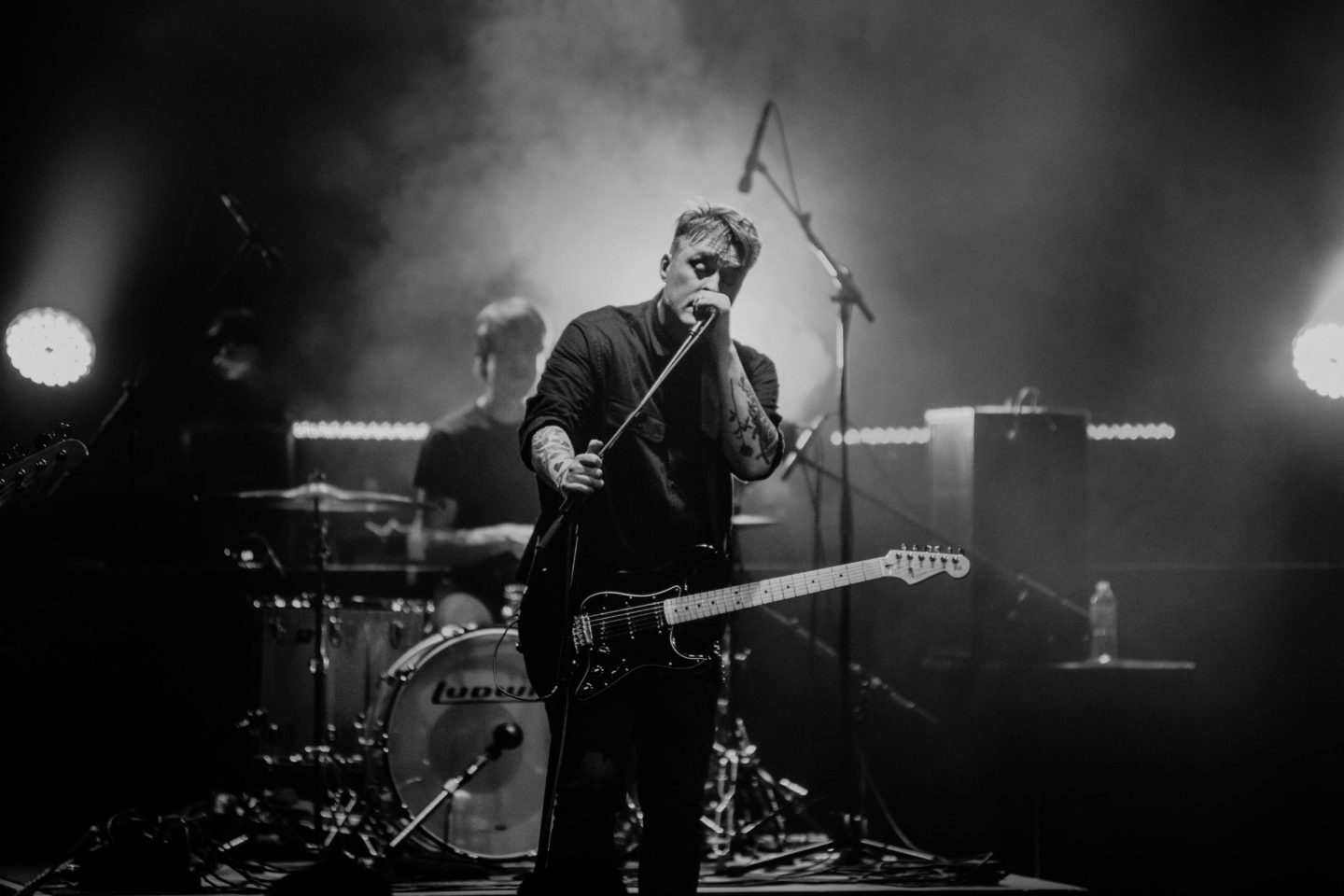 “Am I going to be the only person not wearing all black?” – joked Kelli, my friend, colleague, and photographer extraordinaire, as we were walking towards the venue from our parking spot. There is a grain of truth in every joke. Lush synths, rhythmic bass and emotional lyrics have turned ACTORS into one of the top Canadian post-punk bands, so you would expect them to appeal to a certain, dark alternative, audience.

But there is a twist to it.

We walked into Rickshaw Theatre: a fan favourite independent local gem that has been one of the most outspoken establishments during the pandemic, standing up for fellow alternative venues and advocating for better policies and funding. Their activism is now being rewarded with sold-out shows, one of which we are about to attend. As we got settled, picking seats and buying drinks, the playlist made entirely of The Cure songs kept on making me happy: this is my favourite band and an amazing mood setter for the upcoming show. And here is another little twist: even though the Cure is commonly perceived as all doom and gloom, Robert Smith was not always wearing lipstick! The Cure has a wild mix of genres and musical influences in their catalogue, from happiest pop songs to the darkest gothic rock. No one would ever call their most mainstream song, Friday I’m in Love, a heart-wrenching dark anthem. The owls are not always what they seem. You will see what I mean!

We are in for a long ride. There are three opening acts before we get to ACTORS. The Cure’s Charlotte Sometimes stopped playing as the first band appeared on the stage: a Vancouver-based post-punk quartet The Gathering. “Jesus, it’s good to be back” – proclaimed the lead singer Peter Burns and we could not agree more. Up next was Devours, a solo project of Jeff Cancade, with synth-pop, electronic and industrial influences and introspective lyrics. The music was so danceable that I heard the “why are we seated” sentiments echoing across the venue. The final opener was Bootblacks – the only out of towners in the lineup, a Brooklyn-based guitar-driven post-punk band, the ACTORS’ label mates.

By the time the openers wrapped up, the room was packed with people of various styles and aesthetics, wearing many different colours. You could most definitely spot a few goth folks here and there, but this music speaks to many different people and the ACTORS audience is truly diverse. No wonder this band continuously grows and incorporates different elements, influences and arrangements into their music.

We have gathered here to celebrate their sophomore full-length release: Acts of Worship, which came out on October 1st 2021. Their releases, shows and tours had to be postponed multiple times, and at this point, both the band and the fans felt relieved. We can finally get together again!

Actors took the stage around 10:30 PM and you could not help but admire how aesthetically pleasing their set-up looked. This is the first time Vancouver sees them live with the new bassist and background singer Kendall Wooding, who has equalled out the band’s female-to-male ratio and has opened some new doors in regard to their sound and vocal arrangements. Another female voice of the band is Shannon Hemmett, who also plays synth. Kendall and Shannon, both tall, thin, pale, with similar haircuts, dressed in leather and looking extra Matrix-y, framed the stage on both ends with style. Drummer Adam Fink was sitting behind a brand new shiny pink drum kit, and tall frontman Jason Corbett rocking a new incredible silver-haired look. He started the show with something everyone was eager to hear. “I do wish you to stand up!” – he proclaimed, and the sigh of relief could be heard across the room: The ACTORS’ music is danceable as much as it’s introspective, so seating would have been torturous. “Let’s fuck it up for a while!” – Corbett stated, as Shannon began playing opening notes of Love U More. As someone who has been in love with this track ever since it came out as a single a year ago, I was blown away by how incredible this song sounds live, and Kendall looked pumped to play her first song with the band in front of the home crowd. Actors have a huge international following, so welcoming them in Vancouver feels rewarding every time.

“We’ve got one more song for you!” – says Jason as soon as the first song ended, which was his first of many jokes of the night. The announcement was met with jokey “boos” and playful chants of “one more song”. Here is another twist: people not knowing Jason Corbett’s demeanour would expect the frontman of a post-punk band to be deadly serious (pun intended) and gloomy. On the contrary, Jason and his crew obviously have a great sense of humour and have tons of fun performing their songs. ACTORS have a very special bond with their fans, and often engage in friendly conversations with them on social media; this relationship is very clear during the concerts, as well.

The opener Love U More was followed by three other songs from Acts of Worship: emotional Like Suicide; Only Lonely with unforgettable syncopated bassline by Kendall; mechanical and haunting Cold Eyes. This is the exact order these four singles were released, which allowed listeners to relive the experience of getting those “treats” from the band,  one by one, during the pandemic. And look at us now, dancing to these songs together, in person!

Jason has mentioned on the podcast ‘The J Pod’, that he sees Acts of Worship as an unintentional concept album, representing the range of emotions coming from love and losing love – in other words, the steps of grieving. He also wants his music to be perfect for fast driving, and he succeeds in it, I checked! It is also perfect for dancing your heart out in dark venues during unprecedented pandemic times. Corbett and the team have a special talent for creating songs that are deep, atmospheric, and introspective, yet incredibly energetic, and, may I use this word, fun? The majority of ACTORS songs (and especially the songs performed live) have that unforgettable hook or line that turns them into perfect concert anthems and make people sing out loud. You may not know every single word, but you gotta know that catchy line that makes you sing along with Jason, Shannon and Kendall. Their songs always sound nostalgic yet modern, and futuristic at times, and this must be the key to the band appealing to such wide audiences.

Acts of Worship has redefined their sound and has quickly become a fan favourite, but nothing compares to the moment when the first “classic” song starts playing at a live show. The songs off the band’s debut release It Will Come To You got the audience really hyped, and made everyone sing even louder. The band started with the dancy and fast album opener L’Appel Du Vide. Never out of jokes, Jason added “yeah, couple of more songs ”, as the band transitioned to play their one of the most recognizable and definitely relatable songs, Slaves: “You used to be a slave to your emotions, you’re so emotional”.

After playing two more classic tunes, PTL and Crystal, ACTORS reverted back to the Acts of Worship, and played a few more new tracks: Strangers, Obsession and Killing Time (Is Over), perfect live concert bangers. The final few songs of the main set were the beautiful We Don’t Have to Dance (which sounds ironic considering the situation we’re in), and Face Meets Glass, with Shannon’s spoken passages and warbling synths.

At this point, the band was supposed to leave the stage for a few moments only to come back for an encore; Jason has suggested skipping that part (yet another great joke!) and the band jumped straight to the final two tunes: How Deep Is The Whole, and the super catchy Bury Me, that fittingly ends with “I’ve been waiting for a long time”. Hearing the crowd singing this line felt especially meaningful, considering how long we have been waiting for this moment to come: the moment we all sing and dance together, under the same room, to the old and new atmospheric tunes of our city’s favourite post-punk band.