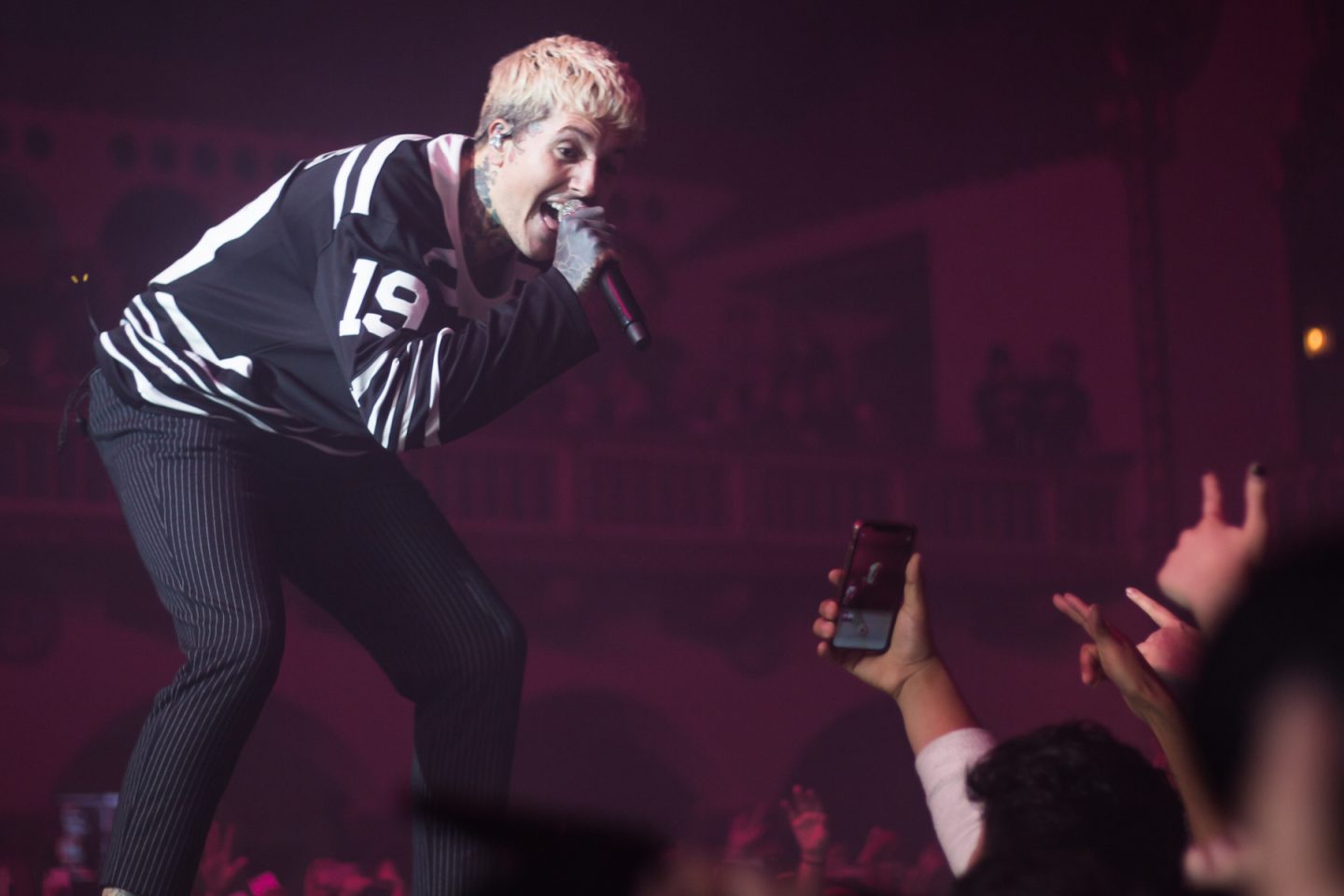 Chicago’s participation of Bring Me The Horizon’s First Love tour at the Aragon Ballroom yielded some amazing moments and multiple bruises for those in the front. With the lights turned off to prepare the crowd, Oli makes an appearance to the cheering crowd. The excitement is for both the show and his choice of wardrobe, a Chicago Blackhawks Jersey #19 with a slight Toews adjustment to Sykes. What felt like an angry dog on a leash begging to get out, the intro to “I Apologize If You Feel Something” ended and ramped up exponentially. Within seconds people were being pulled from the security rail only to head back into the pent up pack of fans. From what I could see during the first song, the fans being pulled out from the froth of action looked amazed they were still alive, somewhat disoriented, and eager to get to a quiet space for a moment; highly unlikely at this sold out concert. Mantra, the second song, seemed just too appropriate a choice as this is the second song from their new album Amo.

This band is both volatile and entertaining. Oli’s fan engagement was impressive as he walked out onto the front stage catwalk and sung to the fans. He gets into a full squat position and head bangs to the music. The vocal prowess is further reinforced as Oli screams lyrics one moment and whispers the next all while pointing out to the people receiving the message.

Aside from Matt the drummer, everyone else moved about the stage like a chemical reaction. The days of guitar cables would have put at least Lee, John, and Matt the bassist in a confined cage, wrapped up like a cable mummy. Wireless units are a God send, allowing especially these artists to dance while playing deep dropped chord riffs and big bottom end bass lines. It’s no doubt that the excitement from the band recirculates back into the audience as they bounce, jump, and pump their fists to the music.

The show continued through the night with more hits from Amo, and their prior most recent two albums, That’s The Spirit, and Sempiternal. At one point, Oli was “flipping the bird” to the crowd, seconds later, the crowd was returning the gesture only to break into the song Antivist, with the powerful lyrical repeat of “middle finger up if you don’t give a F**k”. It was probably a good idea to play “Drown”, an acoustic song, to help calm the crowd down after getting triggered.

With a solid footing of nu-metal and exploratory electronica, BMTH hits off on all cylinders and is a clinic in live entertainment and showmanship. Check out some of their latest work on Amo here.

See if you can imagine being squeezed against the barrier with this one:

Elle King at The Aragon Ballroom

With the sass of a cranky lover, she spit her tales like one would during a hangover brunch.