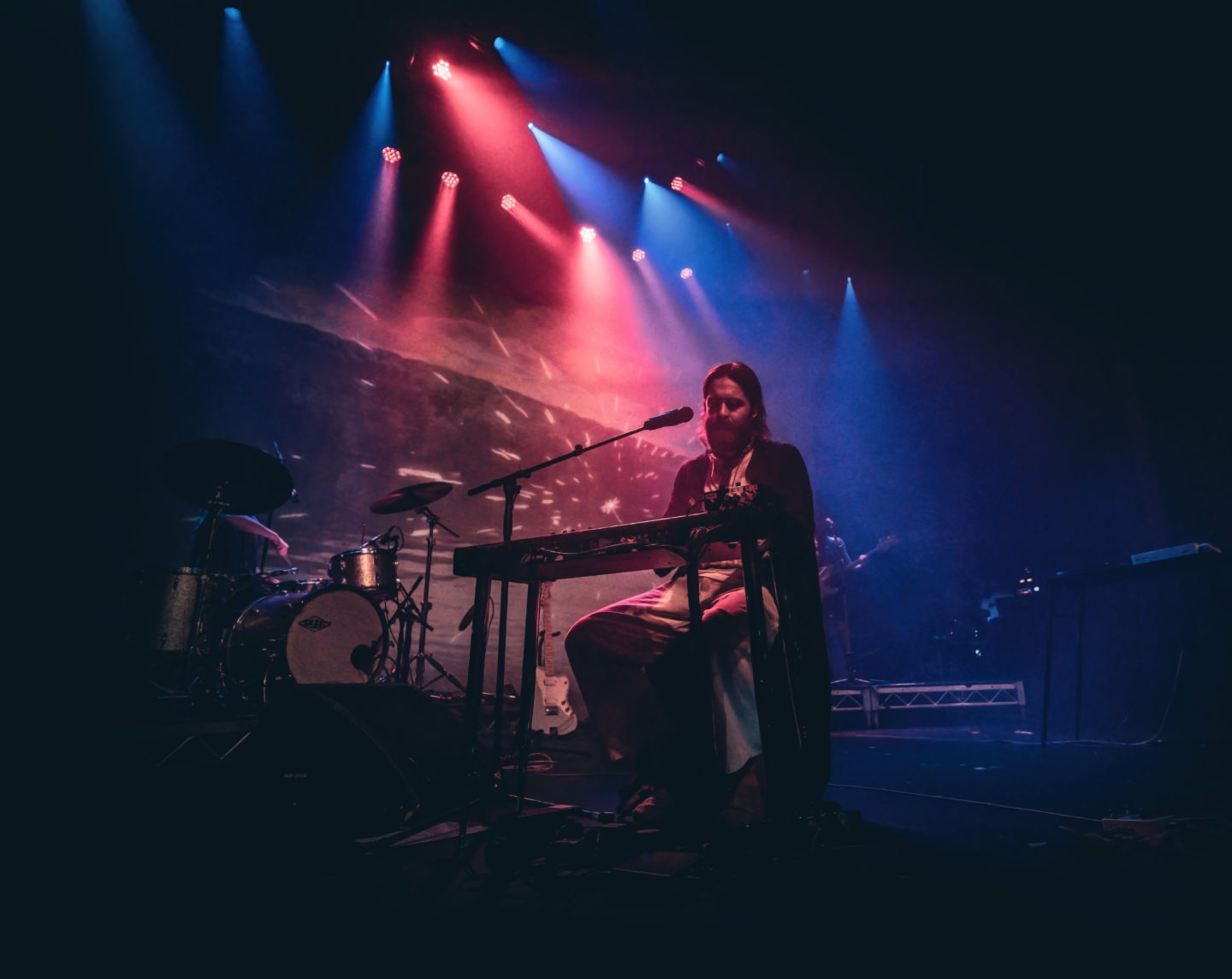 Chet Faker’s Hotel Surrender tour finished its last North American show at the sold-out Vogue Theatre in Vancouver, BC. Over a thousand people packed into the old 1941 theatre and waited for the return of the Australian multi-instrumental artist. His stage and backdrop were fairly typical for an older venue such as Vogue, with Chet Faker at the front center, a drummer, and bass player to his left and right in a triangle formation. The small band wasn’t an issue in bringing to life Chet Faker’s electronic soul with its songs that reverberated bass notes and gave space for piano melodies. A large screen behind the band showed graphics and emotionally felt patterns to match the mood of each song played – a safe and secure setup.

As Chet Faker opened with “So Long So Lonely”, a track off of his latest album Hotel Surrender, this may have been a signal to his internal state or perhaps a reflection of what the artist feels as the North American tour comes to a close. From my point of view, the room’s energy was palpable yet unpredictable and it took a bit longer for Chet Faker fans to fall into the groove of his music. The chemistry was there, but it took some coaxing. Throughout the evening, there were few words exchanged between Chet Faker and his attendees and whether the crowd fully realized this, it’s hard to say. The evening switched between bursts of energy, like when “1998” or “Drop The Game” was performed, and times when the crowd didn’t understand the cue of this, is the time to cheer and to cheer LOUDLY; this is the time to be quiet and to STAY quiet.

The evening was still a great success and fans were pleased with the artist’s choice of old classics like his infamous rendition of “No Diggity” by Blackstreet or the track “Gold” from his Built on Glass record. Chet Faker’s most recent tracks like “Low” or “Get High” were also huge hits and my personal favorite was in the whole ensemble of “Get High” since it showcased his the talented pianist within, his beautiful vocals, and the underlying truth what we all feel in our day-to-day lives. If attendees had plans to go out after the show, they may have been satisfied by Chet Faker’s performance which had the crowd on their feet dancing at his peak songs, having a fun time with their loved ones, and with the music itself. Subconsciously I always thought concerts were a shared experience between you and those attending, whether it was your friend, partner, or the stranger swaying to the music right next to you. I’m realizing it’s really an experience between you and the music itself – how the music makes you feel and how you respond to it.

It can’t be argued that Chet Faker is an artist who lives up to the potential of his recorded tracks and I would definitely choose to see him in concert again. The opening track of Hotel Surrender,  “Oh Me Oh My”  is thematic in music’s ability to be a tangible, powerful and curious force in one’s life. Its lyrics ring true to the evening:

Most people don’t know what it does

Just accept it as the sky is blue.”