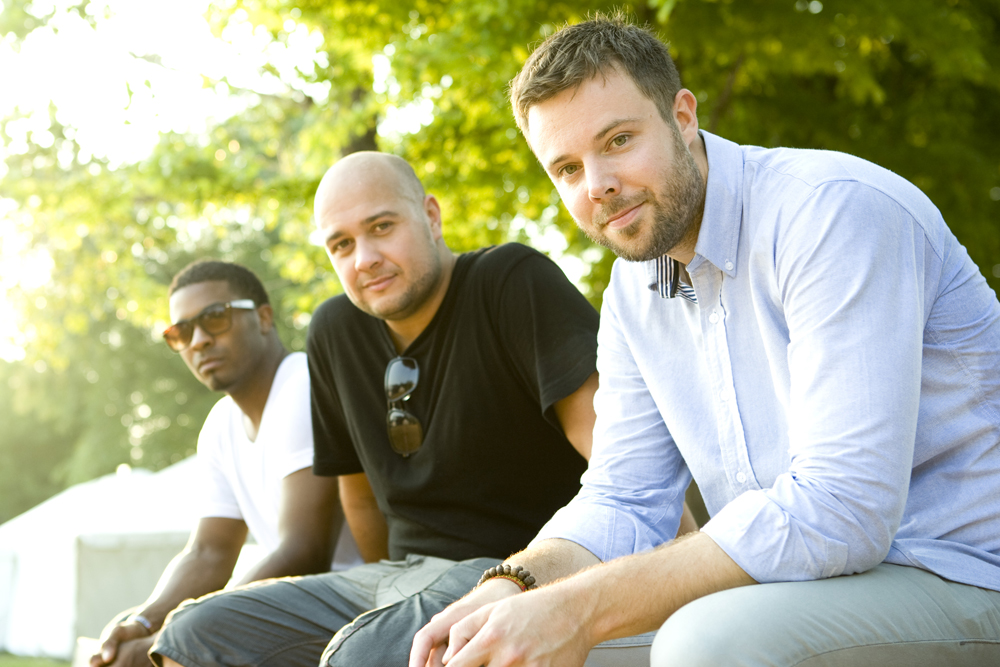 In the spirit of full disclosure, I had no idea who Keys N Krates were a week prior to North Coast Music Festival 2011 when we got the request for an interview. Hitting the stage at North Coast is, based on what other people have said, the ticket to Lollapalooza the following year. After doing some research, seeing them perform live and standing up (there was a definite lack of chairs) to talk with them, I can’t help but feeling like I arrived a little too fashionably late to the “live remixing” party that is all but destined for mainstream success. But enough about me, let’s talk about three dudes from Canada who are all way too nice and agreed to answer a bunch of really ridiculous, but important questions.

In case you’re not aware, Keys N Krates musical niche is something they like to call “live remixing.” The end product is a bunch of songs you’re familiar with getting flipped-turned upside down, but I’d like to take a minute just sit right there and tell you how it ends up at flair. It’s not just Greg “DJ Jr. Flo” Dawson, Adam Tune and David Matisse up on stage doing improv performances. There’s a composition to each of the tracks and the lineup that results in a repeatable experience everyone can enjoy. Like every other band on your radar, there are rehearsals and a plan, but everything is performed live. Honestly though, if it were up to them, they’d never have to define “live remixing” again because they’ve been asked the question a million times. Also, don’t ask them about how they met because you can read the Abby story all over the Internet. Seriously. Matisse will just make the “Oh God, not again” if you ask them.

Around this point in the interview, they jump the gun on the interview questions and ask us about deep dish pizza in Chicago. Regardless of your personal opinion, the answer to our standard “Chicago style hot dog or deep dish pizza” question says a lot about a person –and we’re not just talking about being cheesy. We tell them their options are Giordano’s and Lou Malnati’s (The team is divided on this topic.), Google Maps them some addresses (we’re full service here at Lost In Concert) and get back to the business at hand –Phil Collins.

In a previous interview, Tune (drummer extraordinaire) is quoted as saying that Phil Collins is a guilty pleasure. Obviously this was something we had to talk about. If he could only remix Collins songs, the “hit single” would be crafted out of “Sussudio,” “Take Me Home” and “I Don’t Wanna Know” (For the record ladies and gents, those are all diddies from the chart topping 1985 Grammy Pop Album of the Year, No Jacket Required.), but not “In The Air Tonight” because that would just be too obvious. What about “Another Day in Paradise?” “All the Phil Collins songs seem to blend together for me.” Does Tune have aspirations about stepping out from behind the kit and dropping tracks for the next big Disney animated film? Probably not, but if it happens you heard it here first.

We probably should have mentioned it earlier, but Tune, Flowinsky and Matisse hail from the area of the great white north known as Toronto. There are a lot of bands from Toronto (Crystal Castles, DFA 1979, Metric, Young Empires) making waves in the US. We assumed that it was something in the water up there, but they’re convinced the recognition is cyclical. “There are a lot of our friends, our contemporaries, that aren’t recognized. Let it grow organically and just see what happens.” Sentiments like that are probably why they just played North Coast and before that, Summer Camp –or the “like some sort of Alice in Wonderland shit because it was in a lit up forest in the middle of nowhere” as they like to call it.” Now that they’ve been doing this for a while and traveling internationally on Red Bull’s dime, I think it’s safe to say that it happened.

With shirts clearly soaked with sweat, gym towels and drained bottles of water, it’s clear that the guys in Keys N Krates play as hard as they work, but the real magic is in their honest chemistry. This isn’t a band you’re going to fall in love with only to see them broken up for “creative differences.” They’re going to be remixing hits for themselves and other artists until the bottom drops out. Based on their chemistry and skill, that’s not going to happen any time soon.

But wait, there’s more! In parting, they added this:
Dear Chicago, keep doing what you’re doing.
Dear guy with owl on a stick, I would like to drink with you. –DJ Jr. Flo
Dear the three girls in front during our set, I want to know you. –Matisse