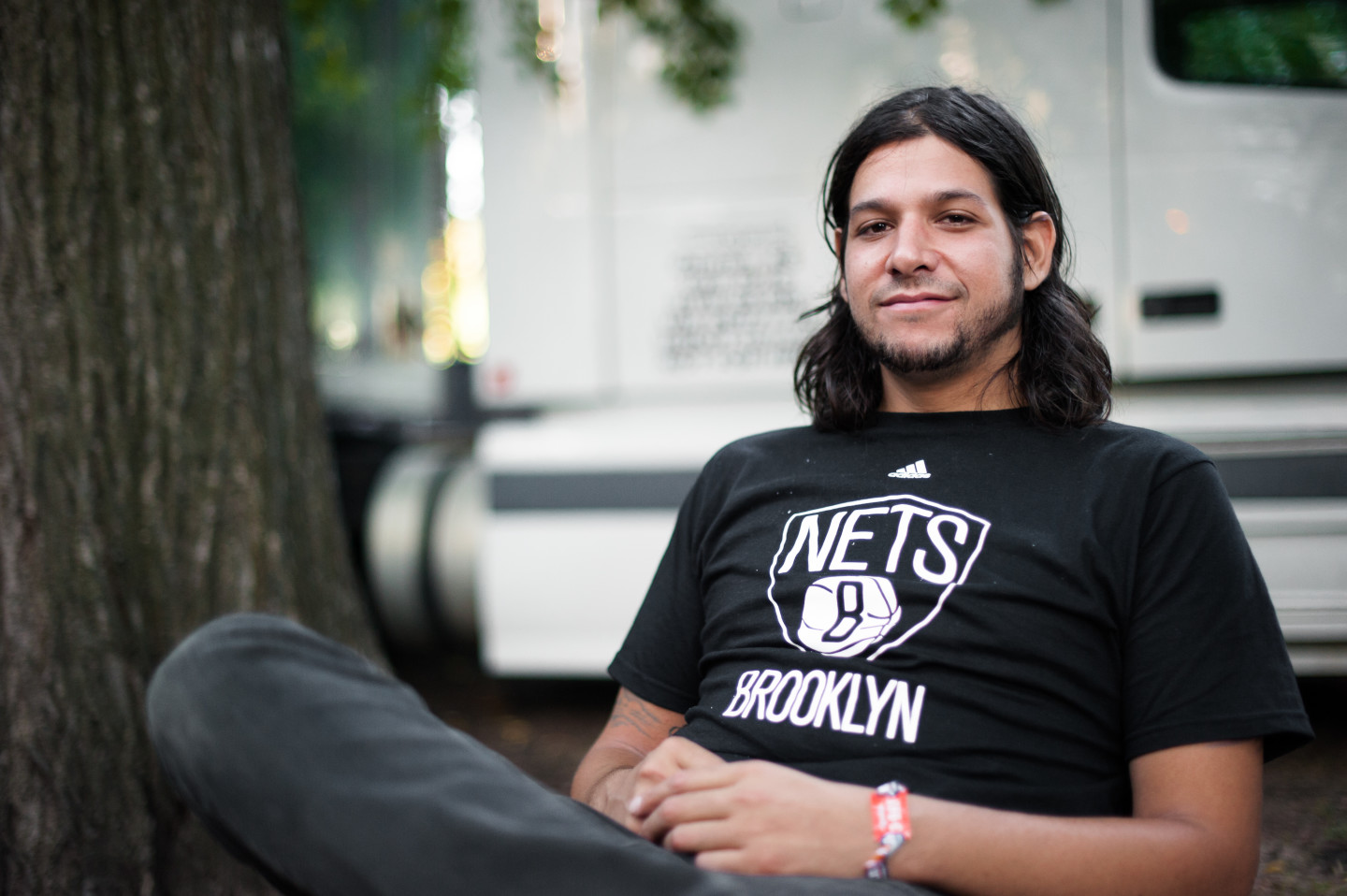 The Gaslight Anthem arrived in Chicago just in time to catch the now infamous “Lollapocalypse” storm of 2012 that swept over the city and prompted the evacuation of Lollapalooza on Saturday, August 4th. On the following day, Lost In Concert sat with drummer Benny Horowitz behind the Google Play stage where the band had unleashed a killer set to a huge audience just an hour before. We talked about positive buzz, negative reviews and at least one reason why he dislikes Ashton Kutcher.

“We landed about half an hour before the storm hit,” says Horowitz. “Our Tour Manager Scotty picked us up in a van. We started driving and about 5 minutes into the drive, it just went black. We heard they were about to evacuate and we were just driving, checking out the storm. It was pretty fucking crazy; black and windy and lightning. It was pretty cool actually, but I felt bad for the people here at Lolla.”

Ah yes, the mass of loyal music lovers who were unexpectedly herded into the streets of downtown Chicago due to the storm warning – many of whom dared to return that same evening or next day to the muddy swamp that Grant Park had become – all in the name of seeing great bands like The Gaslight Anthem tear up a Lollapalooza stage.

The band recently released their new album, Handwritten, which has generated an enthusiastic buzz that is deeply exciting the band’s long-time fans and also attracting new followers. “I don’t think this record is any more exciting than the other records we’ve done,” says Horowitz. “The build-up before every record we have, I always have this crazy anticipation to let people hear it because I think it’s good. But the reaction we’ve had during this week since the record’s come out, and a lot of the stuff that’s happening – we’re all like, ‘something’s happening for this record that maybe hasn’t happened before.’ Maybe it’s the mixture of the timing and the record and the new people behind it and stuff like that. Something’s different but I don’t know if it’s happened long enough to really know what the fuck is going on yet.”

It seems like Handwritten may have had good ju-ju going for it from the start, as the recording process sounds like it was an all-around smooth ride. “I had a really good time recording the record,” shares Horowitz. “It was a cool experience overall. We did it old-school style. We packed up the van and we all drove down to Nashville together. We rented a house just 15 minutes out of town. We brought Alex’ dog,” he adds with a smile. “And the studio was great,” he continues. “The people who worked there were so cool. It’s one of those experiences that was so positive.”

A road trip to Nashville with a van full of instruments and a dog enjoying the breeze out the window? Doesn’t sound like there’s too much punk-rock angst in that, but believe me, this record doesn’t fall short when it comes to the vehement passion and grit that put this New Jersey band on the map back in 2007.

Although Handwritten is the fourth album from The Gaslight Anthem, some members have admitted to it still not being easy to withstand all the criticism and reviews that come along with a new release. “There are guys in the band who don’t want to get reviews anymore; they don’t want to see it. They’re affected by it, you know,” says Horowitz.

Benny himself has his own (really honest) philosophy. “I personally love reading reviews because it’s a funny thing; because I’ve always thought so much of it is full of shit. I had this really funny experience just like a week ago that really confirmed how big a load of shit it is… which is that Pitchfork gave the new record, like a 5.8 or something like that. Me and Alex [Rosamilia] had an old band called The Killing Gift, which was like a sort of bad attempt at punk with a female singer. We wrote a record that was…okay. Pitchfork gave that like an 8.4, or some shit like that. So I’m sitting there looking at these two records and saying, ‘Man, if you can’t tell me this isn’t a fucking arbitrary process; the reviews on the records, and the rankings and the mood of the douchebag who wrote it that day. It’s a load of shit because you don’t know -homeboy’s cat could have died that morning and all of a sudden he hates every piece of music he hears.”

Refreshing candor aside, Horowitz wrapped up the rant nicely with a concise bit of wisdom. “This is all subjective. It’s all based on taste. It’s just not healthy for an artist to take that stuff seriously and walk down that road.”

Before you go crank “45″ and “Keepsake” off TGA’s new record, there’s one more thing that Benny Horowitz shared in the interview – and this could totally throw off the accuracy of Teen People’s reporting. It was he who started the “mesh trucker hat thing” for which Ashton Kutcher got all the credit. “Wait, I don’t know if I started it,” he pauses. “But I definitely pre-dated that fucking clown.”

From record reviews to celeb-douche accusations, you gotta’ love this guy’s honesty. Not that he gives a shit what any of us think.

The Gaslight Anthem at Lollapalooza 2012