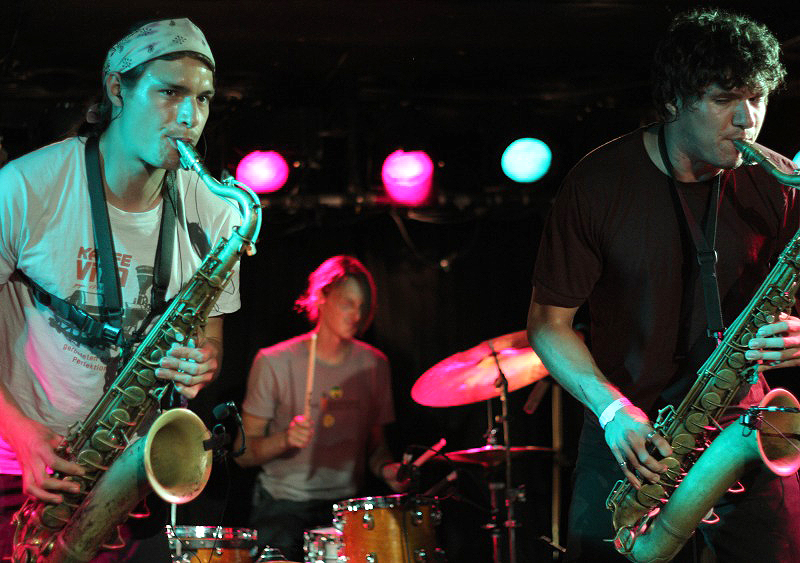 It was a scintillating summertime Monday night for many people in Chicago. The beloved Blackhawks had a chance to win the Stanley Cup, and this meant that everybody and their grandparents had their eyes glued to the TV and their hand glued to a beer. I, however, was happily at the Subterranean (read: no TVs) and I had my eyes glued to something much different.

This one guy was dancing like a crazy person to Genome, the openers for Moon Hooch. Why is he getting down so hard? This is some good stuff, but you gotta have a lot of self-confidence to move like that when everyone else is just bobbing their heads.

It all made sense once Moon Hooch got on the stage. That dancing dude? He’s Moon Hooch’s  tenor sax/contrabass clarinet player, Wenzl McGowen, and that’s just how they roll. You have to be at least a little bit nuts to start a band with 2 saxophones and a drummer, and it works for ’em. From the first note to the last, this supposed novelty power trio was nothing short of INTENSE.

On the self-released The Moon Hooch Album, their self-proclaimed “cave music” is raw and primitive, without much creative producing or use of rack effects, but Moon Hooch live is a whole different animal. Ok, it’s the same animal, but with some really cool extra stripes and mega-fangs or something. Like sticking a huge traffic cone in the bell of a saxophone to drop the pitch to the sub-basement or bringing their own sound-and-effects guy. The effects guy was basically the fourth member of the band, adding effects to the pulsing saxes and drums at the just the right time to enhance the drops and make you want to, nay, need to dance that much harder.

It is that need, that compulsion to dance to Moon Hooch that caused dance parties in the subways of New York City (which got them banned from at least one station), and it worked just as well at the Subterranean in Chicago. Although the crowd was sparser than I had expected, probably due to it being a Monday and that whole Stanley Cup thing, we were all getting down real hard.

And so were Moon Hooch, Jesus Christ. Let me just say that I’ve seen a lot of sax players in my life, and I’ve never, ever seen a saxophone played with as much aggression and intensity as Mike Wilbur and Wenzl. Their faces constantly strained to produce the most extreme and varying honks and shrieks, screaming bloody murder at the climax of some songs, and this is somehow all built around great pop melodies. Wilbur had entire solos of controlled sax noise, but even these have a definite melody.

Frenetic drummer James Muschler also got in on the weirdness with a two-minute rhythmic vocal solo comprised of all gibberish about two-thirds through the set. It was one of those things where everybody in the audience keeps looking at each other wordlessly asking, “What the fuck is going on here?” It was a good kind of “What the fuck” though, where you say it with a smile.

Ok, so it is established. Moon Hooch is super cool. The question now is whether they can transcend the novelty band label that they cannot avoid simply because of their unique instrumentation. They have the first part of the answer to that question down pat, which is to be badasses. The next step is to continue to grow musically and produce consistently, and that is tough even for bands with much less restricting instrumentation. That being said, their new songs are expanding well upon their previous material, and the tasteful use of effects in their live show find Moon Hooch traveling down a road only hinted at on their debut album.

Really though, the only indicator of future longevity you need is the response from the audience, and after an hour and a half of cave music, all we did was want more. We wanted it hard enough to bring the band back for two encores, even though the band didn’t seem to be expecting one. They just stood up there on stage, beaming and not knowing what to do as the audience refused to stop applauding. Then it was a kind of collective head shake and an, “Oh yeah, we’re supposed to play another song when this happens!”