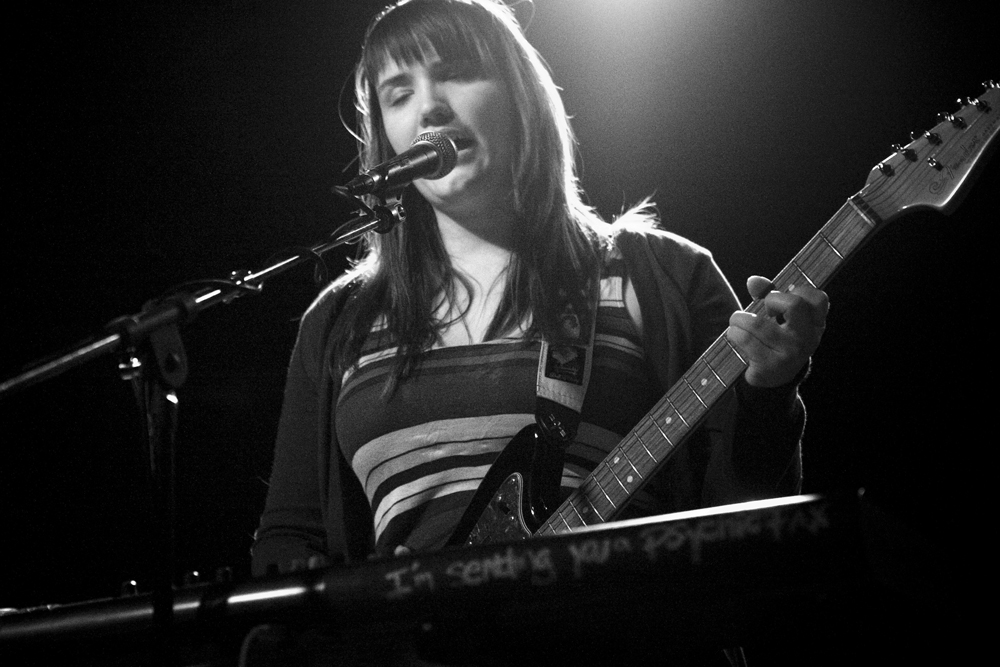 It’s 4/20 at around 10pm and the Bottom Lounge is dimly lit. This confluence of circumstances – with help from a certain “herbal supplement” – meant the crowd assembled for the shoegaze spectacular was more than a little bit lethargic. Panda Riot’s set began with the sound of digital ivory and slight symbol crashes which didn’t do anything more than perk up the ears of the audience. Queue the guitars and bass.

Woken up from their standing slumbers, the audience began to take notice of their surroundings. The light slowly shifted from yellow to blue to reveal 4 bodies on stage. The drum machine syncopation takes care of the mundane, leaving the still erect (as in vertical) drummer to focus on the flourishes. Cordoned off stage left you will also find guitar and bass. Then the airy, almost apprehensive vocals wash over the crowd with a warmth normally reserved for an emergency blanket.

The sonic division between the individual parts of the songs is mirrored physically by the musician’s presence on stage. Guitars, drums, bass to the left; vocals, guitar, keys to the right. Stage right is almost completely dominated by the multi-instrumentalist in the stockings, but that seems fitting. She might not physically be center stage, but she is sonically. The spine-tingling lull that left her lips was propelled into the purely ethereal by the programmed drum machine and the capable band members.

Song titles like “Valium Unicorns” clearly represent the driving force behind their sound. It’s a more adult appreciation of an almost childlike innocence that let’s you simply get wrapped up in the sound instead of worrying about the details. It’s shoegaze soliloquy.

Someone shouted out "I'm hurting too" which was very sweet, fitting the mood well.