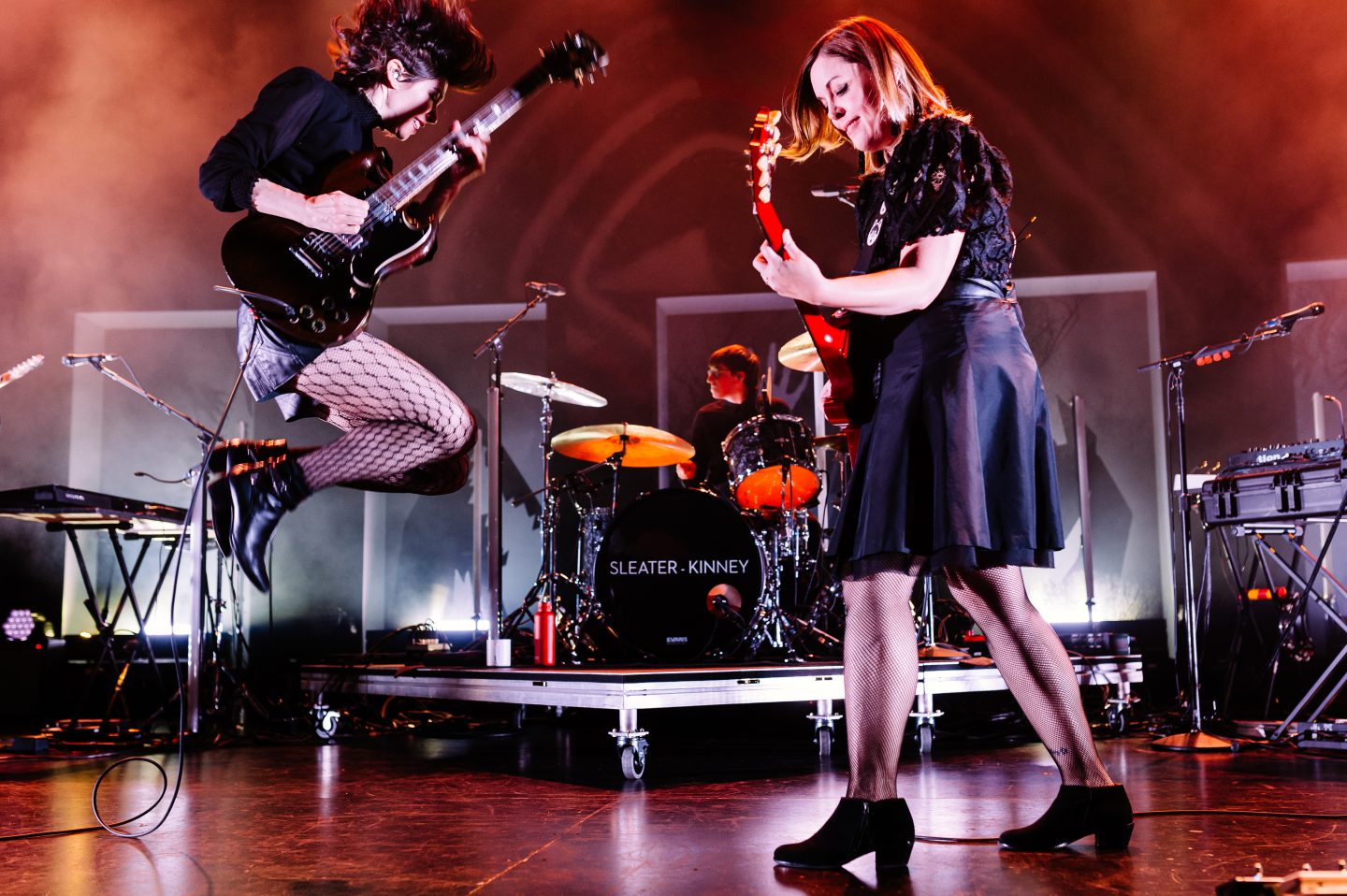 Sleater-Kinney at The Paramount Theatre

The roar of the crowd swells as the lights go down and Sleater-Kinney walks onto the historic Paramount Theatre stage.

Everyone goes wild as they open with The Center Won’t Hold. The build up and eventual payoff are a perfect fit, considering the stark contrast of the opener. Instantly Brownstein’s energy is infectious, with her bright red smile shining through to every corner of the venue. As exuberant as Brownstein is, Tucker is the rock, working her guitar and mic like the seasoned professional she is.

As they work through their set, leveraging their extensive catalog, Brownstein eventually pauses to address the crowd. I wish I had captured it word for word, but the essence of it revolved around the fact that:

now more than ever, it is vital to show up for the things you believe in, no matter what that looks like. Not everyone participates in the same way, so support those around you. You don’t know what they are going through or in what way they can contribute.

Clearly Sleater-Kinney is no stranger to getting political or addressing hairy topics, but that part about participation truly struck a chord with me. Spending the majority of my time in a much more (musically) aggressive scene, I tend to expect shit to get crazy. I mean, I have a hard enough time standing still in general so when I’m feeling that sonic sensation, I HAVE to move.

Brownstein’s comment, however, reminded me that not everyone is like that. They could be rocking out harder than I could imagine, without me even knowing it. Cue the guilt for silently judging those sitting in the back not dancing as hard as I was.

After slaying a handful more songs, they take another moment to thank the crowd, especially those locals that have been following them religiously. Being originally from Olympia, closing out the tour with 2 nights in Seattle was a special treat for both them and us hometown fans.

The encore opens with Broken, a beautiful duet featuring Brownstein caressing the ivories and Tucker’s amazing pipes. Two songs later, one bodacious fan hurls their bra onto the stage. Impressed for probably more than one reason, the band is momentarily taken aback, but quickly recovers by spontaneously adding in Call the Doctor as a bonus.

They close with Dig Me Out and you could clearly feel the love in the room. Nobody, including myself, wants it to end even though they have been playing for roughly 2 hours. I have to be honest, I wasn’t too familiar with their work before I walked in, but I can definitely say I’m now a proud fan. \m/

Belle & Sebastian at The Paramount Theatre

It's not your parents' dance party

Faith No More at The Paramount Theatre