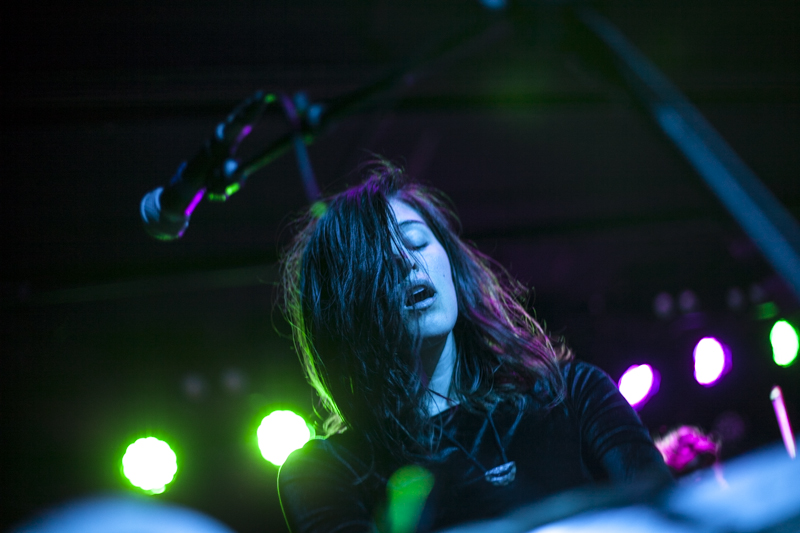 At 7:31 pm the heavy velvet curtain of the theater coiled, revealing the seven piece orchestral group, The Soil and the Sun. They were ready, with their bows positioned, and guitars tuned. The smattering little city of endless effects pedals and electronics laid at their feet were plugged in, amped up and ready to blast sweet nothings into every earhole within reach.

There was no awkward and unsatisfying tease of the sound check. No, these guys are far too tight for that kind of amateur play. They started things off swift and delicious, and it was apparent from the first song that they knew how to ask you to shut up, lay down your arms and willingly bequeath your attention. They built the tension, adding layers upon layers of nuanced sounds. They fully embrace the minor and diminished chords that really round out their sound. Their music was apocalyptic and soothing. It seems to rest on that line between beauty and tragedy that I find very moving. It has so much depth yet it’s so delicate in the precise nature of their collaboration. They would build to a crescendo and follow with low cowboy vocals, forcing you to lean in and follow each lingering word. Then, BOOM. Full-bodied-multi-layered-orchestra.

It was the kind of collaboration and timing that can only come from extremely talented musicians. It gave me that delusional feeling you get when you’ve been lost in the woods for too long and begin to realize that you may never find your way home. You experience almost every single emotion in one moment. I envisioned this angelic chorus hovering above me, forcing me to keep walking, bringing me hope to go on. I may have been reliving moments from The Road, or even the Lord of the Rings trilogy but it was a strange and specific feeling that was immensely gratifying. Regardless, it’s extremely rare to find a band that really gets you to feel something this deep.

The Roxy had filled up with a horde of eager eyes. I turned my attention away from the stage and noticed the crowd had been inching from the woodwork. This amount of people is pretty hard to accumulate for an early night Thursday show in the middle of West Hollywood. But then again, this was The Roxy after all. The theater used to be a strip-club called The Largo until 1973 when it changed hands and reopened as a performance venue. The Roxy hosted the first ever showing of The Rocky Horror Picture Show when it came to the states as a play before it was made into the cult classic movie that it is now. Neil Young even performed there the first week it opened. This venue is soaked with history but it takes more than that to fill the floor.

When we arrived there was a good crowd sparsely occupying the space. There was one fan that stood two feet away from the stage curtain. He literally rocked heel to toe in anticipation. I think this fan knew what I quickly found out. This band has so much passion. It was magnetic. I wanted to run home and dust my banjo off. Their energy was so high that I mistook them for being young, maybe playing together for only a year. There sang and shook and stamped their feet. It entranced the crowd, forcing us to shake and dance. We had no other option. You can hear in their music that this group has been evolving together for four years now. They described themselves as New Mexican Space Music, or Experiential Spiritual Orchestral Rock. Which is oddly a really accurate description, but I think that might be one of those obscure genres that you need to hear to make sense of. To me they reminded me of Explosions in the Sky, if they finally decided to write some fucking lyrics.

The Soil and the Sun is made of seven members: a drummer who keeps the rhythm progressive and tight, a ravaging violinist whose hair started out as neat dirty-blonde bun atop her head and quickly enveloped her whole head, a lead singer who played the guitar a small drum set and a string of bells around his ankle, a bassist who despite his Croakies kept loosing his glasses to that little spot between his nose and his upper lip, two lovely keyboardists who added vocal harmony, layered melodies and just the right amount of the oboe and tambourine. It’s really easy to over do the oboe and the tambourine. All the members sang along even if they didn’t have a microphone. They were there because they loved it, and it really showed. It was enigmatic, and if you haven’t experienced them before. Don’t hesitate to just buy the ticket and experience it live. The way music should be experienced. I wouldn’t want to compress their music down, because they obviously worked too hard for that tragedy to occur.