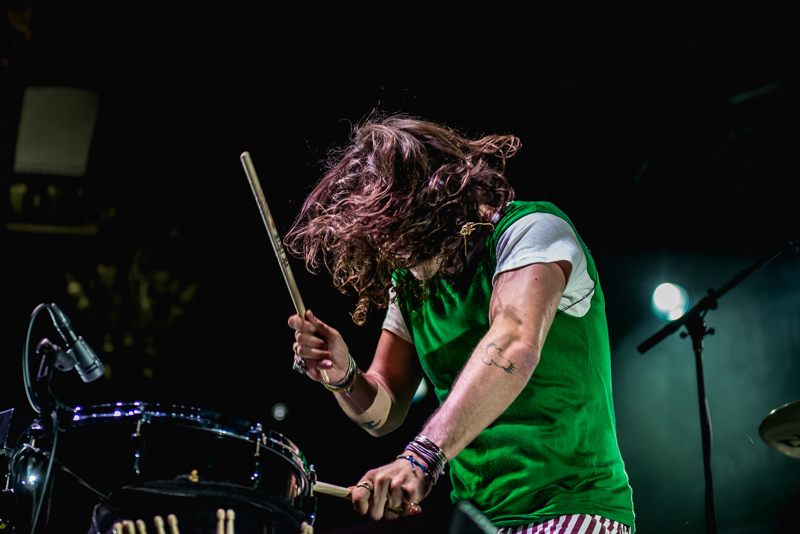 Youngblood Hawke at The Aragon Ballroom

I’ll never complain about waiting in line for the bathroom. Not after the line I stood in waiting for “The Night We Stole Christmas.” My line adventure started across from The Green Mill. Now that’s not terribly far away if I was walking a straight shot to Aragon. But that wasn’t the case. Weaving through various lots and wrapping around buildings was the form of this time waster. Stepping through the doors I was greeted by a car on display, drink stands as far as the eye can see, and a mug shot photo-op area. No time for any of that though, Youngblood Hawke is taking the stage. Well I lied; there was time to grab a Jameson and ginger. Ok, now onto the music.

Singer Sam Martin and Alice Katz were definitely competing for best dressed on stage. Martin showing off a pair of vibrant red and white stripped pants that gave off a fun vibe. And Katz, well, was quite the sight for sore eyes. I’m a sucker for a girl who can sing. I’ll be the first to admit that, and honestly looks have nothing to do with it. But when looks are added to the table along with the lungs to back it up, it’s game over for me. Let’s call this fashion battle a draw. Martin’s energy flowed through the set; dancing from one end to another with the microphone glued to his hand. That energy was injected into the crowd as all six members led the crowd in clapping to support one of the “We Come Running” choruses.

By the way, I’m not sure if everyone was a little too drunk or just that bad at clapping in time but…that was rough on the ears. I’d appreciate you all working on that for whatever next show you plan on attending. Two musical climaxes stood out to me. The first came from Nik Hughes’ drumming during one of the final seconds of “We Come Running,” and the second came as they closed out their set (as it should be). First, Hughes’ use of the symbols to emphasize the half-time feel felt oh so right. And he looked like he was having one hell of a time. Next, to close out the show all hands were on deck playing various percussion/rhythmic instruments. They were grooving. Ohhh were they grooving. I’ve seen a few groups do this in the past, and all have the same result. Success. Its fun to watch, and unless you are musically inept it’s fairly easy to pull off.

The thing I was most intrigued to hear was how they pulled off the multi-part vocal parts. And I’d say they re-created the same results as their records. Not that being an exact replica of a recording is always good, but as far as general feel and vocal accuracy, it’s absolutely important. Spread across the whole stage each member added a different musical element than the band member next to him or her. They are a fresh face still and have a lot of time to keep growing. I think they will stick, and look forward to see what other stage tricks they have up their sleeves.