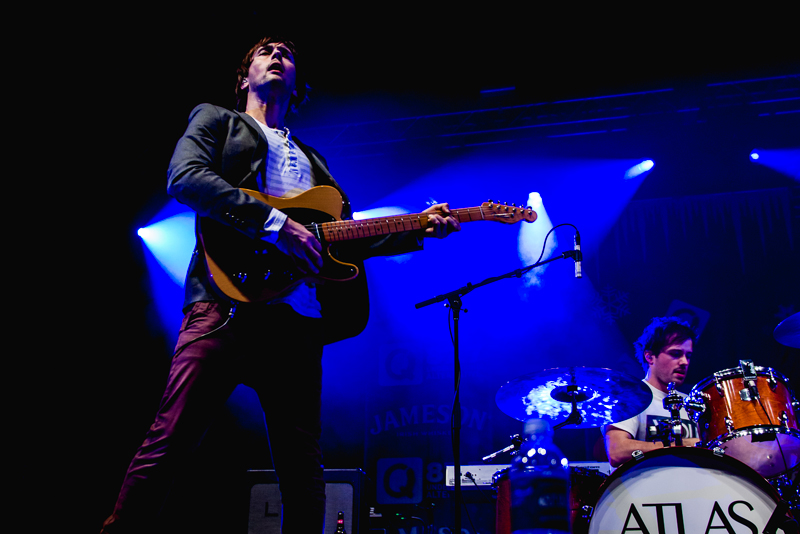 Atlas Genius at The Aragon Ballroom

Wrapping up their four month tour, Atlas Genius stopped by Aragon Ballroom to take part in “The Night We Stole Christmas.” The gentleman hailing from Adelaide, South Australia made the most of the short stage time they had. They mixed songs from their EP with songs to appear on their upcoming album. Of course they played “Trojans,” you know that one song you recognize. Don’t lie; there is no way you haven’t jammed out to it in the shower. Washing habits aside, to kick off their set the electronic drumbeat from “Backseat” led the way.

Michael Jeffrey’s drumming felt more energetic than expected from listening to their Through the Glass EP. It was very lively, playful and gave the listener something to latch onto. The vibe from Keith Jeffrey was mostly relaxed, with bursts of energy–especially during bridges and while embellishing his lead guitar lines. In general it was interesting to see the group in general hold back until the actual climax of a song. A lot of times acts are either going a million miles per hour for every note played, or they just sit back and let the crowd do the moving. They achieved a little of both. I don’t particularly enjoy bands that look like zombies on stage, but I am absolutely good with how they handled it. Another thing I was good with: the appearances of some slide guitar. If a guitarist can effectively pull of the slide guitar, go for it. If they can pull it off using a bottle of beer, I think you must do it. Pre-chugging of that cool beverage, Keith gave the crow a real reason to “ooh” and “ah” as his bottle was gliding over each fret.

To say I knew what I would be listening to throughout their set aside from “Trojans” I’d be lying to you. What did I get out of their performance? Honestly, not much. It’s not a slight on them, but has more to do with fact they only had time to play five songs. And judging by the mid-set discussion, they weren’t ready for the show to end. The taste left in my mouth was good however, and I’d say is worth taking a bigger bite into next time they are in the windy city.