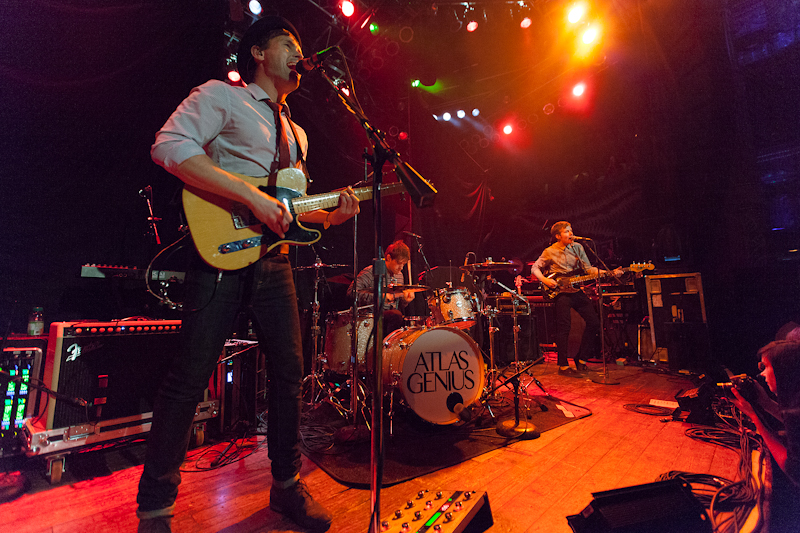 Australians. They’re just so charming, am I right? Like, who doesn’t love Flight of the Conchords (… oh, they’re from New Zealand? Well, you know what I mean). Ugh, and those ACCENTS. Forget it!

This happened. This kind of conversation actually happened at the House of Blues Monday night. It’s remarkable the kind of clout you get just from originating in Australia. That is, of course, depending on whom you ask. On a related note, the Atlas Genius show was all ages. You do the math.

The band does have a certain charm to them, regardless of their delightful and cheeky banter. They’re young guys with a poppy and wistful sound. At face value, it’s harmless and enjoyable – like getting into a fight where you can only swing at each other with feather dusters. They sing about girls (literally, they have a song called “All These Girls”) and name their tracks things like “Electric,” “Trojans,” and “Symptoms.” It’s all under the guise of moodiness and introspection, all dressed up in hipster suit and skinny tie.

I’m not trying to be facetious or maligning here. There’s a place for this kind of musical presentation (and I don’t mean Los Angeles). But there was something about Atlas Genius’ performance that refused to add up into something more insightful. Bands transcend their indie-pop monikers all the time, but Atlas Genius wasn’t one to make it happen on the Chicago stage.

It can’t be due to an unfamiliar landscape, either. They had a welcoming crowd (who seemed to be more forgiving than this writer) and have been through Chicago at least two other times in the past year. If anything, they might be worried about over-saturating the Chicago market. And while their image, sound, and tendency to play the “stunning Australian” card for prepubescent shrieks aren’t ordinarily my cup of tea, I certainly wouldn’t dock them for trying to make it out there.

Which means it’s about the music. Brothers Keith, Michael, and Steven Jeffery are crisp performers (as is Darren Sell on keys) and their harmonies sound velvety smooth. Still, the pieces never come together in any way that is either surprising or intriguing – it just feels inevitable. Being technically proficient and able to hold an interesting beat (which Michael does the best out of everyone in the band) is nice – and at times, they produce something that exceeds its entertainment value – but their musical success sounds more accidental than purposeful.

I wouldn’t throw in the towel on these guys just yet though. There’s a kernel of interest here and I saw enough on stage to hold my attention, even if it wasn’t particularly thrilling. So, they’ve only got one LP under the belt, but if I were a betting man, I’d say they sink the putt the second time around. After they release a new LP, I’d be happy to check them out and see if I’m right.

Atlas Genius at The Aragon Ballroom