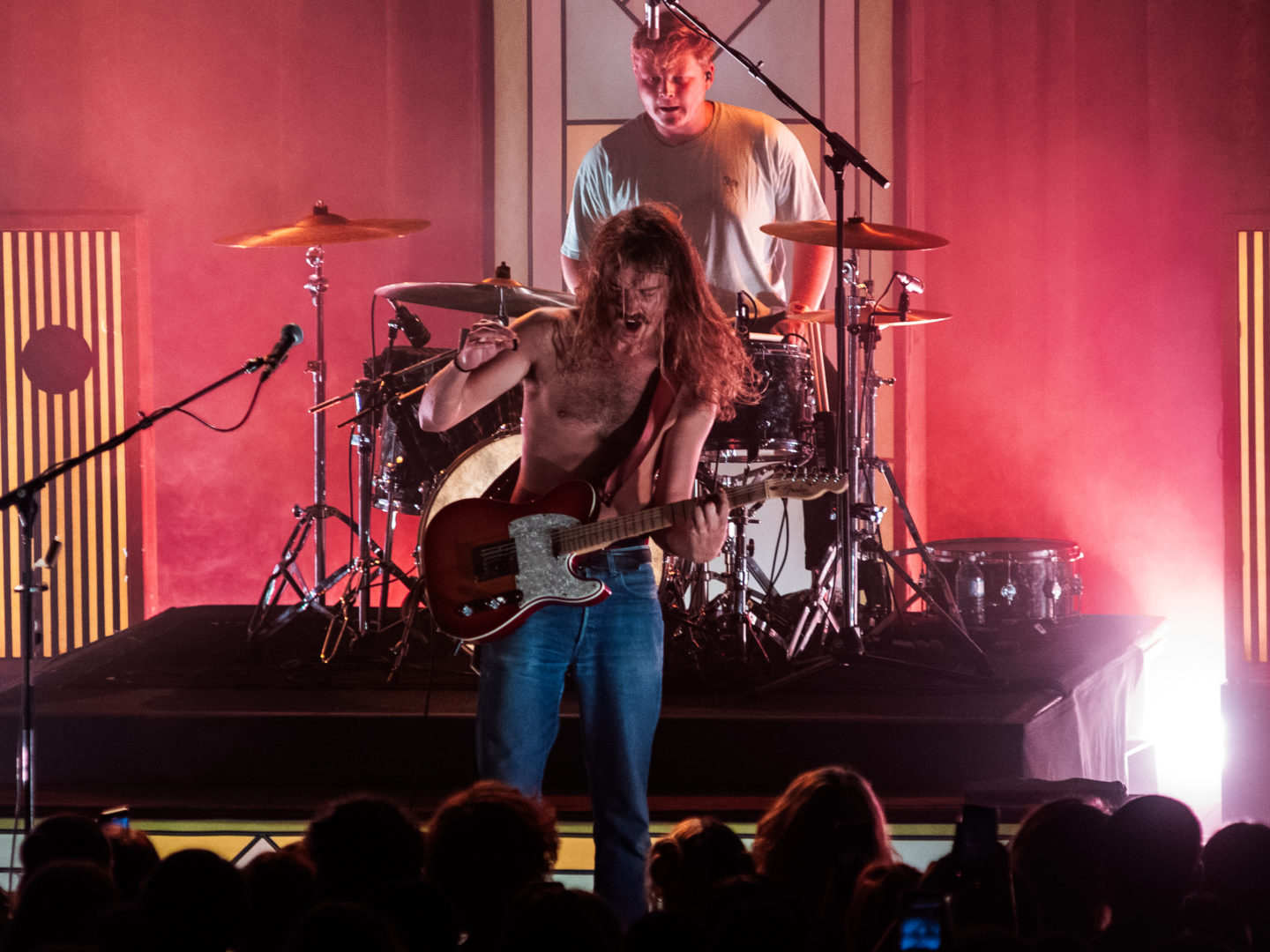 There is something so familiar and yet so different when you listen to The Backseat Lovers. They start their show with the swell of noise and production that so many bands begin with and launch into a massive room-filling introduction that whips the crowd into an expected frenzy, yet then they divert instantaneously into the toned-down intro of Just a Boy. There’s a vibe and groove that is uniquely their own throughout their music, and that becomes more apparent throughout their live show.

Just when you think a song will go in one direction they set course to something wholly different yet connected to the rest of the song which is so refreshing. This is their whole sound. From the riffs that Joshua Harmon and Jonas Swanson lay down to the fierce drumming of Juice Welch and the stalwart backing of KJ Ward on bass, The Backseat Lovers seem to have a love for the rock that is the foundation for their sound, but also a desire to depart and adventure with tempo, rhythm, and explosive swells of energy that make their brand of rock so endearing.

In that same loveable differentness you can see the hardest jam session, especially from lead singer Harmon, come to a fever-pitch climax, and then a humble ‘Thanks, guys!’ There is no toxic bravado, just a group of guys that want to share their music with the world. “You guys are kinda, kinda sick!” These are the only words Harmon could muster in response to the Commodore’s lively reception of the Utah-based rockers.

Even when playing songs that have never been released, and brought out the rarely seen acoustic guitar gave them the chance to still release their battle cry. It is hard not to comment solely on Harmon’s ability to sing, cry, and wail on the guitar in a way that can get even the most hard-hearted concertgoer smiling and dancing, yet he never uses this ability to become a diva. His ‘garsh guys’ attitude is refreshing in a world of frontmen who really think they are the most important person on the stage. This is a cohesive unit, that works to each other’s greatest strengths and revels in what they have been able to do and how they have been able to effect such a reaction from the crowd.

Speaking of the crowd reacting, it only took two notes from the palm-muted opening of Kilby Girl for the entirety of the audience to lose their collective mind. Clearly, radio play of this banger has done the band well, and the sound of the crowd singing word for word clearly as loud as the house speakers projecting Harmon’s voice was evidence that this is truly a classic of theirs that will last the test of time. The fast pace, the drops, the tempo, and the rhythm switches exemplify all the ingredients that make The Backseat Lovers such an exciting listen.

As I keep recollecting back on the night, the word that keeps coming to mind that epitomizes the whole night is simply energy. They burst at the seams with it. Even their slower songs have a force emanating through that longs to escape and often does at the end with a mini jam session, and solo that plays around with the song’s lead lines in ways that don’t feel indulgent. They just unleash, and it is fascinating to see and hear.

Closing their set with Maple Syrup brought that energy to full throttle, transitioning seamlessly into Just a Boy and closing with an outro jam that ended with Harmon crowd surfing cemented the fact that this crew knows how to entertain. There was not even a moment of hesitation for the crowd to begin shouting encore the moment the last member of the band exited the stage. Unwilling to toy with their fans they reentered the stage, and in his signature lightheartedness Harmon re-greeted the crowd saying, “All right buckos! Thank you for being kind to us,” and proceeded to close the night with Sinking Ship. When the show finally came to the end, and the crowd filtered out you could hear numerous conversations about the event that had just been witnessed. No one in attendance that night will forget the mark that The Backseat Lovers left on Vancouver.