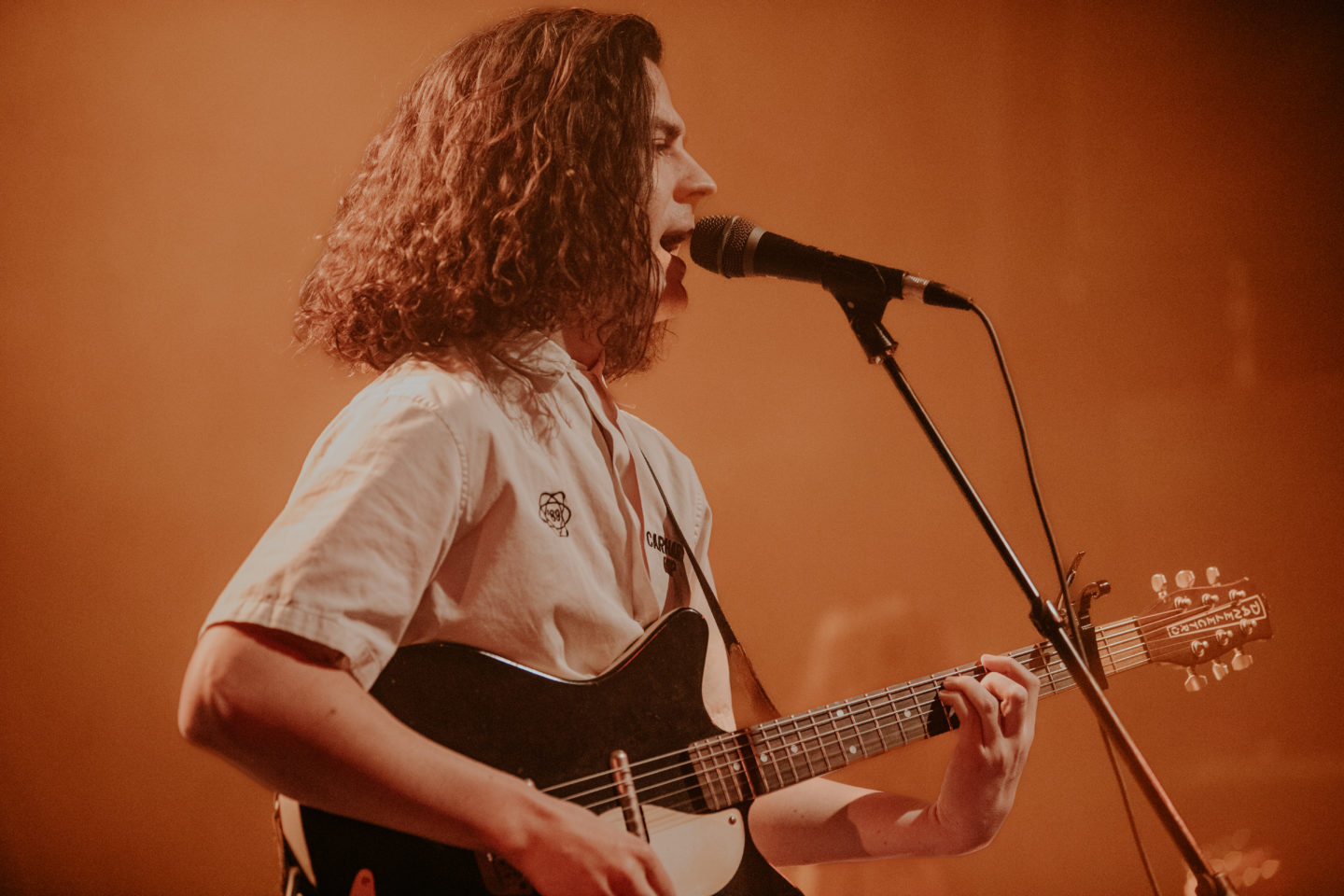 One thing to be said about any concert in Vancouver: the crowd almost always immaculately represents the core of the band they’re seeing. Upon walking into the Art Deco style Commodore Ballroom, a space that feels like a blast from the 1920s itself, a sea of tote-bag carriers, cigarette smokers, and crusty doc-martens wearing indie-folk were mingling, excitedly awaiting the locally loved band Peach Pit. Swarms of people were chattering and mingling, singing small tones of well-loved songs, up until the long-awaited moment of dimmed lights and quietly escaping guitar chords. The band emerged on stage amidst the dark, and the friendly acoustics of “Brian’s Movie” brought everything to life.

Cool lighting tones washed the room in a flush glow as the smooth sound of their self-titled song “Peach Pit” brought with it love and affection from the crowd. The entire set for the night was filled with singing, dancing, and a pure shared joy to be in the presence of such an influential local group. Vibrant energy flowed throughout the entire evening, as lead singer Neil Smith mentioned that performing at the Commodore to such a loving crowd was a literal dream come true, as he had recounted seeing his first concert at the same venue. The appreciation leaked off the stage and onto every person in the room, creating a shared sense of intimacy and enjoyment.

The biggest contrast to be noted was between the dreamy sound of vocals and guitar strums to the absolute shredding that happened on stage. The guys clearly had a fantastic time and held nothing back. Headbanging, hair shaking, jumping, and dancing would erupt in erratic bursts throughout the set. There were so many interactive moments, with lead guitar Christopher Vanderkooy being carried on top of the crowd for a solo, the band waving to and introducing their parents who attended the show, and many fun local anecdotes. For their recent hit “Vickie,” Smith surprised the audience by bringing his friend Victoria, which the song is about, onstage. A moment that brought smiles and cheers to everyone in the room. Many other fan-favorite tunes were also included, such as “Alrighty Aphrodite”, “Sweet FA,” and “Drop the Guillotine.”

The most notable moment in the show, and dare I say the most notable close to a concert I have ever experienced, was the band’s encore. After a myriad of “Peach Pit” chants and turbulent stomping, the band reappeared to close the night with “Shampoo Bottles” and “Hot Knifer.” As the lights went dark for what we foolishly thought to be the end to a sweaty yet satisfying performance, Peach Pit, along with their opening performers, came back out to the hilarity ensued sounds of “Darude Sandstorm,” equipped with sunglasses and laser beams. Each member then proceeded to crowd surf, to everyone’s surprise, across the onlookers, which emanated laughter and cheering before returning the band back to the stage. Definitely, a moment to remember, and one that will be hard to beat. Overall, Peach Pit’s performance was absolutely stunning, and I cannot wait to see
them again in the future.