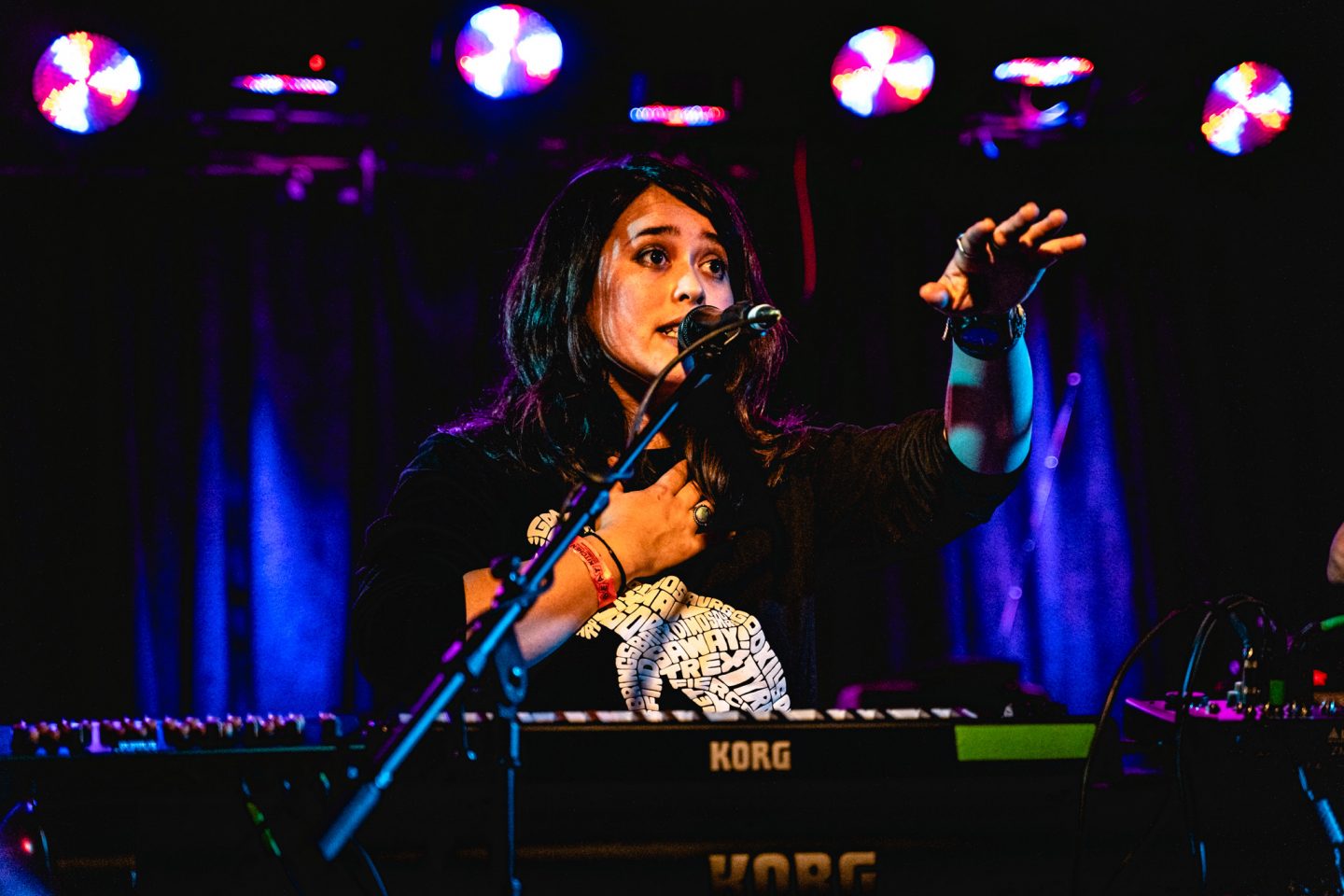 Chicago’s Beat Kitchen is a long standing institution for both local and national touring acts. It’s also quite small and cozy, like gathering around the fire, with its permanent Christmas lights ringing the ceiling and casting a moody glow across the room. Adding to the charm, the fixed stage lighting is often minimal reds and blues, with the musicians cast in shadow (making photography a real test). But this Sunday evening, the room felt brighter than normal as Boston formed Bent Knee took the stage.

The name Bent Knee comes from a truncation of the names of founding members, guitarist Ben Levin and vocalist Courtney Swain (Ben…tney). The two met at Berklee in 2009 and as the name might suggest, the two share a musical brain and absolutely, a deep creative vision. Surrounded by a gaggle of talented musicians, Chris Baum on violin, Jessica Kion on bass, Gavin Wallace-Ailsworth on drums / percussion and Vince Welch on keys / synth (oh, and everybody sings too), Ben and Courtney lead a dazzling display of pop, prog, avant-garde indie rock that makes it sound like there are twice as many people on stage than there actually are.

The show was sold out and the room was completely full, before Bent Knee ever took the stage. Even though they were on the bill this evening as support for Thank You Scientist, I would have to guess that many people knew about the amazing stacked bill, and showed up early accordingly. As I squirmed my way around the front of the stage grabbing photos, there was no shortage of fans pumping their arms and singing all the lyrics. One fan, at the stage steps house right, was her own mini mosh pit and I was battered a few times with flying dreads and elbows. I have to admit, I had never heard this band before, but it took literally about 30 seconds to be pulled into their atmosphere and convinced. They masterfully own the stage and have a certain, I don’t know what, that you can’t deny. Nobody in the room could…nobody left the space, nobody chatting, everybody’s eyes glued to the stage for the entire set. I don’t know what better testament to a band’s appeal you can get than that.

Bent Knee has a deep catalog, going back to 2011, but might as well just start with 2019s You Know What They Mean and especially the tracks “Bone Rage” and “Catch Light.” And, I’d also put this powerhouse group on your “follow” lists and prepare to see them back in Chicago again soon on a bigger stage.