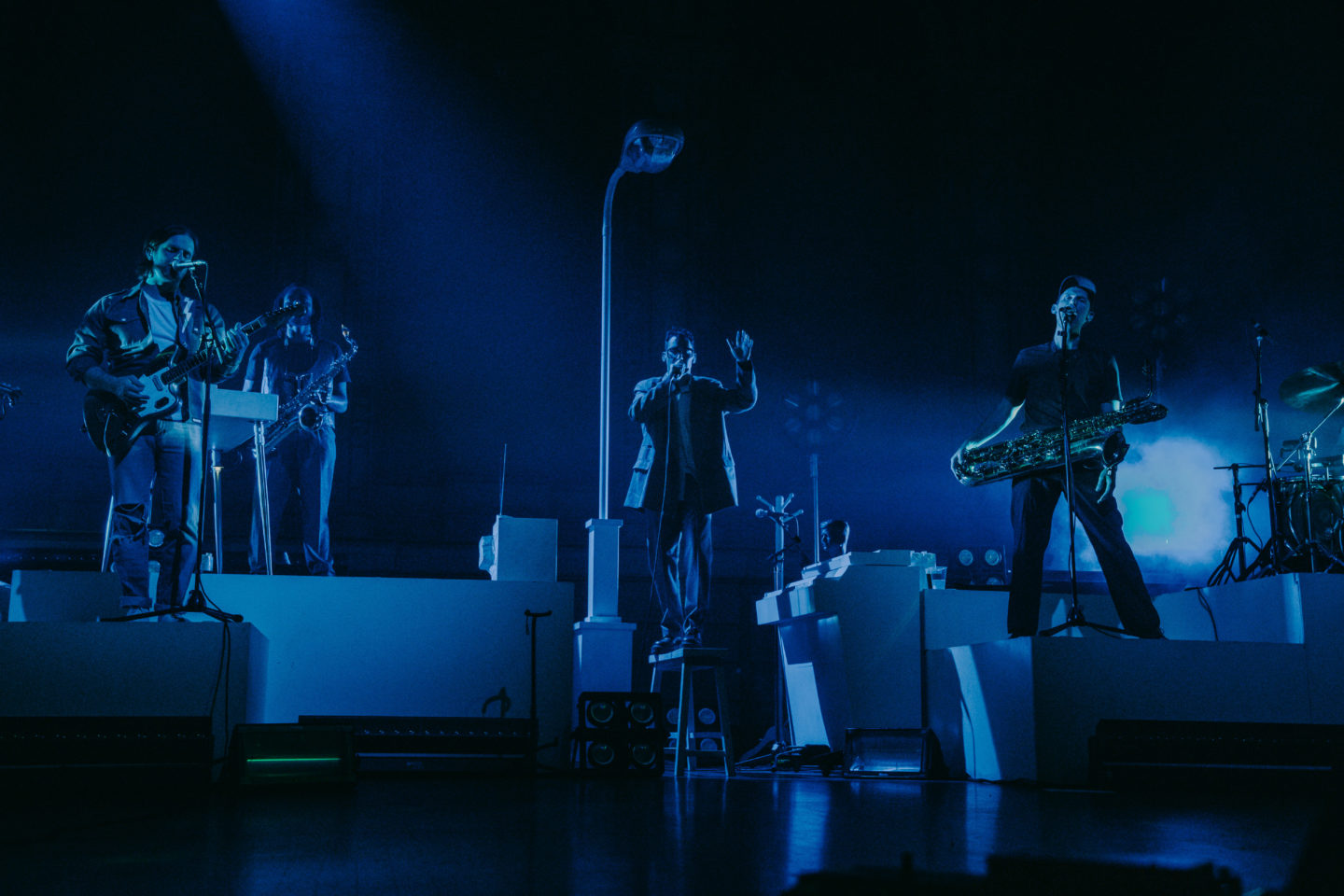 Before a show, I try to make predictions about what to expect in a performance based on the music they play over the house speakers. When I heard a variety of pop-punk and even the likes of NOFX before the opener, I had an expectation in my head. When Bleachers switched to an all ABBA pre-show playlist, I then realized, I had no idea what to expect. Surprises are the best.

It began with frontman Jack Antonoff standing in front of a solitary light, flickering as he pretended to adjust the makeshift television. This sense of solitude was amplified by the lyrics of “91.” Understanding emotional trauma and its presence in and through family is a harrowing way to begin a show, especially as many of us over the last years have caught ourselves stuck to the images of hurt. He is mimicking doom scrolling of the nineties, but it is prescient in 2022.

Never allowing their audience to wallow, Bleachers moved through to the crescendo of sound and lights of “Wild Heart.” They show the energy and earnestness from the get-go that will persist throughout the entire concert. The drums, the keys, the guitar, and the horns (Oh, the horns) came together with the superb light production. Everything felt over the top, yet never indulgent. It’s clear, at the outset to see the New Jersey influence of The Boss, as everything about the production harkens to Springsteen and the E-Street Band.

It is hard to express the energy at any given point of the night. Bleachers are so in tune with each other that it doesn’t matter how many instruments are playing, or how much running around the stage is happening, nothing ever gets lost. You would think that two drums at once with saxophones, guitar, vocals, and a light show would become at best an overwhelming dizzying display, and at worst a cacophonous disaster, but the symphony of it all works like a finely tuned watch, each part lending to the other, never needing to take centre stage, and always adding to the whole. Experiencing Bleachers, I cannot help but feel that the reason you do not drown in the sound is due to the brilliant production mind that has garnered Antonoff six grammies orchestrating, in tandem with the sheer musical brilliance of Evan Smith, Mikey Hart, Sean Hutchinson, Mike Riddleberger, and Zem Adu. Missing any part of this apparatus, you feel that the size and scale of what this concert achieved would vanish instantaneously.

With all this energy, the quiet moments that the group hit also echoed in the sheer contrast. Most notable of these was when Antonoff broke down a two-note synth sound. A blaring, drone, that for him represented everything Bleachers is about. The two notes represented darkness and hope,

“You take it away and there is nothing but anxiety.”

Stopping the drone, the metaphor was palpable. This sound is what inspired Jack in his darkest places and has been the theme of everything that he does with Bleachers, finding hope in the greatest of darkness. It is evident in all that they performed, in all that they produce.

This is what will stay permanently imprinted on me as I look back at the night. That joy and sorrow are not to be separated but understood rightly. In darkness, song and music and joy can ring out. That is what Bleachers do, they are an endless dance of joy and sorrow, beauty and joy not weighed down by the darkness of the world, but rather as an act of defiance against allowing that darkness to win.

Bleachers at The Aragon Ballroom

So much energy, it even spilled onto the streets afterwards