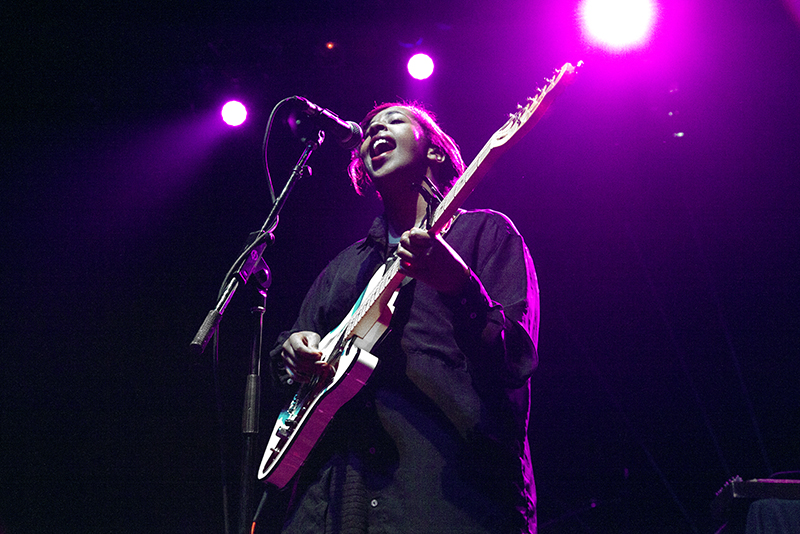 Cold Specks at The Vic Theatre

Breaking through the silence of the crowd’s anticipation, Cold Specks got into everyone’s mind immediately disarming any inhibition with her soulful a cappella intro. This pretty much set the tone for the set. Slow, low and anything but hallow. Al Spx (Stage name Cold Specks) was accompanied by 3 bass-slinging gentlemen. One bass guitar a couple saxophones that ran the tenor and baritone scales and a third on some percussion and tracks. While Cold Specks remains in her most confident stride throughout the set, the slower muted tones from behind her seemed to be casting her down. It’s sort of as if she was singing her song of what she longed for all the while the instruments became personified as those who got in her way. Together making the scene of an audible battle. Had we seen some brighter sounds like a trumpet or violin or flute I feel this would be much less the case.

The sea is calling. Everyone has that moment where they look onto a body of water you can’t see the end of. You can fascinate what lies beyond. Dream of a better place. The music of Cold Specks is your boat. Not only because the slower base lines feel so incredibly much like a tug boat, but all of the sounds together making the rolling of the waves in your mind. Because this music is so raw at it’s heart—as it should be to keep the focus on Cold Speck’s voice—it’s easy to imagine yourself in all sorts of places as you listen.

This opening act at The Vic Theatre received loads of support from the audience. Loud claps and cheers after each song. The crowd was drawn in and lullabied along. All until the closing a cappella that is. While Cold Specks stood with her tea cup steaming in her hand—creating mostly the vision of someone singing on the subway tracks to me—she sang the last few words of her final song and exited the stage. As the lights came on I realized that was really quite the abrupt ending.