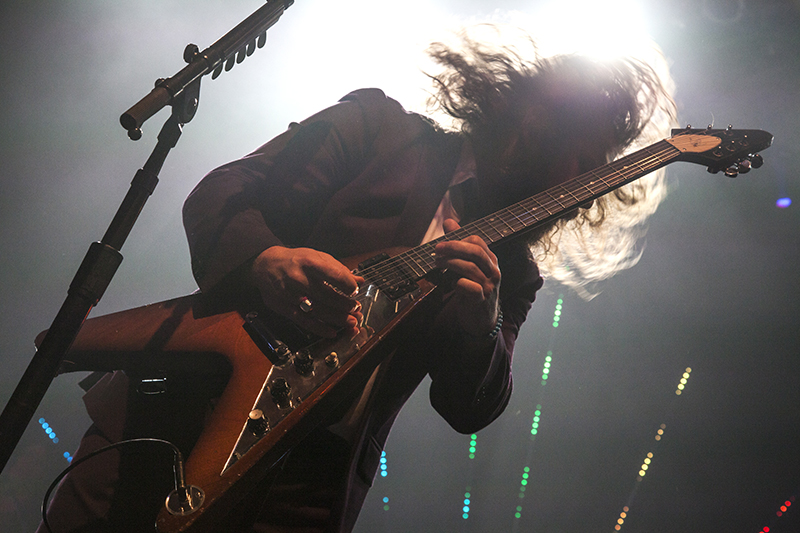 Don’t be fooled by this sullen indie-rocker’s recorded works. Jim James will rock till the sun comes up—and teach you to dance while he’s at it. Easing into this 4-20 set which followed opening artist Cold Specks’ muted bass- and vocal-driven serenade, Jim James and company warmed up the crowd with some of the smoothest organ riffs imaginable. The My Morning Jacket front-man was in the spot light and simply by opening his mouth lyrics formed and glided along the organ sounds into our heads. This layered couple was only pierced by the cheers of what was certainly an intoxicated crowd. Only this audience wasn’t necessarily intoxicated from celebrating the common North American 4-20 holiday. They had been shot up with a maximum dose of Jim James right into the brain. Not in the expected way of through the ears either. This drug was forcefully entering via every orifice possible. Ears, eyes, nose, mouth, maybe even some of those weird Matrix link plugs in the back of the neck. People were living this. Why wouldn’t they be? James was a man of the people. Reaching out and showing his affection to them. Even grabbing a hand or two. It was obvious he respected us—so naturally we gave the love right back. Infectious.

Illuminating the stage from the rear was a rising / setting sun built from LED lights. The more James danced, the more the stage would glow. This shit was rainbowbrightastic! The extended intro to State of the Art – A.E.I.O.U.—opening track from his debut album ‘Regions of Light and Sound of God’—took a musical tour that some entire sets never see. Everyone was getting theirs. This live performance may have had one man’s name on the ticket stub, but this band was woven into a cohesive quilt that would make even your grandmother proud. After some more shredding on the flying V guitar positioned at the front of the stage the song finished with a crash. “This is certainly more upbeat that expected”, I recall thinking. And dancier! Don’t worry if you get out to see this live set and haven’t brushed up on your latest hippie-step. Jim James being the caterer to the crowd that he is will gladly show you plenty of moves that are sure to inspire. Side to side slides and jumps down and up blended with some head banging goodness. Everybody dance!

Yes, the show had taken another unexpected turn for the best. I’m confident saying that even if My Morning Jacket seems a bit to down tempo and even if his solo recorded material seems too smooth for your liking, this live set is something that music appreciators, collectors and critics alike can all enjoy.