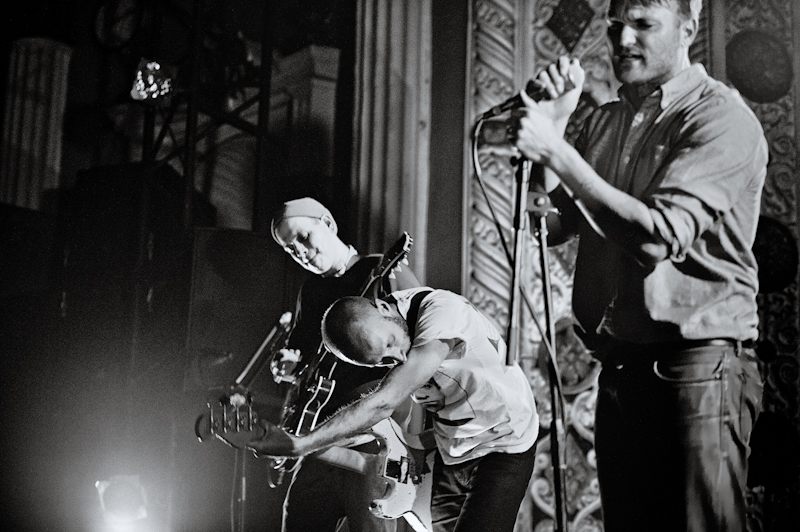 Sometimes I forget how stupid crowded the Metro can be for a sold-out show. It can get bananas. The super-wide floor was at a sardine-level critical mass Saturday night. It’s enough to make a guy wonder just how these kids keep their spirits up when they’re shoulder-to-shoulder with the sweaty youth of America.

The lights dropped on a crowd ready to go bonkers for Cold War Kids and the vibe was instantly defibrillated. This was a testament to these fans’ resolve. On stage before CWK was a small group from LA called Houses, who were absolutely fantastic and absolutely somber. My writing compatriot was wise to note that, while Houses put on an excellent set, they seemed out of place given the CWK tone of southern jubilance and no-mess rock.

The point was made moot, anyway. CWK hit the stage with a slow and steady bassline from Matt Maust. As a bassist, I come down hard on my fellow lowtone citizens who lack imagination, and I was I nearly guilty of committing the same crime against Mr. Maust. It would have been wholly unfair, however. This guy came out all style and short on substance, but as I came to appreciate the CWK live performance more, I totally reconsidered my position.

These guys are the embodiment of the well-made machine. Having just released their fourth studio album (Dear Miss Lonelyhearts) in seven years, you can see what I mean. But they extend the metaphor into the structure of their music.

Cold War Kids plays pop-rock. It would be easy (but foolish) to stop the analysis right there. But in between the lines is a band dedicated to musical nuance. I guess I had always known this – their first album, Robbers & Cowards, was on repeat in my iPod for a good many months – yet I still lost track of these guys over the years. Other people (many of them present at this show) weren’t so careless.

All of that consideration was on display. So powerful was their ability to balance deliberate and precise rock riffs, woven together like a patchwork quilt, that even in their shittiest tunes, most trite songs, they still dig into something interesting, rad, or just plain fun.

We also can’t avoid the tenor of Nathan Willett’s voice, which is nearly indescribable. Guys who reach his register usually have to get there with some trickery. They wind up sounding nasally or rely too heavily on a falsetto. Not this guy. He glides through the upper register with a commanding timbre with a strange but satisfying stage presence to match. At one point, he danced by shaking his hands in circles like a velociraptor (probably cross-marketing for Jurassic Park 3D). For whatever reason, it worked and the crowd loved it.

The other pieces of the puzzle are equally effective. Jonnie Russell and Matt Aveiro were practically journeymen on stage, sliding between instruments to really round out the sound. At the end of the day, you could close your eyes and mistake the band for a seven- or eight-piece operation. Impressive.

CWK’s newer material didn’t play as well to the crowd (conversely, you couldn’t stop the Metro from screaming the words to “Hang Me Up to Dry”) and I couldn’t help wondering why that was (other than the fact that I just don’t think it’s as strong). What do you do, as a pop band, when your moment in the sun has passed? You can’t not play the old stuff, but Conan O’Brien isn’t calling to get you on the air tomorrow.  If CWK is a band past its cultural prime, I left this show feeling like that’s an awful shame – they seem to be in the middle of reimagining what they’re trying to do at the smallest level and it’s paying dividends in the form of compulsive pop music.