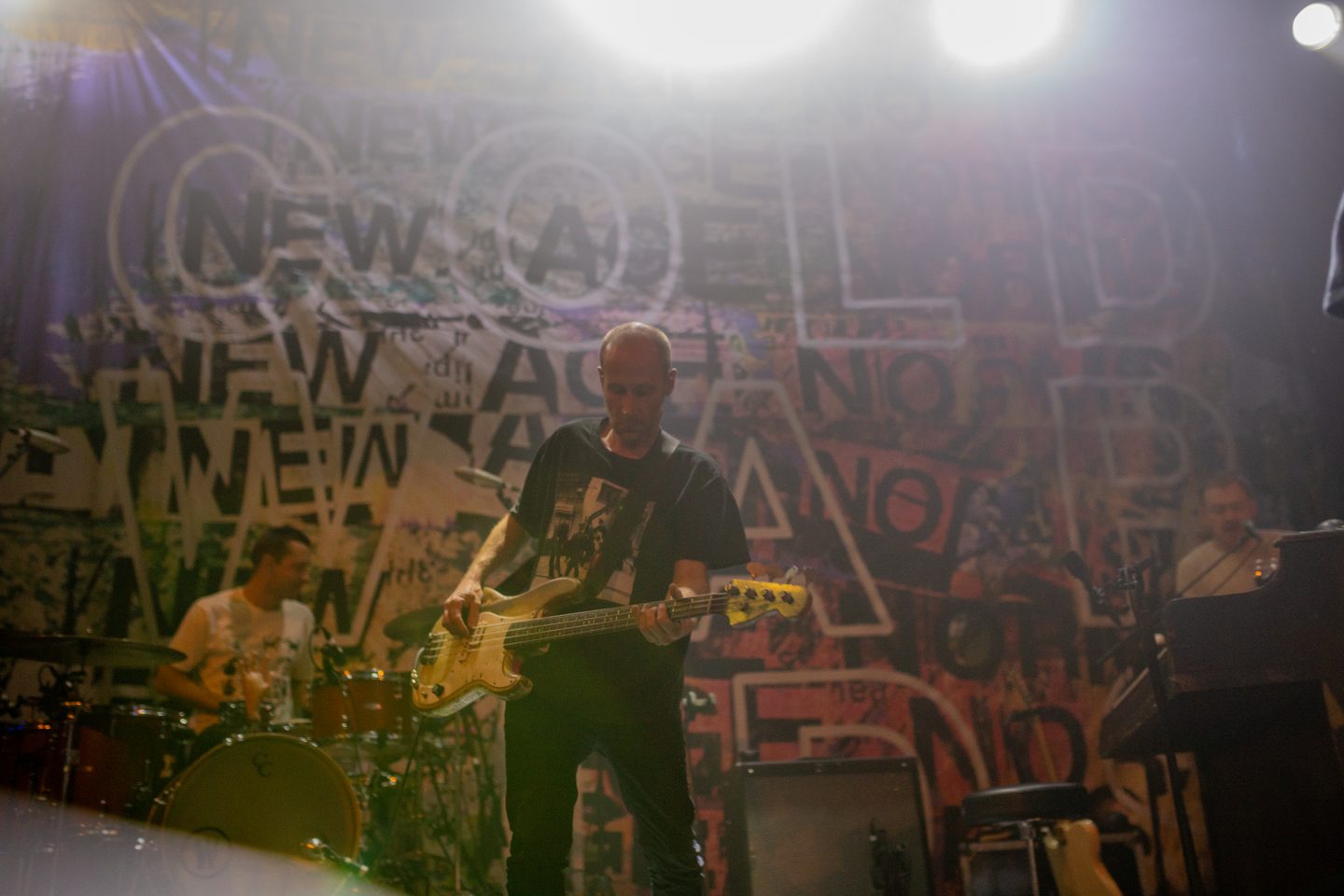 Amped up after the Overcoats opening act, I am surrounded by a sea of strangers standing shoulder to shoulder equally as excited as I am for the main event. As the techs set up the stage for the Cold War Kids, I notice that the back of the stage is adorned with the cover art for their latest album ‘New Age Norms 1’. I watch them replace the opener’s glittery drums with a dark black set for Joe and the keyboard is moved to the back of the stage. A very antique piano is put in its place, front and center. This piano has history.

The place is packed like a can of sardines—the show is sold out! The crowd is cheerful and lively. Everyone around me has a drink in hand apart from an extremely youthful group as close to the stage as they can get. Left alone, I can’t help but overhear the party behind me say that this is the EIGHTH time they’ve seen the Cold War Kids live. My spidey-senses are tingling, I can only expect nothing but a-m-a-z-i-n-g now!

Things kicked off around 10:15. The venue went pitch black and the crowd now silent. Next, we all began to cheer for what seemed like an eternity before they showed themselves. In actuality, it was probably only a matter of seconds, but it felt like forever.

Nathan Willet’s GIANT personality is felt right away as he spins into center stage bringing along a whiskey tumbler for the ride. He greets the crowd before sipping his drink and then setting it on the old piano. The band is a-go! They start the night with “Love is Mystical” then seamlessly transitioned into “Miracle Mile” to quickly pump everyone up. You could tell they were already feeling loose, immediately bringing all they had to the stage. Within seconds I was jumping in the air and clapping my hands following Nathan’s lead.

He easily controlled the crowd with his hands like a conductor in an orchestra. In ways it was a magical sorcery. His showy antics blended ever so perfectly with Matt Maust’s cool, calm and collected attitude. Matt was reserved and mysterious, in a world of his own, with his eyes closed as he effortlessly strums his bass. His passion for music was apparent, it was pure raw energy. Dave Quon also offered tons of charisma. He was dressed like a grungy bad boy wilding out and often stepping across stage to jam with the drummer Joe and battle Matt.

The piano acted like a center for congregation whenever Nathan played it.

They tried out tons of new material to promote their latest release ‘New Age Norms 1’ including: “Complainer”, “Calm Your Nerves” and “Beyond the Pale” which perhaps was the most memorable moment of the night. I say this because the band exited the stage after playing a few throwbacks, “Hang Me Up to Dry” and “Mexican Dogs”, while Nathan was left alone for what seemed to be a solo performance only to later be surprised when the Overcoats joined him in the limelight for a guest appearance.

The evening ended on a high note with their crowd pleaser “First” which was followed up after another seamless transition from “We Used to Vacation” into “Hospital Beds”, two of the best songs from their 2007 release ‘Robbers and Cowards’. The room was on fire! We absolutely wanted to see more. Without hesitation we continuously roared as loud as we could “ENCORE, ENCORE, ENCORE!” They did not leave us hanging and came right back out, finishing the night off with “All This Could Be Yours” and “Something is not Right with Me”.

I think it’s safe to say we all left that night in a spell bounded daze. What an epic night.