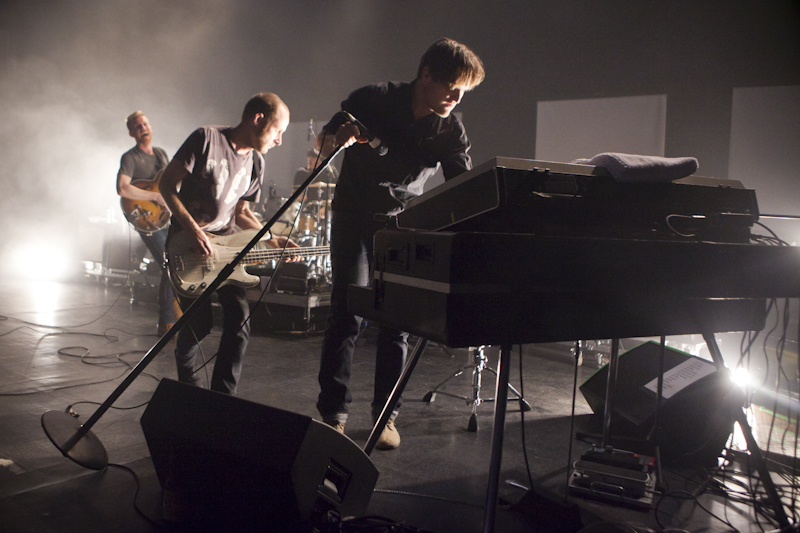 Friday, March 11, 2011 Will Rice Will Rice Chicago
Share the experience...

The quartet is currently touring in support of their newest album Mine is Yours on Downtown Records and the evening began with a couple tracks (Royal Blue and Finally Begin) from this album before setting off into a night that was filled with a mix of their new stuff and plenty of sing-a-longs from the previous  two albums to keep the crowd roaring. While some of the songs on Mine is Yours rely on a more polished approach for the studio version, their live show and delivery of these songs is no different than it has been for the last five or so years which is: 2 part blues, 1 part rock, passionate lyrics delivered loudly and finish off with loads of energy.

Lead singer and multi-instrumentalist,  Nathan Willett, requires a good portion of the stage for his mics, guitar and keyboards but shares the stage well with the entire band. Guitarist, Jonnie Russell, and bassist, Matt Maust, spent much of the night wandering all over the stage while dancing behind their instruments and obviously playing around with everyone on stage. Maust and Russell were both kicked in the ass at least once by Willett as everyone had fun dancing with each other and toying with the audience by hanging out at the front of the stage. No one left drummer, Matt Aveiro, out of the mix as they all took turns standing on his drum stage while staring at him, playing along and bouncing their heads as slammed his drummed sticks all the while keeping perfect time for the band’s instruments to keep going and the crowd’s asses to keep shaking.

All the good times the band was having definitely spilled over to the audience as the nearly sold out crowd yelled with Willett to some of the their favorite sing-a-longs like Red, Wine Success and Hospital Beds. But no matter how hard everyone tried, never once did they come close to drowning out his powerful and quite distinctive high pitched rasp. The band and the crowd were never in more sync than when the crowd  shook their fists in the airs and moved the dance floor during Hang Me Out to Dry as the band took banged out the tunes on stage and the lights flashed in a nearly black and white strobe.

The band did a wonderful job of busting out some great new stuff and letting the crowd get a chance to feel the songs instead of only hear them while still delivering some of their best tunes for everyone to knock off some of the late-winter blues. If their mission really was to Rock n Roll first and have fun second,  then I say: Mission Accomplished*

*Bonus point for making the entire audience Rock n Roll and have fun too.