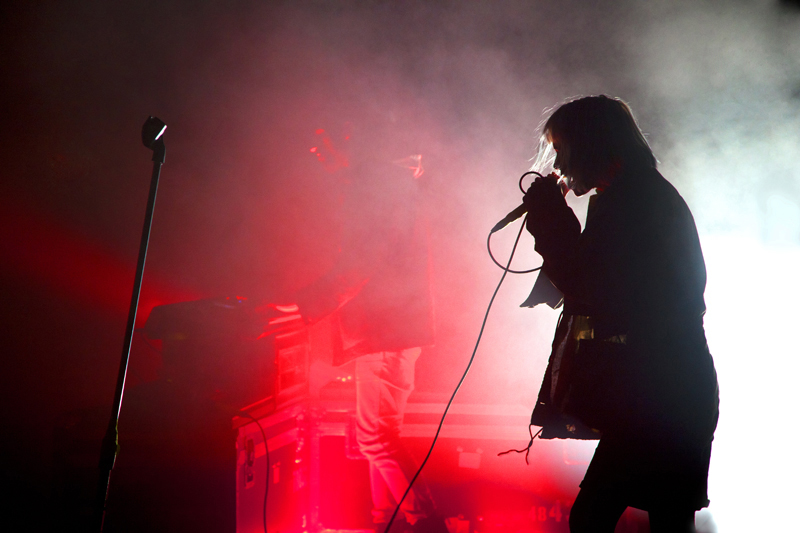 An Ode To The All Ages Show:

Hark – is that but a whisper I hear?
Nay, ‘tis a young buffoon asking for beer.
He dresseth in glow sticks, much like a Duke
He raveth ‘till midnight and drinks ‘till he pukes.
Security doth hamper the fun with a flashlight,
While sixteen-aged lasses rip hairs, scratch and cat fight.
Crystal Castles, they rocked and they never did gaffe,
I need only find ways to deal with young riff raff.

Yes, everything in that masterful elegy happened at the Crystal Castles show. Such absurdity is just unavoidable for all ages shows (at the Congress, no less). But you know what else happened that night? A majorly kick ass show.

I’ve never seen Crystal Castles live before, but rest assured I won’t be missing them in town ever again. What they lack in musical variation between songs they make up for with sheer, effortless stage presence. Alice Glass, the female singer and on-stage centerpiece to Crystal Castles, is a magnet for the entirety of the theater’s energy and electricity. What this woman can demonstrate between shouts, melodies, and stage dives is nothing short of prolific.

Of course, she would be in no place to get crazy on stage if it weren’t for Ethan Kath’s masterful electronic hooks and futuristic pop sensibilities. Kath works the stage in his own right, but it’s in step with the sensational light show that his beats and keys are really magnified. This stuff is loud. It’s exciting, it’s dance-y, and it is freaking loud. It’s also fun as hell. The light show was a symphony unto itself.

Glass didn’t just crowd-surf during this show – she crowd-STOOD. Yes, she firmly planted her feet in a throng of fannish hands and brought the microphone up to belt her lyrics as loud as possible. Like Kontravoid before her, I had no idea what she was actually singing about, but it sure sounded awesome.

Electronic music is not often my thing, but Crystal Castles is too infectious to act like an old fuddy-duddy. Even if I was surrounded by wee children, I didn’t feel out of place so much as I felt transported back to the freeing days of adolescence, where one great show could alter your entire perspective. And that was WITHOUT any ecstacy in my system. By the time Crystal Castles reached their encore, I had to look at the clock – I was completely oblivious as to how much time had passed. This show may have been a murderous assault on my five senses, but it was a warzone I’d happily return to any day.