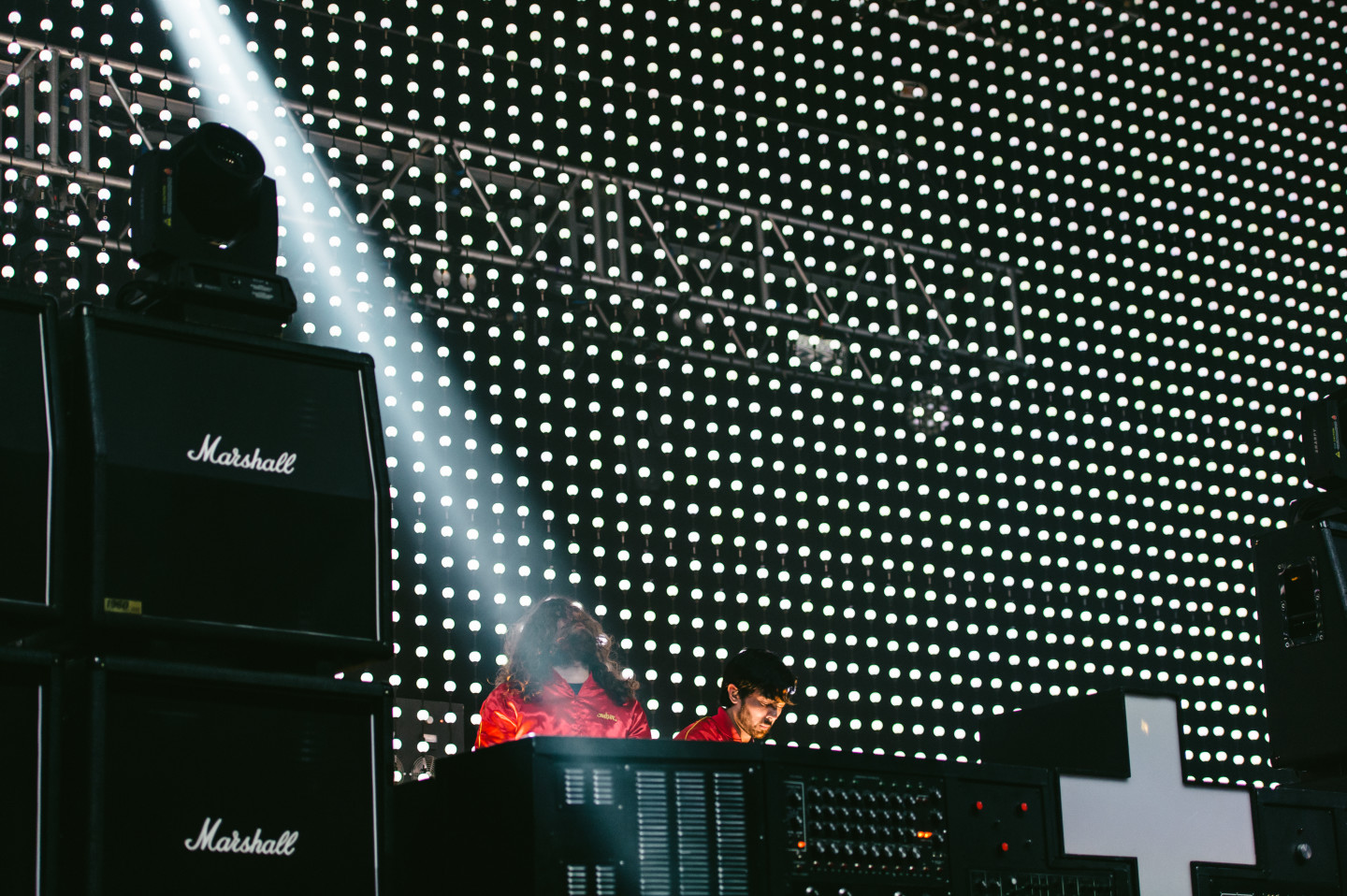 Since their debut LP, Justice has adopted a traditional cross as their ubiquitous band symbol. It’s not exactly Prince’s symbol, but it’s still pretty rad. Honestly, I never knew quite why they used this since their music never seemed to be outwardly religious (it’s mostly instrumental/electronic anyhow), but I think, having seen them live, I get it now.

The Justice stage setup at the Congress Theater on Wednesday night appeared a lot simpler than it actually functioned. The two French dudes that make up the “band,” donning what looked like bright red vintage Starter jackets, posted up center stage engulfed on either side by 3×3 stacks of Marshall amps. Well… sort of. Turns out those stacks of iconic rockitude were stripped of any audio functionality and replaced with a stunning light show inside. Behind the duo hung a long wall of strung together tiny white balls (Insert Mitt Romney joke here), later alive with more light show badassery.

And of course, front and center, was the quintessential cross, which illuminated once they began their set with the lead-off breakout hit from the Cross LP: “Genesis.” Ho-ly shit, did that set a tone. This wasn’t going to be your typical “hit crescendo,” beginning with liked-but-obscure tracks and work their way to a mega-hit encore. Oh, no. The duo jumped to light speed and never relented for nearly two hours.

That’s what I’m talking about with the cross. It’s meant to conjure religious connotations for sure, but to rework them into a totally new context. Seeing Justice live was like a love letter to their lifestyle: high-tech, high-octane, and a pure, sublimate nightlife.

Xavier de Rosnay smoked a cigarette for the majority of the set. Gaspard Augé jumped out from behind the equipment to play a piano that emerged on stage like a bright white deus ex machina. And the light show, as noted, was inventive, precisely, and outrageously full of win. Spotlights atop the Marshalls careened around the Congress in unison, the lit-up Marshalls themselves danced to the beat, and the entire stage pulsated with energy and violence – at one point during “Audio, Video, Disco,” I felt like I was running down the world’s longest hallway on the brownest of acid trips. Unreal.

So while this show wasn’t about Christianity, it was about the spirituality these two guys feel when energized in front of a massive crowd like this one. We were all extremely fortunate to be there and share it with them. Now if only they’d build a church, maybe I’d actually wake up early on Sundays.

Digitalism at The Congress Theater