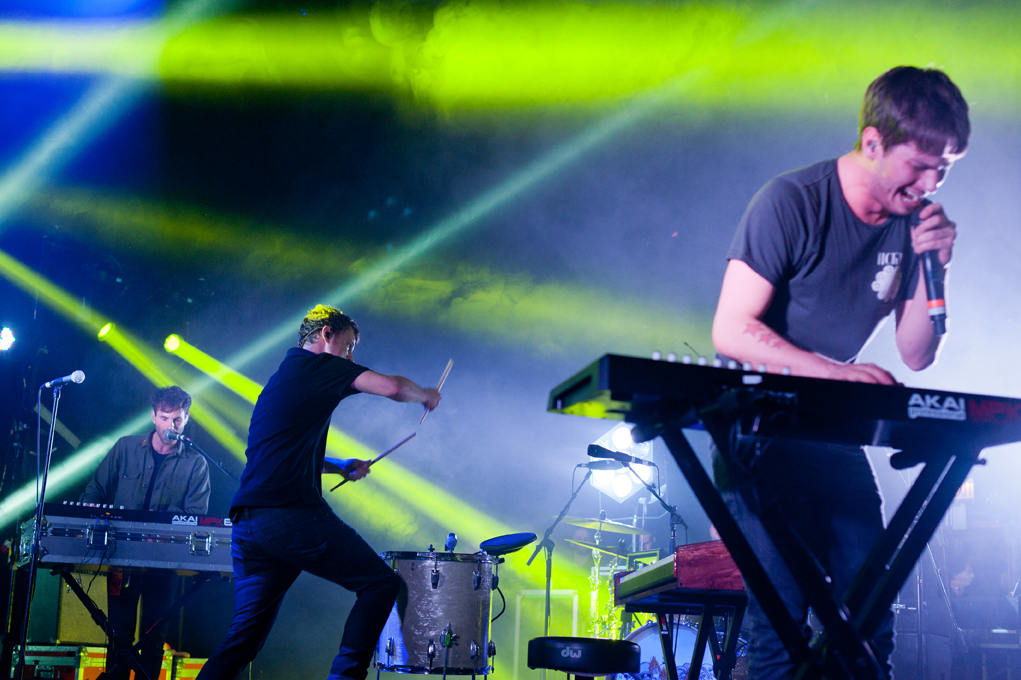 The meteoric rise of LA indie squad Foster the People continued Friday night when the group played to an enthusiastic, sold out crowd at the Riviera. A year ago you could be forgiven for assuming Foster the People was an earthy non-profit focused on wellness through reflexology and herbal supplements. But faster than the bullet they sing about on their inescapable single ‘Pumped Up Kicks’ they’ve grabbed Chicago’s collective attention, bringing a sound that is at once familiar and fresh to a city welcoming them with open arms. Here’s my play by play from a super solid night at The Riv…

The experience of catching a show at The Riv starts just before you enter the building. Most folks gather for a drink just around the corner at the Green Mill or Uptown Lounge. This show had the buzz of something big, with the masses gathered early, ready for a big night.

Make no mistake, my seating game was off. I ended up in the upper balcony (nose-bleed fringe), with pangs of wishing I’d arrived earlier bolstered by the last few songs I caught from opener Reptar, a promising psychedelic electro–pop outfit that had just the right amount of punk thrown in. Super solid act – great crowd interaction, got everyone warmed up, most notably the crowd-pleaser ‘Stuck in my ID.’

As the buzz continued to build I admit I had a bit of doubt for the California Trio. These guys grabbed large scale notoriety not too far from Passion Pit or Phoenix–seemingly overnight–which is a heck of a lot to live up to. I had to ward off flashbacks of MGMT’s 2010 gig at The Riv, a performance that… well, it sucked. Given some of the similarities of the sound, I thought I might be headed down that road again. The good news is those fears were quashed from the very first note.

Ok, a few things I like about this band. For one, they seem genuinely surprised by their success. Their overtures to the crowd felt real, and hell, even if they were feigned, it was such a gracious act I don’t really care. Another thing I like? They’re cooking with gas, man. They kept it in high gear for the whole show – didn’t let up, didn’t coast. Front man Mark Foster shimmies around the stage a bit like Tunde Adebimpe from TV on the Radio. He keeps the energy high. He had the crowd in his hand from the jump, whether it was senior citizens or undergrads (really – there were a shocking amount of AARP members in attendance).

They rarely took breaks between the songs, just a light baseline between each track, which kept the pace high all night long. Something that stood out was their ability to build up several of their songs (sort of like a DJ). Early jams like “Miss you” and “Call it what you want,” stretched out breaks that built the anticipation to its brink before rocking out. And, I mean REALLY rocking out (MGMT, you could learn something from them). Also, big ups to Mark Pontius, the drummer who was absolutely on point, very nearly stealing the show.

Foster played everything from their album, stretching the time with every b-side in their catalog. The set-list made sense, and their encore performance of “Pumped Up Kicks” sent the kids home happy.

Mid-way through the show I snuck down a bit and took inventory of the crowd. Checking the pulse of the people, I saw the dead giveaways of a successful show. Rapt attention directed to the stage with smiles, claps, whistles and nods of affirmation confirming what we knew before the show started – Foster the People have arrived, and they couldn’t have come fast enough.

Art vs Science at Lincoln Hall