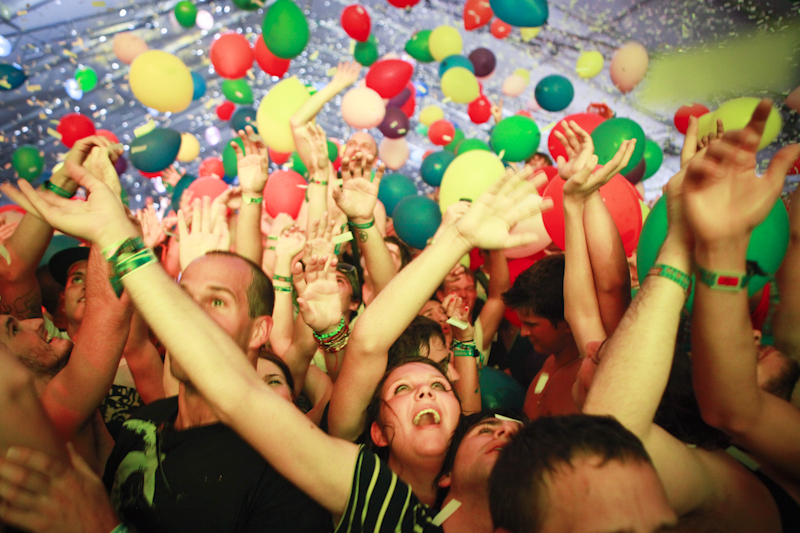 It’s Friday night at Perry’s stage at Lollapalooza 2011. This year, it was much more so a giant tent erected for dance party purposes than it was just a stage. The trampled floor was covered with crushed beer cans and a thousand plastic rings from boxed water drinks. People are elbow to elbow and it’s Miami humid up in that tent. It’s 8:45 and everyone is waiting for 30-year-old Gregg Gillis, the guy behind Girl Talk, to kick things off as a headlining act. People are anxious for things to get going but there is no sense of irritability in the air. Instead, there’s an unmistakable vibe of joyful anticipation. People want to party. People want to dance. And they want to do it with Girl Talk.

Minutes to 9:00 p.m. the lights go dim as an unidentifiable word starts to creep from the speakers. Slow and drawn out, the murmured sound is repeated and the pace starts to speed up. The accelerated momentum reveals the mystery word to actually be two separate syllables that form into a chant: Giiiirl Taaaalk – Giiirl Taaalk – Giirl Taalk – GIRL TALK! Gillis then took the stage and addressed the crowd. “God damn, it has been a long day, front to back. I don’t wanna’ do a God damn thing right now but turn this motherfucker out in a way that it’s never been turned out before.”

Groups of friends made room to dance at the first sound of the beats dropping from “Night Ripper”. Mashups of Notorious B.I.G., Ludacris and The Black Eyed Peas tracks were all reborn as a Lollapalooza soundtrack to remember. There was sweat. Lots of it. And no one cared. Smiles were as common a sight as sweaty t-shirts among the crowd.

There was one person there who was not smiling the whole time and that was Gillis himself. Deep into his closing set his tour manager was threatened with the plug being pulled on his show because of the number of people rushing the stage. Once word reached Gillis he went off. He stopped his set and grabbed the mic to announce he hates the idea of an all electronic stage at a festival, griped about the sound, called the entity of Lollapalooza an asshole and stormed off stage. Outburst aside, the crowd still loved him and chanted his name to come back. Moments later he returned to the stage and finished the remaining 20 minutes of his set. All was right in the world again.

As if the forgiving and joyful party goers weren’t enough to make it feel like a legit celebration, there were toilet paper guns and a balloon drop too. Confetti and bright colored balloons rained down on the crowd closest to the stage. It was like New Year’s Eve in August. Come the close of the show, people were out of breath and perhaps even at risk of exhaustion. If they had the air to speak, it seemed everyone would probably want to announce the same thing: Ain’t no party like a Girl Talk party ’cause a Girl Talk party just raaawks. Even when Gregg has a bad day.