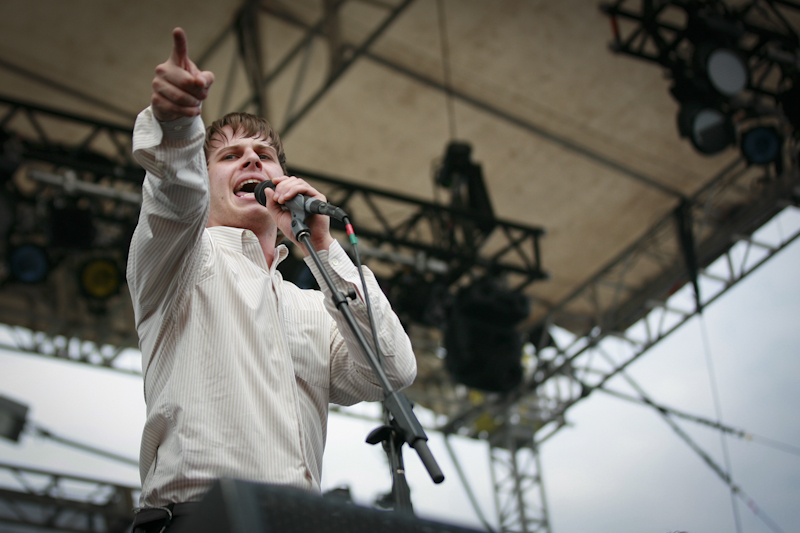 The crowd gathered for Foster The People’s Friday set for Lollapalooza was so large that it could have eaten the crowd from previous years. Seriously, you expect to walk elbow to elbow for headliners, but it is downright rare for a 3:00 artist to pull a mob of that magnitude. Band frontman Mark Foster was humbled, stating it was by far the largest crowd for which he, Cubbie Fink and Mark Pontius had ever played. The crowd cheered in excitement, grateful to be part of something special for the artists who have helped define music in 2011.

When the band was last in Chicago on June 12 to play a sold out show at Lincoln Hall, Foster wore a gray t-shirt and jeans. Oddly enough, he decided to forego casual comfort this time around despite the whole hot outdoor festival detail. Dressed more for a wedding rehearsal than a sweaty concert, his chestnut hair was quickly matted to his brow – though that didn’t slow down his now signature shoulder bounce.

With thanks to every great song from the band’s debut album Torches, the atmosphere of Grant Park felt breezy and uplifting despite humidity in the air. Infectious tracks like “Helena Beat”, “Waste” and “Don’t Stop” carried over countless bobbing heads. A big bonus to catching a band live is when artists share insight on song meanings. Foster shared his point of view that things in life can’t be put in neat little boxes of either black or white; that he believes in 1,000 shades of gray. That was the preface to “Call It What You Want”. (Right there with ya’, Foster.) The band also did a cover of Neil Young’s “Heart of Gold” that brought an updated sound to the 1972 classic. Hit songs like “Pumped Up Kicks” and “Houdini” enlivened anyone on the verge of heat exhaustion.

Come the end of the set, the massive crowd dispersed, each satisfied fan on their way to seek out another act that would live up to the live experience like Mark Foster and his comrades just had. Call them indie-rockstars, call them lucky, call it what you want – but Foster the People knows how to entertain the people.