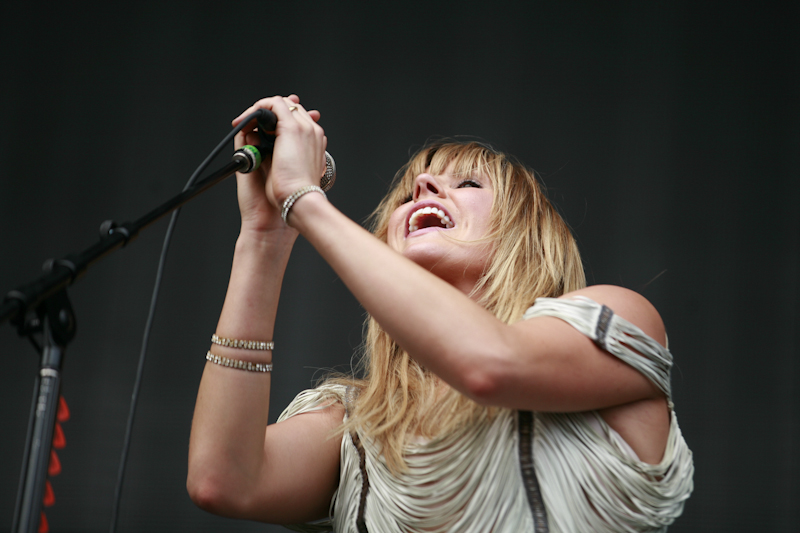 Grace Potter & The Nocturnals at Lollapalooza 2011

Taking the stage on a hot Friday afternoon, Grace Potter & The Nocturnals sizzled on the Bud Light Stage. From her Janis Joplin-esqe voice to her Tina Turner style (think super short dress and legs any woman would die for) Grace Potter was by far the hottest performer of the weekend – and arguably one of Friday’s best performances.

Playing on the same stage headliner Coldplay performed on later that same night, the Heidi Klum doppelganger opened with “Ah Mary,” followed by “Only Love.” By the time Potter was belting out “Hot Summer Night,” the men in the crowd were in love and the ladies just wanted to be her. Moving effortlessly from the keys to guitar and home at the microphone, Grace is just that – full of grace. She’s also spirited and funky – and can arrest your attention in a memorable way. During her most popular song – “Paris (Ooh La La)” – she drew in the crowd by singing, “Ooh La-La Lolla-pa-Looza.” Not sure she could be any more charming.

There was definitely pre-Lolla buzz that Grace Potter & The Nocturnals were one of the acts to not miss this year. They were right. They had it all; strong vocals, killer job by the band, engaging performance, high energy and even a big white tiger on stage. Couldn’t ask for more.