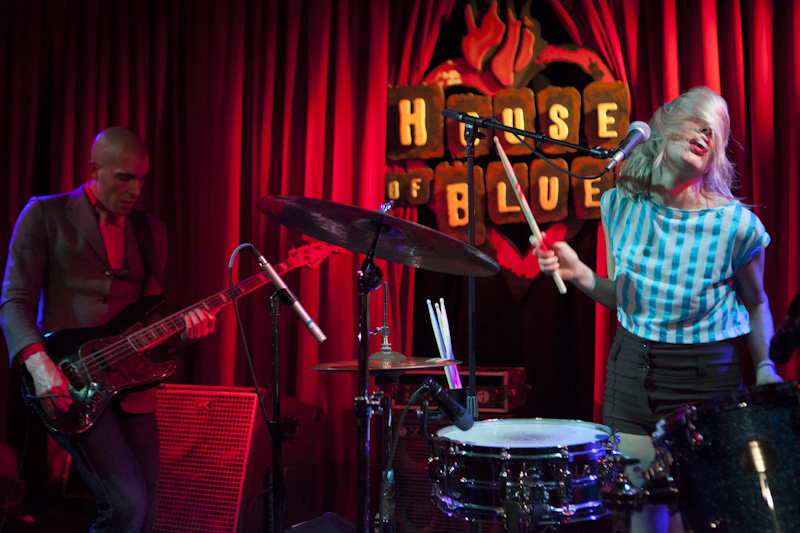 Wednesday, May 25, 2011 Ben Dahl Will Rice Chicago
Share the experience...

Hank & Cupcakes is the best band you’ve probably never heard of. Two musicians in hipster camouflage from Brooklyn, the confusingly named Hank (His real name is Ariel.) and his aptly named wife/partner-in-crime Cupcakes (Her real name is Sagit, but for some reason the moniker Cupcakes just works.) create music for make benefit glorious nation of United States.

They’re actually from Israel not Kazakhstan, but as soon as they start playing the only location that truly matters is where they’re currently standing. Which, depending on where they are in their frenetic dance party of a set could be anywhere. Hank is a pedalphile (note the spelling). He has more pedals within leg’s reach at any one time than a Nascar pit crew. As the man in charge of bass and samples, he’s probably not too far from base camp. Cupcakes on the other hand is a whole different story.

With the energy and pure volatility of Joan Jett clad in the tight ass boy shorts of an American Apparel model, a microphone is nothing more than an afterthought for the talented vocal stylings of the lovely Cupcakes. Overpowering the sound system isn’t much of an issue when you’ve got pipes like she does, so she doesn’t exactly have to stand behind the drum kit and in front of the microphone. She was more than happy to prove this to everyone in the audience as she did her best Mix-A-Lot impression from atop the drums. It’s musical porn for your eyes and your ears, sonic Red Bull for your libido.

They might be telling everyone that “there ain’t no love” but based on my vibrating loins and ringing ears that’s a bunch of bullshit.