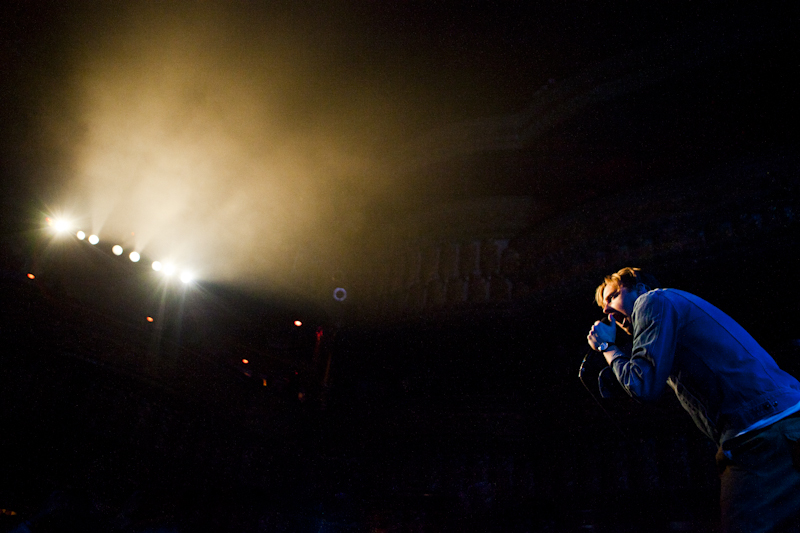 Pair song after song of crowd-rousing rock with the flabbergasting antics of Ricky Wilson and you’ve got a one-two punk-infused theoretical punch that you won’t soon forget. Kaiser Chiefs is a band that can boost you right out of your seat and deliver you to the doorstep of live music rapture from the very first song. This is a band that needed no time to warm up the crowd for what was a highly entertaining set at the House of Blues Chicago.

The five English lads took a bite out of 1980’s pop culture when they walked out on stage to a reworked sample from hit Dire Straits song, “Money for Nothing”. The words “I want my…” were stretched out and repeated before taking full shape into “I want my MTV” as the band casually rolled on stage and took their instruments. I pretended for a moment that the crowd would change the chant into “I want my Kaiser Chiefs” but there was no time for that, as the band had already jumped straight away into playful track “Na Na Na Na Naa”. Frontman Wilson commenced his energetic shimmy across the stage, tambourine in hand, eccentric moxie at full force.

I may actually have pages of notes strictly about what the man did with his mic stand throughout the set. Simply put, Wilson straight up made that mic stand his bitch. In fact, he did so many things I’d never seen done with a mic stand before that he inspired me to name some of his moves. First was “The Scarface”: He tossed and twirled it in the air like a baton, caught it and pretended it was a machine gun – all within four seconds flat before slamming it back in place. “The Rocky Balboa”: Perhaps channeling a boxing legend, he threw jabs at the mic stand with hunched posture and great concentration. And lastly, “The Missy Elliot” wherein Wilson laid it down, flipped it and reversed it. Yup. All that.

Really though, the kooky mic stand spectacle was just the co-star to the real thing on spotlight; the music. “Ruby”, “I Predict A Riot”, “Every Day I Love You Less”, “Oh My God”, “The Angry Mob”. It was like a playlist of one sing-along worthy song after another; and the crowd was fully enthralled from the very first one. In a display of very high crowd interaction for a weeknight show, there was chanting, clapping and hopping around for every track. The gents of Kaiser Chiefs also played songs for their latest album Start The Revolution With Me, including popular single “On The Run”. For the duration of one song, the pace shifted from high energy anthems to a slower, more poignant groove. The lights dimmed as a purple hue was cast on the stage and Wilson delivered the words from new track “Starts With Nothing”. With reflective lyrics such as “you start with nothing and you leave with nothing”, the song helps mark the evolution of a band that formed nearly a decade ago. Not every song needs to start a riot – and it was cool to see they can flip that switch off and back on.

The biggest draw, however, to the appeal of seeing this band live is the frontman’s spontaneity. Sure, you could rock Kaiser Chiefs tunes on your iPod any day – but how often will you have the chance to see Wilson mount a giant speaker and remark that the “bass is doing amazing things to [his] testicles”? Right – never. Unless you go their live show, of course. Also, he managed to somehow climb off the stage and over more giant speakers with his microphone and launch himself onto the side bar counter where he chugged a beer that the bartender procured upon his unexpected arrival. Always a jokester, he spoke into his mic with his unmistakable British accent. “Sorry to those of you in the balcony who can’t see me, but I’m fully naked right now – and I’m told it’s a glorious sight!” Hit songs, assaults on mic stands AND laughs? Talk about getting your money’s worth.

Toward the end of the set, Wilson let out an excited yell and shouted, “Chicago! You’re my kind of town!” We feel the same about you, Ricky Wilson. You and your mad talented band mates are always welcome in our city. We might even have some extra mic-stands on hand for you next time.