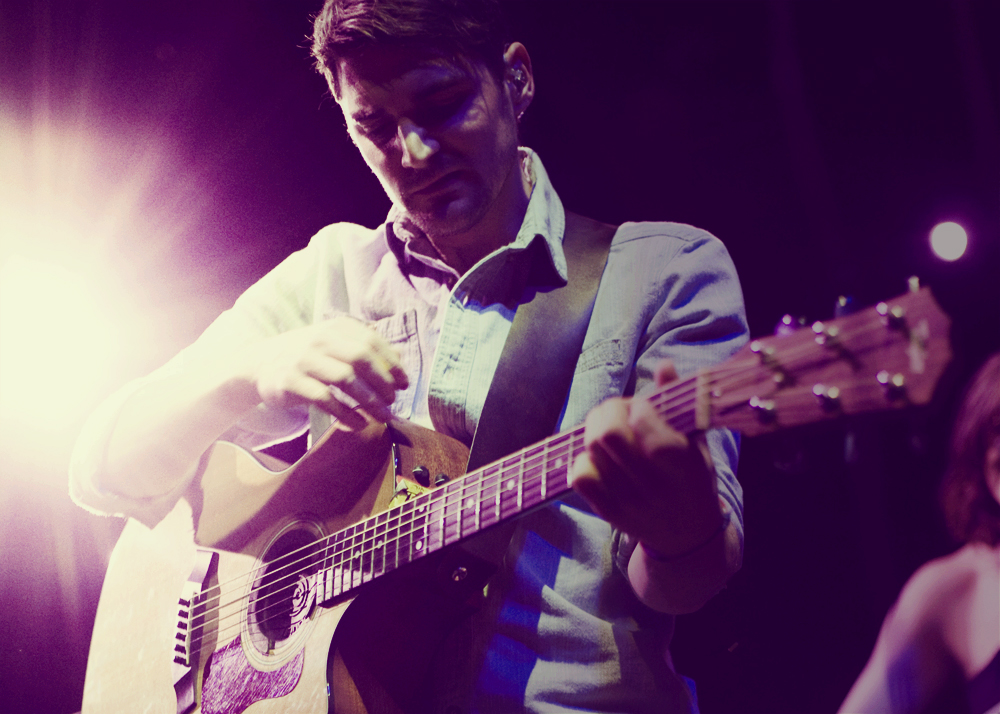 Most of the folks that packed The Vic Theatre on March 9th came out to see Gomez, but considering the multiple Canadian music accolades, the notoriety from their featured song at the 2010 Vancouver Olympics and their upcoming performance at the Juno Awards, it’s a wonder why Hey Rosetta! isn’t headlining a show of their own. The six piece indie ensemble hailing from St. John, New Foundland have been making music together and developing their unique sound since 2005. Tim Baker leads the band on guitar, piano and with deep, meaningful lyrics. He waxes poetic on top of Josh Ward and Adam Hogan on bass, Phil Maloney on drums, Romesh Thavanathan on cello, and Kinley Dowling on violin. Without exception, each song showcased the layered and dynamic talents of every member. Baker, proving to be a bit of an optimistic existentialist, is unafraid to expose a nerve with his writing. He explores heartache, fear, freedom and loneliness, yet still produces a hopeful and buoyant energy on stage. The group began with two upbeat tunes. The second, “Yer Spring,” Baker pointed out, was about the weekend. This garnered an enthusiastic response from the crowd and marked the beginning of what was a fantastic show.

Tim Baker started “Young Glass” almost hesitantly, offering the words at first with caution. Progressing from what felt like an understated and delicate place, there emerged an unassuming but powerful inertia. This building momentum and projection of the lyrics combined with bare strumming of the lead guitar began to reflect what felt like Baker’s palpable desire to get the lyrics out of his mouth and into the audience’s ears. The song continued to swell with prominent strings, mandolin and rhythmic tambourine. We’ve all felt, at one point or another, what Baker admits vulnerably into the mic, “Even though, I thought I was all alone.” He then says, “But I was wrong.” The song is about the feeling of gripping personal isolation and then a subsequent realization that we might not actually be as alone as we sometimes feel. The connectedness and inherent good of humanity is referred to in the last line of the song. Between the gentle cling of the xylophone, Baker’s handsome face, big brown eyes and responsible haircut, I really do believe him when he says, “Even if you’re scared stiff, you can trust in this.”

The homophonic franco/anglo titled “Nous Sommes (New Sum)” also speaks to these themes. This song had a playful and funky beat punctuated by acrobatic and cadenced piano riffs and plucks on the cello. The dual language and double meaning of the title drives home the band’s message, that we are all connected to each other. We have, in French, “nous sommes” literally translating to “we are” and the English “new sum.” Listening to Baker’s words throughout the show, (and later, watching the animated music video at home) I gather that he means to say that, collectively, we all exist similarly and fortify each other by our very being. This dude is deep!

The Hey Rosetta! performance at The Vic was an absolutely fabulous musical experience. Maloney, on drums, owned each song. It is evident that Josh Ward LOVES playing bass. It was a delight to watch him have a ball on stage. Thavanathan switched out instruments more times than I could count and shredded on every one of them. He is a versatile and gifted musician. I dug his beard and glasses, too. Hogan, on bass, provided the band with a stable, head-nodding consistency. If I haven’t made it obvious already, I have a giant crush on Tim Baker. I haven’t enjoyed listening to someone’s songwriting this much in a long time. The only criticism I have would be about the violinist. Lovely as Kinley Dowling is, she looked utterly bored throughout the entire show. Maybe she was just trying (and succeeded) to look composed, but she came off as extraordinarily uninterested. As the only female on the stage, the eyes of the audience are automatically drawn to her. I would have loved to have been as excited by her presence as much as I was by her music. Overall, Hey Rosetta! struck a perfect balance of rocking out to technically awesome music and clearly expressing the tender message of their songs.

Sia at The Vic Theater