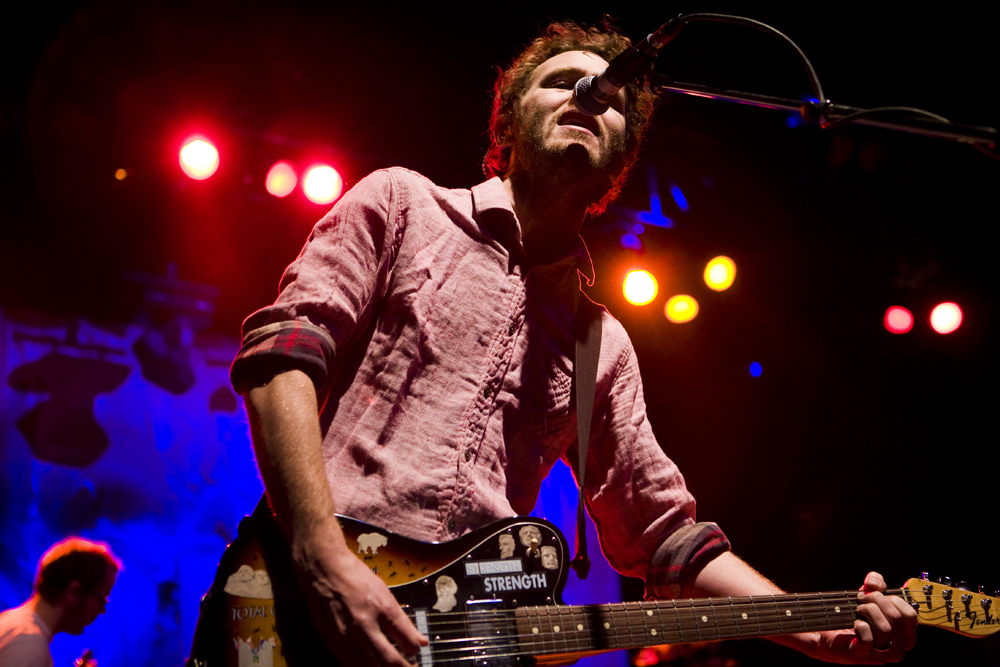 Anyone who has seen the suspenseful Season 2 finale of Grey’s Anatomy (while in its heyday) is familiar with the soft throaty growl of Ben Ottewell, one of Gomez’s three lead singers. “How We Operate” was featured in an edge of your seat scene, complete with blaring heart rate monitors, intense glances between earnest surgeons, and 20 C.C.s of eppy or some such thing. What I didn’t realize before their sold out show at the Vic was just how long Gomez has been around and the extent of their loyal following. The year of the band’s inception, 1997, explains the demographic of the audience that turned out in impressive numbers for what was a truly enthusiastic sing along. This was the Tower Records crowd, only all grown up. The more mature crowd, warm from the feel good performance by openers, Hey Rosetta!, buzzed as they awaited Gomez to take the stage. During this time, each clique within the audience seemed to take special care in finding their spot on the theater’s main floor. Posted up against the front railing, I made friends with a father/daughter duo who had traveled from central Indiana to be there. The father, a longtime disciple of the band, shared his avid endorsement of the group. Not the only one to vocalize his admiration, I overheard several other fans boast proudly of their devoted longevity. The excitement was further stoked when 93XRT’s Lin Brehmer came out to greet the audience, fittingly attired in mom jeans and gym shoes. He posed a question to the audience, roaring into the mic: “Are you ready to feel alive?!” With parking paid for, beer in hand, and a sitter at home with the kids, this particular audience’s answer was decidedly, yes.

Gomez kept their sound fresh and varied with the swapping of lead singers. Ben Ottewell’s physical presence echoed his vocal styling, both large and formidable, but in a gentle giant kind of way. His solid frame and deep, raspy voice contrasted nicely with Tom Gray’s more nimble physicality and lighter sound. Resembling a young James Spader in trendy black-framed specs, Gray hopped from his place in front of the microphone, swung his guitar easily to its stand and led the band from the piano every few songs. Perched behind his drum kit, an animated Olly Peacock kept a grin on his face for most of the evening. Paul Blackburn and his bass energetically rounded out the group. Each member of the band, at some point, initiated a clapping rhythm for the audience to mimic. The Gomez fans obliged happily every time.

They kicked off the night with “Devil Will Ride,” eliciting hoots and hollers from the balcony. “Bring Your Lovin’ Right Here” was a welcome vehicle for Ottenwell’s signature sound and got the crowd moving. Soulful and mysterious, “Meet Me In The City” mixed jam and gospel. This one felt a little naughty, dangerous even. I was surprised and impressed by the eclectic blend of styles represented in just a few songs when Gomez served up yet another curve ball with “California.” Synthesized claps and an Americana fiddle produced a wholesome country sound.

Several songs into their set, Gray announced that they would choose five more tunes to play, and then leave the last ten up to the audience. Aiming to please and engage, Gomez had asked ticket holders to submit online ballots for songs they’d like played during the show. They played the ten most voted for songs in reverse order, finishing with the song folks wanted to hear most. Gomez hit the mark that night at the Vic. They made good on Lin Brehmer’s implied promise from the beginning of the night; Gomez indeed made their audience “feel alive.” Clearly, giving fans what they want is a priority for Gomez, and what’s better is that they couldn’t seem more excited to do it. It is easy to see why Gomez has such a sizable and dedicated following.