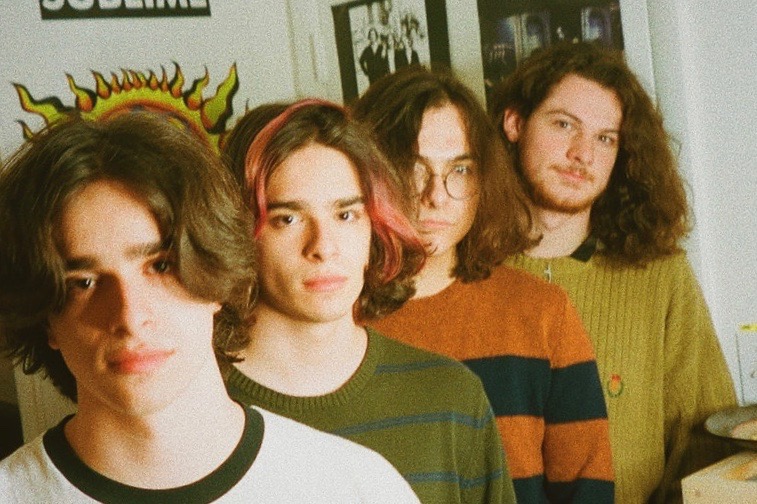 Lost In Concert was able to chat via Zoom with the four-piece indie band on the rise from Charlotte, North Carolina that is WOAH, made up of Ruben Gomez (singer-songwriter, drums), Mikey Gomez (singer-songwriter, rhythm guitar), Jackson Martin (lead guitar), and Zac Tice (bass). They generously shared in depth words with us about how WOAH came together, how they found their signature sound out of the pandemic, and how their determination and lessons learned from the past two years have come to fruition that’s shown through the newest release of their second EP sitting in an open room. In the spirit of the New Year, we also talked about their goals for the new year; one of ours, and yours too, should definitely be to see WOAH live!

Lost In Concert: How did you guys come together as a band and start putting out music together as WOAH?

Mikey Gomez: So me, Ruben, and Zac all grew up together, we’ve known each other since we were five years old. We’ve always liked playing around with instruments and stuff. Originally WOAH was a 3-piece band and then we met Jackson at a photoshoot. Jackson was a fan of the band and we asked him to join. We started putting music out in 2020 online. TikTok has exploded for us. We’ve been building this really cool online presence and it’s just been a lot of fun.

LIC: Did you guys have any musical influences coming from your household or the town you grew up in? Did anything specifically draw, at least the three of you initially, to wanting to be in a band together?

Zac Tice: It’s really based on seeing our musical idols, it looked like a really fun thing to do and pursue. The more we listened to different kinds of music, the more our sound grew from that. We started playing completely different music.

Jackson Martin: When I first met Mike, Ruben, and Zac, they had an EP out on Soundcloud and it was kind of garage-rock and very Strokes-oriented.There was a house show scene that was originating in South Charlotte that more and more people gravitated towards. I had met them there and when the pandemic hit, I think everyone looked a little bit more inward. Michael and I started talking on Instagram and we both liked a lot of the same bands. With the first song we released that summer in 2020 (The Drive Back), the original is now packaged under (our first EP) Better Left Unsaid, it definitely took a more stripped back approach like reverb on the snare or more reverb on the guitars and less treble. Definitely bringing in inspiration like Bono from U2, Julian Casablancas from The Strokes, Michael and I both really like Ben Gibbard from Death Cab for Cutie. It was that summer of 2020 where our sound that is the WOAH sound (was established) and all four of us became the definitive roster of WOAH and we released (our song) The Drive Back.

Mikey: It was kind of the catalyst, that song kind of spun our new sound. I’ve heard people describe our sound as very nostalgic, dreamy, cinematic, that all started in the pandemic when we switched to more reverb and synths.

LIC: Yeah! You guys were mentioning some artists that helped influence that sound, do you have any dream collaborations?

MG: Death Cab for Cutie, to open for them would be cool, or Hippo Campus!

ZT: I think it would be cool to do a song with Gus Dapperton.

Ruben Gomez: That would be crazy.

JM: It would be really cool to pair Mikey’s voice with Phoebe Bridgers or a woman singer. That would be interesting, to get someone within our genre and (pair) the low and high voices.

RG: Beach House and Hippo Campus would be cool to open up for.

LIC: Congratulations on the release of your second EP sitting in an open room! Do you have any specific moments from making the EP that you’re really proud of, like lyrics or production moments on the tracks?

MG: I think we’re all proud of the whole thing and the whole process. It was a lot more collaborative than some of our past work. It was nice having all four of us in the studio and all of us adding our own spin on the songs. That was my favorite part, hearing everyone’s input and everyone’s different parts.

JM: bad luck and i don’t want to die when i’m with you have a lot of influence from all four of our backgrounds that have bled into it. It’s one of those things where, when people ask “what instruments do you play?”, (our answer) is really mostly live roles because of the amount of keyboard parts that Zac has put in or really intricate guitar parts that Ruben has put in or Mike has been picking up little drum sounds… It’s not a streamlined process but we’re a very detail oriented band and we’ll spend a lot of time obsessing over certain sounds and tones that create what we’re going for. There were a lot of moments where we wrote this EP all living in the same house together, so we’d come out to our living room that’s a studio and we’d pick up and work on it. It was hard. In your last cigarette, I remember there was a moment where I recorded a guitar part and Ruben was in the kitchen and was like “woah!” There’s something nice about when you try and try and try, then something sticks and people are in the house and (we decide) “that’s cool, let’s run with that”. And in i don’t want to die when i’m with you, if we’re talking about lyrics, that title came from when we were sending a list of demos out to Netflix. We don’t name the songs until they’re done and I just heard Mike say something like (i don’t want to die when i’m with you) in the chorus…

MG: I still don’t even know what that means!

JM: …but it was a cool thing to run with.

MG: I like that in general, when you have a lyric that doesn’t really make much sense but you want to hear how other people interpret it and apply it to their own lives.

LIC: What made you choose i don’t want to die when i’m with you and all my friends keep saying i’m dead as singles and the opening and closing tracks for the EP?

RG: At the time while recording them, as a unit we thought those songs were the best as far as melody and intricacies of who’s playing what. We all gravitated towards those songs and I think we all felt something when we listened to them, so it was just a pretty obvious choice to pick those two.

MG: I think they were the most cinematic and whenever I would listen to them, I felt like I could see a storyline or maybe it takes me somewhere. We picked those two as the singles and we also have music videos coming out for them too which will be really cool.

JM: The second single was supposed to be bad luck, we had the cover art for it and everything and it was ready to go, and then Ruben brought all my friends keep saying i’m dead to the band and we listened to it. It was so ethereal and it was a cool moment for us where it felt like this is what we’ve been getting at. Then Mike recorded the guitar part for that fuzzy, ambient outro and we were like ‘what other way is there to end this thing?’ That was a good climax and way out. The mirror reflection of opening and closing with death is more coincidental. We very much prioritize feelings. The sequencing of our EPs has never really been a question and there was never a question about if all my friends keep saying i’m dead was the closer because it’s such a finale.

LIC: Your first EP release was about two years ago, how do you feel that the band has changed or your goals have changed since then?

ZT: We’ve grown into using more things in our songs than we normally do. For a while we stuck to the same kind of instrument sounds and now we’ve come out to make something cool and different.

MG: Our songwriting is developing and getting stronger. We’re improving and growing and learning because, I mean, we’re still fairly new at this, we’ve only been doing this for two years. From the first EP to now there’s been a lot of growth in our songwriting and our live performances.

JM: In between EPs as well we released three singles. Coming out of (our first EP) Better Left Unsaid, we were experimenting with upping the production quality and the instrumentation and just doing new things. I love those songs but after working on them for a while we felt like “Oh well this isn’t necessarily what we started with”. We wanted to look back on what we loved about the band and elaborate from there rather than our expected trajectory. That’s something that I appreciate about (our second EP) sitting in an open room is that we stepped back into what we were doing, back to either the reverb-y vocals or we joked as a band that “we need to wear sweaters again”. We did more of what we wanted to do with this EP and we didn’t have as many outside expectations, we just made the art we wanted to create.

RG: We’d like to go on at least a couple tours this year to build a live fan base because we are pretty big online but we haven’t really captured that live feeling with an organic audience. And just to put out a lot more music.

JM: One resolution already was that we got on a Spotify editorial playlist and we’re on ‘All New Indie’ right now! That would be one thing I would’ve said but it happened immediately

MG: That was really exciting! What Ruben said, to tour and keep making more music and just keep growing.

JM: And do things our way. That was something we learned a lot in 2022 that we’re looking upon 2023 with: let’s not necessarily listen to the music industry as much as we have to and let’s do what we want to do because that’s how we got to the spot that we’re in in the first place. No one knows WOAH as well as the four of us do. We know what we’re good at and we know what we should be doing, so trusting ourselves.

RG: 2022 was a lot of taking bad advice from people that shouldn’t be giving advice in the first place.

I think that makes the music what it is because it's the amount of time and homeliness that we can give to it.

annotations of the events in my own life