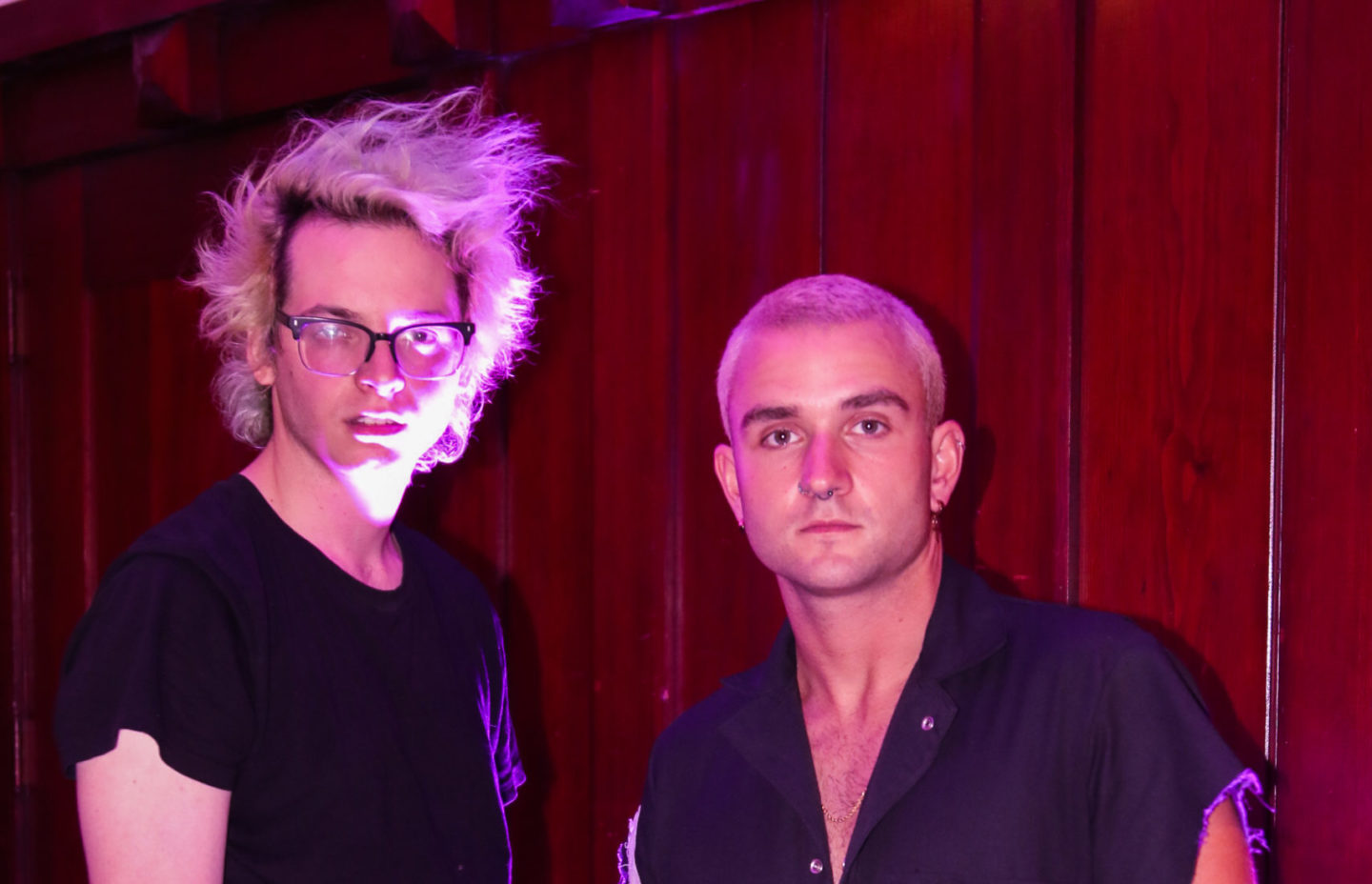 I was able to sit down after the show with 2/4 of The Wrecks, lead singer Nick Anderson and guitarist Nick “Schmizz” Schmidt, to talk to them about how exciting it is to release their album during the start of their summer tour and witness these live reactions every night. They told me about their appreciative and dynamic relationship with their fanbase, with each other as bandmates, how these close connections improve their music production and live performance, and what their sophomore album title Sonder means to them.

Lost In Concert: “So your sophomore album came out two nights ago! How has it been with the album release happening the first few nights of tour?”

Nick “Schmizz” Schmidt:  “Honestly, crazier than ever. Everyone knew the words by the second night of the tour (last night, June 10th!) I mean, they couldn’t possibly know the words the first night because the album hadn’t come out yet,”

Nick Anderson:  “Yeah, [last night] half of the front row was definitely listening with headphones in during the openers. I was shocked.”

LIC:  “Have you had any fan reactions live to certain songs on this new album that you thought would be different or surprised you?”

NS:  “Sonder they love, maybe it’s just because it’s the title [of the album]. That one actually took us a minute as a band to feel comfortable playing [since we were] trying to keep up with the quality sound of the record. We were having trouble with that [in the studio] but it’s hitting hard.”

NA:  “The more the fans sing along, the more the fans are into it and the more it makes sense to us while we’re playing it. When we play a song for the first time live, we direct our guitar parts and our dynamics as a band based on how the crowd reacts. So if we were like ‘oh, this bridge needs to build up’, we’ll do it because the crowd clearly needs to be built up to it. We can feel the crowd. Our crowd has always been dynamic and responsive and so engaged; we have a really good fanbase for making our setlists better. They’ve always made our song arrangements better because they react in a natural way with us. They feel the band and they feel the growth of the songs so it’s really helpful to play the new songs in front of small crowds that are intense crowds who are getting what we’re doing.”

LIC: “Could you guys tell me more about the theme of the album and what sonder means to you?”

NA: “Sonder’s a word that I thought I always knew but apparently I only learned it in 2012 in my sophomore year of high school. It means that everyone that you see in the world has a complex and vast amount of emotions and a spectrum of feelings and a complex life that they live, the same as yours. That’s the main part of it. Like, hey, just because someone’s spawn point is the United States of America doesn’t mean that they deserve any more than someone whose spawn point was a third world country. That’s what it means to me. Just because someone’s literal spawn point was elsewhere in the world, doesn’t mean that they aren’t you. They are you, they just spawned elsewhere. Video game people would get that. Everyone should have a lot of universal basic things, like when it comes to income and healthcare. Even with emotions, I think it’s really important that when you think someone is a good person or a bad person, everyone has a unique amount of common sense emotions that they developed from their growth and their upbringing into how they are. It’s really important to be cognizant of that and be aware of that and use that as an indicator of how you treat other people. Like, when someone cuts you off in traffic, you might go ‘Fuck that asshole!’, but it’s that moment where it’s like ‘oh, that’s someone who’s pregnant in that car’. That’s the most simplistic version of it, but always take into consideration someone else’s moment because they are as complex as you are.”

NS: “Even the people closest to you that you don’t quite understand. That’s what I realized in my life, too, that usually it just comes out of the people that hurt me the most. I’ve tried to not forgive people in the past but I end up forgiving them because I’m like hey, they have their own complex combination of events that they’ve been through in their life. Whether that’s made them make good decisions and brought them to a good place or they’ve made bad decisions that have brought them to a bad place, not that I necessarily respect certain decisions, but I love them anyways because they’re their own person. Everyone faces obstacles and makes mistakes and hurts people and, really, everyone should just be patient with each other and love unconditionally.”

LIC: “How did the process of putting this sophomore album together compare to your debut album? Was there more anxiety or were you much more comfortable with it?”

NA: “It was similar in a way [to the debut album] because they were both made during the pandemic. I think that the second record was important as far as emotional discovery goes. This was a record where I was going through something very personal and, when I go through something personal, I go through it not only emotionally but also musically. I don’t listen to music much. I write music a lot, but it’s very rare for me to have something that’s so inherently real and immediate and ‘right then’ that I need to express. This was a moment where, for the first time in seven years, I was like ‘I need to express this now in my way’ and that was how this record was made, or the majority of it, at least. There are some songs that were started earlier that Schmizz was a massive part of where I was like ‘oh, I need to add lead guitar moments to this’ and there’s a lot of songs where there’s not as many musical moments; it just has the instrumental guitar chords, lyrics, and the emotion. That’s [on one hand] because I’m not super talented with playing any instruments but rather just emoting with them. There are a lot of songs where I just needed to get out what I needed to get out and I’m blessed enough to have a band who allows me to have that time to get some shit out that I needed to get out. There were no toes being stepped on. They all just recognized that I was going through something massive and they trusted my songwriting, they trusted my production, and they trusted that I’ll get us there. Maybe next record we’ll all have something else to emote and something else to express, but for this record specifically, that shows the lack of ego in the band where, when someone needs to say something, everyone else steps back and goes ‘Okay, say it’. I feel really grateful to just be able to express myself through 85% of this record and just make the thing that felt honest.”

NS: “Everything just came out perfect and real and genuine. All the first songs [that I heard], I was like ‘I love this part’ and I didn’t even have anything to do with them. I was just like ‘holy fuck!’”

NA: “I think that’s really rare in a band. The Wrecks as a band, individually, are so incredible. To have members that are so good at instruments to be able to be like ‘I don’t even need to have a touch on this record but I’ll play it live and I’ll connect with this’, I just don’t think that’s common. Unless you’re a band where the lead singer is the only person who’s actually a member of the business and the rest are live hires, that just doesn’t happen. Everyone’s in this band for the right reasons. We’re here to play music and express things in the most honest way that those pieces of art should be expressed. I just feel so grateful to have members that feel it with me. I just couldn’t be luckier.”

NS: “Especially as a young band, Billy and I joined this band when we were 18, fresh out of high school. In those years there’s a lot of shaping to be done and our band kind of came together like a blind date, that’s how I would describe it. I didn’t even know Nick that well; I knew there was this plan for this really cool project. All of us are very different people. We all come from very different backgrounds. We all have very different tastes in music, we definitely have more similar tastes as we’ve grown together, but we come from different things and in the beginning, maybe Nick would be writing something super glittery and pop-py in my eyes and I’d be like ‘What the hell is this? X to this!’ but now Nick understands me and I understand him,”

NA: “At that time, I’m listening to something that I think is emotional and pop-punk and Schmizz is like ‘What is this?’ and he’s playing something that’s super alt-rock and I tell him ‘Yeah, but that sounds like it was made in the 1930s!’ and now? I’m watching Schmizz be fine with listening to songs that I’ve never heard of that I love and that are more so in the genre of what I would’ve loved back then. And I’m finding rock songs that I’m showing Schmizz and he’s going ‘whoa, what, I’ve never heard this!’ We’ve influenced each other so much over the years that now we’re introducing each other to each others’ taste.”

NS: “I’m just starting to have my emo phase now!”

NS: “I’ll have a verse on my phone that’s something that Nick would’ve written seven years ago. The latest things that he writes-”

NA: “- is shit that you would’ve written when we first met!”

NS: “But I outgrew that because I had to adapt to something else and you probably felt the same way!”

NS: “It’s not the ideal situation for starting a band. Most people wouldn’t think like that, like people who knew each other the whole time and grew up together and are always cohesive. But I think that we are who we are because we’ve mixed a bunch of fucking ingredients together that we didn’t even know existed.”

NA: “Even when I’m working on a song on my own, I’m thinking ‘What would Schmizz think of this?’ This was the first record where I had to turn that off, which was really hard, and I’m sure I didn’t turn it all the way off, but part of me had to turn it off. It’s funny because Schmizz was going through the phase that was perfect for this record and I was going through the phase that made it sound more like Schmizz!”