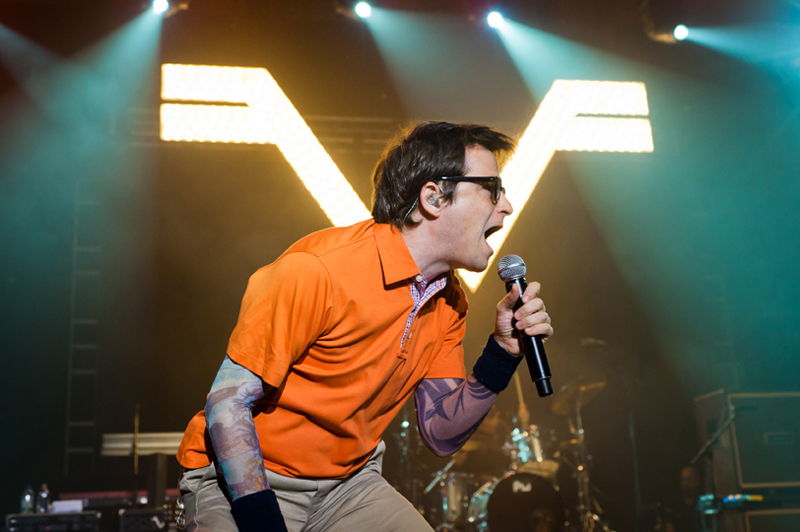 When you scored that deal site ticket to this past Sunday night’s Weezer show at The Congress Theater, you didn’t know that you were buying a ticket to a show that would fill a unique niche in the band’s history. Slated to close out Riot Fest 2011, Weezer drew an eclectic crowd to Chicago—teenagers celebrating the last day of the notorious punk centric festival mixed with those who were tempted by the nostalgia of the Blue Album. Weezer’s performance also brought to town the band’s former bassist, Mikey Welsh, who was rumored to be attending the show.

The surprising and ironic death announcement of Welsh the morning of the show, who is suspected to have overdosed in his hotel room in Chicago on Saturday night, changed the meaning of the show for me. The headlining act of Riot Fest was going to become a show dedicated to a very immediate deceased band mate, which ensured a show with feeling and passion.

The band took the stage affront the iconic Weezer “W” sign, as Rivers Cuomo opened the night by dedicating the first song, “Trouble Maker” to Mikey; then the band played one hell of a tribute show to the former band member.

This was not the show Chicago saw ten months ago at the Aragon where Cuomo jumped on trampolines and scaled the balcony; it didn’t carry the promises that the Blue Album would be paired with a set of group hits. They delivered a sophisticated, honest, energetic rock show that wasn’t tied to fan favorites much outside of the publicly voted play-though of the entire Blue Album. The band admittedly started the rare B-side ‘I Just Threw Out the Love of My Dreams’ in the wrong key and had to restart the song, but followed the stumble with a rock-driven cover of Radiohead’s “Paranoid Android.”

The band carried out another solid front to back performance of the Blue Album, emerging to the stage for the second set kicking off with “My Name is Jonas” and concluding the evening with “Only in Dreams” with all the 90s hit in between. Cuomo changed into his classic blue t-shirt and everyone got to relive the nerdy album they love.