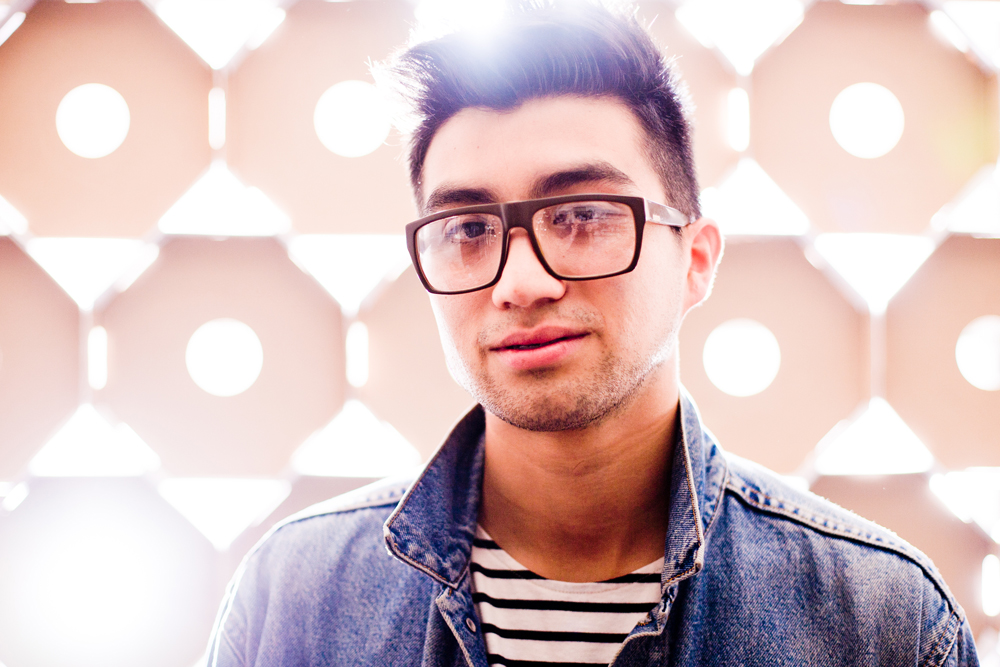 In Chicago, on any given day, there’s roughly a 90% chance that music at the coolest place to be is being provided by Kid Color. Whistler? Check. Smart Bar? Double check (he’s also the assistant music director). North Coast? Later this year. Lollapalooza? Sunday at 12pm on Perry’s Stage. Why does Kyle “Kid Color” Woods keep getting invited to entertain hundreds, if not thousands, of people on a daily basis? Because he knows how to mix better than the portly, mustachioed gentleman in the arm garter mixing your cocktails.

And no, before you ask, we didn’t plan the interview shoot to include the same clothing he’s wearing in that Soundcloud profile picture.

Along with a personal talent pool large enough for Michael Phelps to swim practice laps in, Woods is, quite seriously, one of the nicest human beings I have ever met. It’s almost difficult to imagine a sunshine and rainbows sort of personality not being completely devoured by the music industry, but it’s true in Wood’s case. He doesn’t have a bad thing to say about anyone. Every comment on his immense collection of Soundcloud tracks gets personally responded to. The same goes for tweets, texts, Facebook messages, smoke signals and notes passed to the DJ booth in a crowded Smart Bar. I’m willing to bet money on the fact that, if you were cold, Kyle Woods would give you the shirt off his back. Not because he feels obligated to, just because that’s the type of guy that he is. That type of genuine interest and involvement would seem like a contrived pleasantry coming from anyone else. From Kyle, it’s nothing but genuine. He really just wants to help out.

With that, let’s talk about clothes for a few minutes because, in case you haven’t noticed yet, Kyle is a pretty stylish guy. Don’t get me wrong, all the guys that came through have their own individual style. But Kyle, with absolutely no provocation, showed up on a 100 degree day with a suit and accessories from Tie Bar. Now that’s what I call preparation. In addition to that, he commented on what we were wearing. Anyone that comments on an interviewer’s shoes immediately gets bonus points. But again, it just goes back to his character. He doesn’t care that he’s the artist and you’re the media. We’re all just people creating something together.

All creations are not created equal, though. Woods’ music is a house-y blend of disco and soul that makes you feel like you’re watching Saturday Night Fever, while listening to Arthur Conley, in a thousand person club with a sound system the size of a couple Cadillacs. All music can be considered art on some level, but Woods has a unique style entirely. The music imitates the man creating it. The youthful exuberance (he’s only 24), attention to detail and smooth transitions are all there. It’s devoid of jarring tempo changes and can be enjoyed for hours at a time. It will make you move your ass like you’re on your way cross-country from Orange County to Chicago for Lollapalooza to catch Daft Punk like Woods was in 2007. The most important thing to take out of all of this, though, is the fact that it’s fun.

If you’re listening to him spin at one of the eight places he’ll be at in the next five days (Seriously: Lincoln Square Auditorium / Old Town Social / FOX Good Day Chicago / Lincoln Hall / Lollapalooza / Primary / Rehab), you’re going to have a hard time preventing your feet from moving. The kid that looked up to Derrick Carter and interned for Darkwave Disco, is now supporting acts like the formerly mentioned Mr. Carter, Cut Copy, Holy Ghost!, is returning to Lollapalooza this year for the second time and has some original tunes on the horizon.

Even with all the success, the most startling thing about Woods rise to DJ phenom may be his attitude. It hasn’t changed. Woods remains the same down to Earth guy that will hang out on your porch and shoot the shit for hours at a time over drinks. You owe it to yourself to see him Sunday at 12 on Perry’s Stage. Make sure you wear comfy shoes.