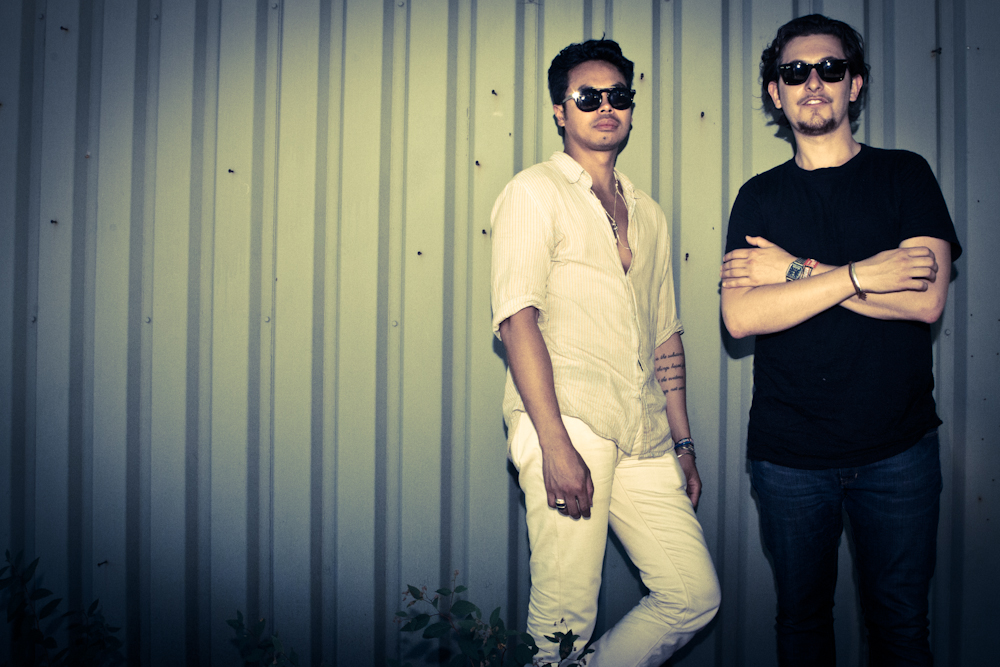 Despite the angry noun in the Australian group’s name, The Temper Trap is really a band that dispenses a make-you-feel-good vibe left and right with catchy tunes and stellar live sets. Singer Dougy Mandagi and lead guitarist Lorenzo Sillitto spent some time with Lost In Concert at Lollapalooza before their next day performance would ultimately be canceled due to the festival’s storm-related evacuation. With the absence of any grey clouds in the sky, the gents were able to reflect on growing as people, progressing as musicians and how Twitter just might impact their touring schedule.

Ironically enough, the conversation began with Sillitto’s confession that he doesn’t enjoy playing big festivals. “You’re just too far away on the stage,” he says. “It’s like rows and rows of things in front of you. I mean, it’s still fun. It depends on what kind of stage you play, I guess. Last time we played Lollapalooza [in 2010], we played on a side stage in the corner surrounded by trees. It felt like you had your own festival in there, so that was cool. But when you play the big stages, it feels more disconnected.”

Playing bigger stages, however, is just one of the things that comes with the territory as a band gains momentum and popularity. While it may not be the most fun to be awarded the main stage upgrade card for festivals, there are definitely occasions when it’s quite welcome. The Sydney Opera House, for example. “We played some shows earlier on in the year in Australia to coincide with the release of the album and we did two Sydney Opera House shows. That was pretty amazing,” shares Sillitto. “It’s one of those things that you know, you start playing in a band and you think about different levels… and you start at [smaller venues] and then you work your way up and think about how it would be great to play the Opera House one day. And then we had the opportunity to do two nights there. So it’s crazy,” he concludes with a smile.

Mandagi chimed in to comment on how much has changed since the band first formed back in 2005. “Seven years ago I was like what – twenty-something – and now I’m 32. We’re almost different people now. We’re all grown up.” Hand-in-hand with growth as people, has come the progression of their music. The band released their self-titled sophomore album this past June. Mandagi expressed his point-of-view on how the new record differs from Conditions. “I think musically, the new record is less guitar-driven, but it’s also a lot more personal lyrically. It’s a lot more revealing, I guess. There are songs that are like a little window into my personal life, which didn’t happen as much on the last record. The last record had a number of ambiguous songs where people could basically make up their own meaning to what the song was for them. This record has more specific and literal experiences for me,” he shares.

No doubt, it’s the sincerity of those personal experiences that will continue to draw fans closer to the band. Music lovers will welcome every opportunity to feel connected to artists – and there are three accessible ways that allow them to do that; listen to their records on repeat, attend live shows and engage on social media. As such, the band recognizes that just one tweet or re-tweet can crystallize a fan’s support. “We started doing these thing about once as month called Twitter Chat,” says Sillitto. “We’ll get online for about an hour and some of us will just answer questions directly with our followers. That’s been really positive in just connecting with our fans.”

While an excited fan getting a tweet isn’t very surprising, the band is also noticing how the social media platform may be informing where they should next go on tour. “We have a huge fan base in Southeast Asia; the Philippines, Indonesia, Malaysia,” says Sillitto.  “And they’re really kind of forging the way for us to do an extensive tour in that part of the world. It’s exciting to connect with people that would otherwise be missed if we didn’t have social media.” When you consider that insight, social media is kind of the digital equivalent of sending messages in bottles over the waves of the sea. Notes of adoration and requests for a visit are just washing up on the shores of Twitter in 140 characters or less.

Lost In Concert’s message to the band: @thetempertrap Thx for the interview. Sorry ur Lolla set was cancelled. Pls come back  & play somewhere indoors for us.:)#ChicagoLovesYou