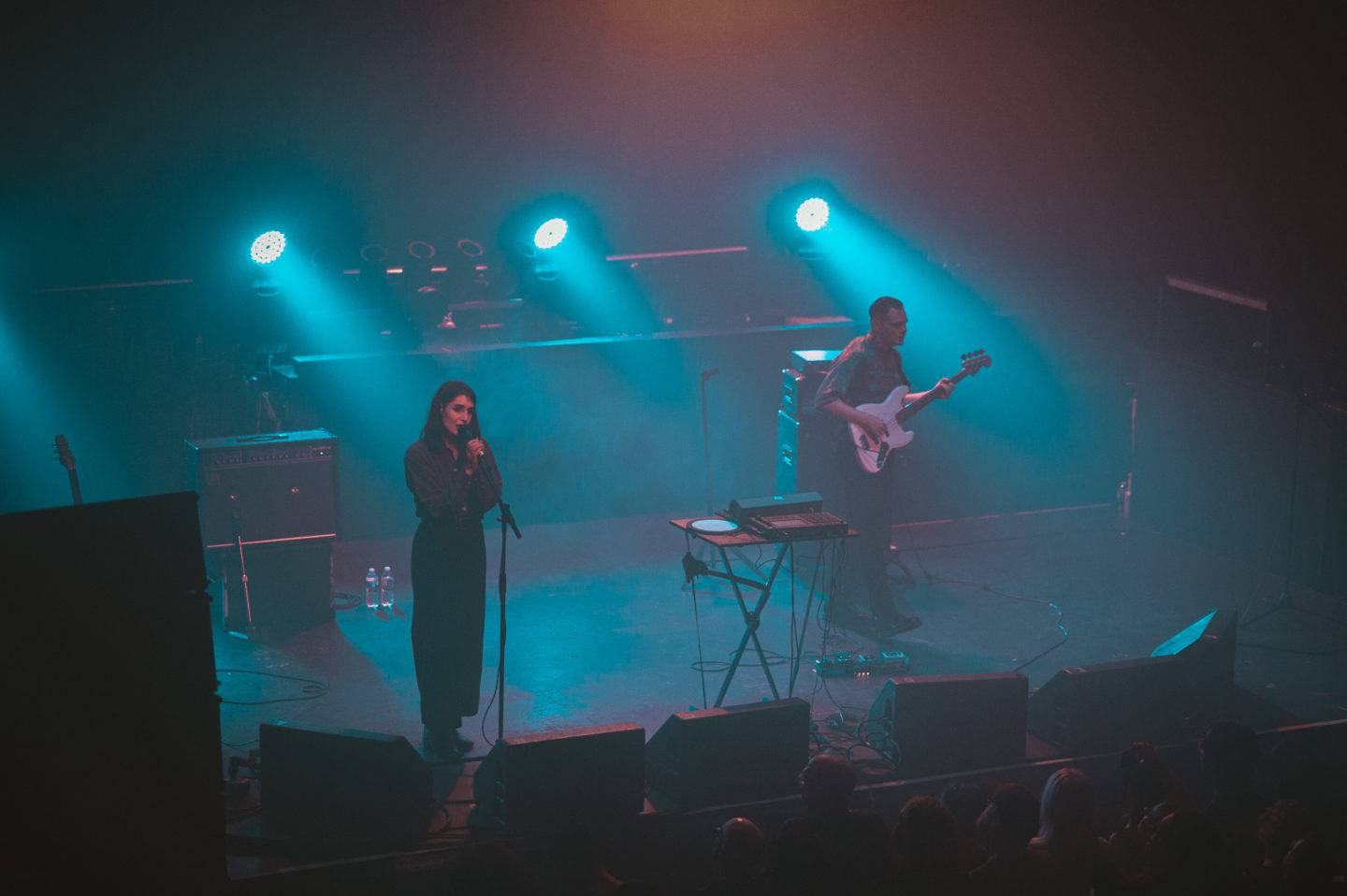 At first glance, not all music seems to be working as a live performance. For me personally, the gloomy haunting melodies of Lebanon Hanover have always been a perfect soundtrack for lonely walks on the beach in winter or solo urban adventures. Never have I associated the art of Larissa and William with crowded venues, even venues as alternative as Vancouver’s Rickshaw Theatre. However, I was proven wrong: Lebanon Hanover is absolutely delightful and mesmerizing live.

Rarely the atmosphere at a concert resembles the one of a goth party, yet here it felt very similar. People got together to enjoy and dance to the dark, beautiful music. To live in the moment, with phones put away. And while some underground shows seem to be attended by a more or less diverse audience,  the same could not be said about this concert. Despite their cult following within the underground scene all over the world, Lebanon Hanover is a stranger to the mainstream audience, this is why the gig was for the most part attended by the “darker” alternative folks and post-punk lovers. At an event like this, it is always safe to express yourself and be true to who you really are. Loud post-punk music was playing before the show to create the atmosphere, the familiar dance anthems played at the goth parties that I frequent.

The concert had been rescheduled from February 8th, 2022 when the latest to-date wave of COVID had hit British Columbia. The band came back as soon as they could, and on June 28th they performed in a packed, sweaty, and dark Rickshaw. The “local flavor” was added by the Vancouver-based post-punk band Spine Wire, who started their set very suddenly. The musicians played most of their only album ‘Bury Me Here’ during a rather long and dark set accompanied by flashing lights, haunting vocals and ecstatic dancing of Jesi and Robert. The audience was rather quiet in the beginning, yet they got warmed up quickly and by the end of the set everyone was dancing when the Spine Wire set ended as abruptly as it started.

Shortly after 9, the venue went dark and the demonic noises from the speakers signified that the dark heroes have arrived. Larissa in red, mysterious and beautiful, was joined by her collaborator William grooving to his bass.

In a way, both bands have shown how much can be done with just two people, using technology, passion, and immense talent. With samples and pre-recorded elements, Wire Spine and Lebanon Hanover create two different soundscapes that could be a work of a full five-piece band. Wire Span with the sound more aggressive and punchy, with noisy elements of industrial and darkwave music. Lebanon Hanover for the most part creates gloomy and dreamy melodies and minimal, dark sound, expressed through the melancholic music and the voices of both Larissa and William. The recognizable hypnotic atmosphere of their records translates perfectly into the live performance. Yet what can not be picked up through the audio version only is Larissa’s and William’s behavior on stage which is for the most part polar opposite. This makes their performance even more charming and appealing: while Larissa keeps the ice-cold demeanor, contributing her soft and dreamy vocals, William’s performance is energetic as he bursts into dancing while showing how much he feels and cares about the music he creates

Lebanon Hanover is a perfect reminder that sadness is natural, beautiful, and best experienced through music <3

Darkness with a twist: ACTORS’ epic comeback to Rickshaw Theatre

Ready to dance and rock.