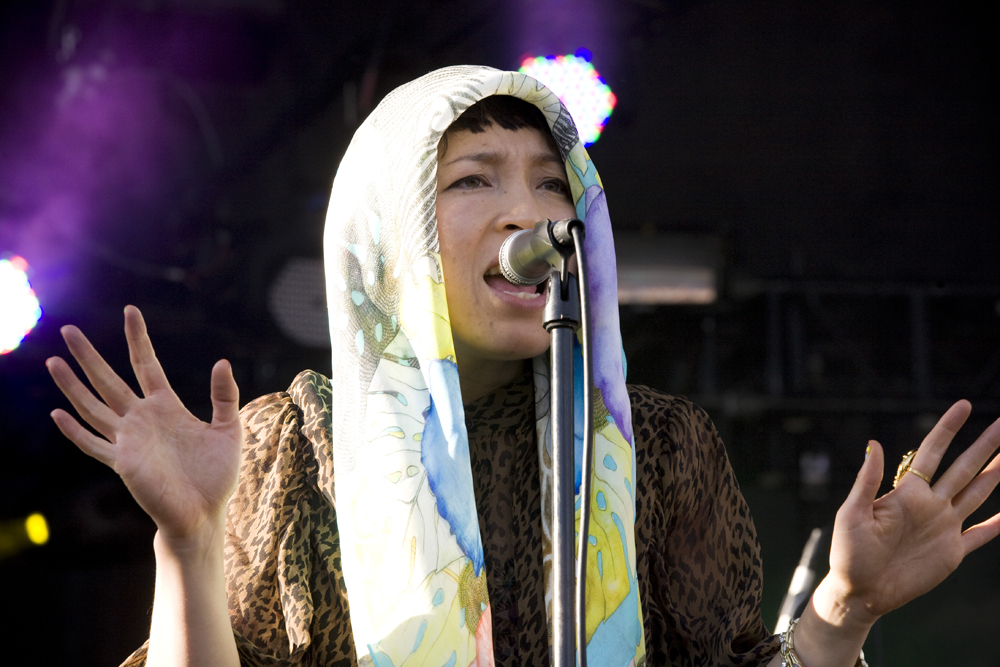 Walking towards the (Named After) Groupon stage at around 5:15 on Sunday, it occurred to me that the only Little Dragon song I was familiar with was “Twice.” So I Wikipedia’d the band. Swedish electronic band. Ok, I’m all for that. The frontman walks out and it’s actually a woman. I can definitely get behind that. Synthesizers are on stage. Supports the whole “electronic” thing and I’m cool with that. Then some friends find me and tell me they’re super excited to see Little Dragon because they’re a huge buzz band right now. These are the type of people that have time to read sites like Pitchfork regularly, so I just take their word for it.

I don’t get it. Little Dragon is pure indie music. Some contrived combination of soul/psych/jam/drums where electronic is really nothing more than an afterthought and a colorful percussion pad for the lead singer to play with when she’s not busy “dancing” in place camouflaged by a scarf. Speaking of dancing, someone said something about a dance party while I was in earshot. I don’t know who, in their right mind, would play Little Dragon at a party, but they’re probably hipsters. Standing in place pretending to look cool does not constitute dancing, and that’s pretty much what was happening the entire time. But it’s not for lack of trying.

Little Dragon wasn’t nails on a chalkboard, perforate your own eardrums bad, but it wasn’t what I would call good either. Each song is like starting an epic road trip in a vintage ride you feel like you’ve ridden in before and then crashing into a ditch five minutes later. At that point, it’s just a lot of wheel spinning until the tow truck of muted audience approval arrives and then it’s on to the next song. Obviously there are notable parts, but then the entire band slips into this sort of repetitious pattern for each of the songs that kills whatever intimate moment almost happened. It would have been the perfect music to take a nap to, but by this point in time the grounds were destroyed and there were stoic, erect hipsters everywhere. Oh well.