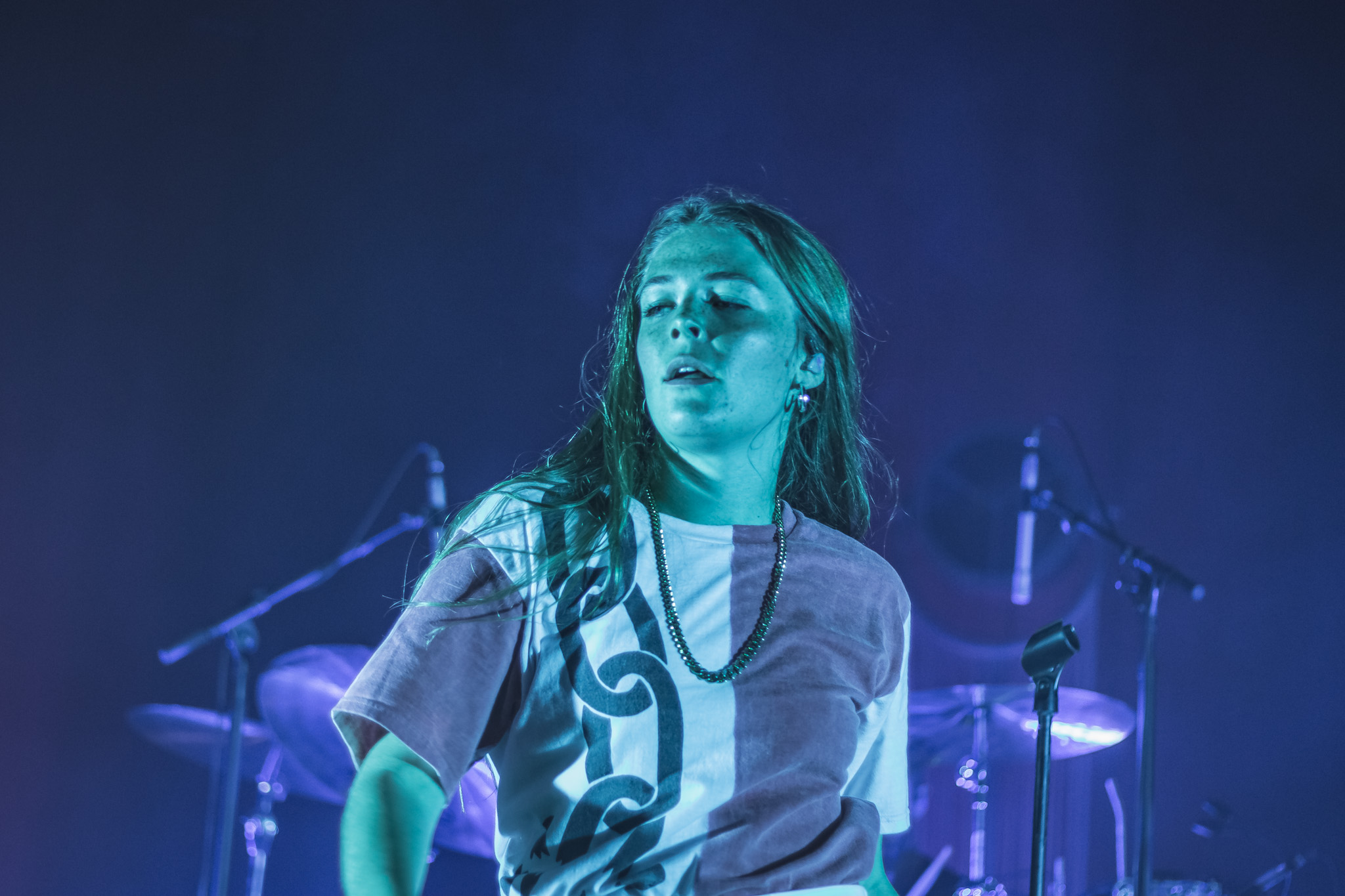 Maggie Rogers is on some kind of trajectory. The fans that packed Chicago’s Riviera Theatre seemed to know it. Surely, they’ve seen the viral video with her and Pharrell Williams (specifically, watch from 2:45 to 3:15, and you might literally see that moment where a star is born). They also might have been on to the fact that this could quite possibly be the last time so see her up close and personal in a venue this small.

When the house lights went down, the crowd roared. What was amazing was the buzz that continued as the band installed themselves in practical darkness. In the 10 seconds that open Give A Little, Ms Rogers took to the stage looking like a bona fide star. When she opened her mouth…I don’t know how else to say this…the place literally lost it’s shit. By the time the chorus kicked in after only about a minute, the concertgoers flipped their lids and hands were in the air. You expect this when a mega star hits the stage. Again, it was amazing to see that type of reaction in the smaller venue.

After first song welcomes concluded, the real hugs and gushing began. The crowd was crushing on Maggie so hard that she seemed entirely shocked. Check out the 3rd photo down below. She stepped forward and back from the mic, almost looking not sure what to do. But, there were such real human moments in there. She looked around at her band, as if to say, pinch me. They looked back at her. We all pinched ourselves. She continued to back it up, to convince us it wasn’t a dream. Song after song, she commanded the stage with a confidence years beyond her age.

Midway through the set came a longer address to the audience. It was a very nice connection moment. “Two years ago, we were playing for 250 people and now we’re playing for 2,500” she says, when describing the sold out show that was, in fact, moved from the 1k capacity Vic Theatre to the 2.5k capacity Riviera Theatre. It almost seemed funny in hindsight, this statement, as she proceeded to describe that next up, they were off to New York. So, we’re talking Saturday Night Live here. If I’m not mistaken, a handful of original tour dates have been pushed back months to make way for this opportunity. Maggie Rogers will join Jonah Hill as featured musical guest. So yah. That’s why the comment about 2,500 people seems funny. I think we’re seeing the curve go vertical here, in my humble opinion. This is what it looks like when someone is about to go supernova.

Also of note was the very personal description of her track Back In My Body, which also came along with a bit of political motivation for the young crowd. Paraphrasing here, she described how people in government should make you feel safe, and make you feel safe in your own body. The crowd seemed to understand what was at hand and the gravity of the political situation. A call to please, please vote was surely in order.

Of all the great collective and singular moments that could be described here, one stood out as truly exceptional. For the encore, the band returned to the stage to the standard wailing of encouragement to play on. Like a master MC, Maggie proceeded to calmly quiet the crowd, asking for silence. If you’re gonna cough, do it now. The room slowly complies. The room falls silent as she begins Color Song a capella style. Suddenly, she pulls the ace move of moves by lowering the mic down to her side and singing unamplified in front of the packed theatre. One doesn’t see this too often, I’m sure of it. But her voice filled and lifted the room in the most organic way. It seemed natural, this moment, as if it was a mirror back to the start and her simple rural Maryland roots.

The band is currently touring a record, Heard It In A Past Life, that’s scheduled to be released in January 2019 on Capitol Records.

Setlist:
Give A Little
Split Stones
Burning
Better
Say It
Overnight
Dog Years
The Knife
Retrograde
Light On
On + Off
Back In My Body
Fallingwater

Check out the song, Alaska, which seemed to have started the ascent: