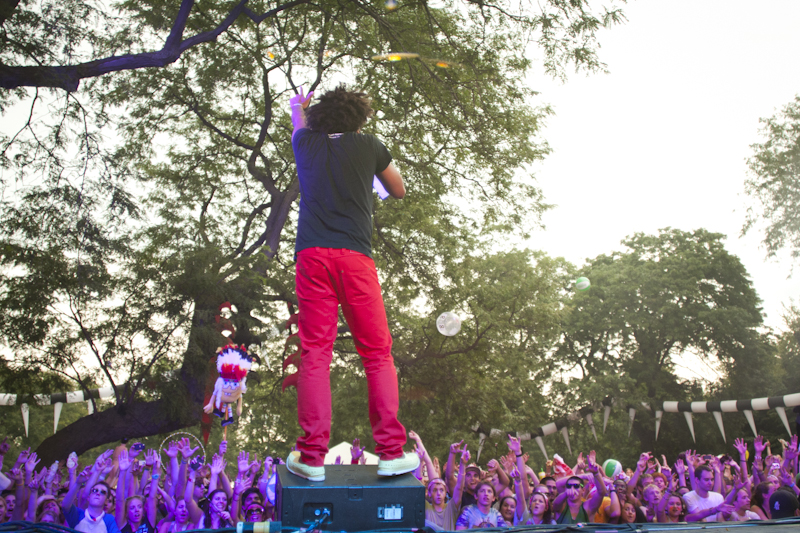 A friend of mine text me at 5:45pm and said, “I don’t think I’m going to make the show.” I simply reply, “If you don’t come to this, I’m going to KILL YOU.” (or Major Lazer will kill you.) The incredibly versatile DJ/producer from Philly, Diplo, and his Major Lazer crew took the stage and had the crowd bopping around to his club bangers and dance hall tracks for sixty minutes. For those who have seen Major Lazer before, there were a few things left out of this show: ballerinas, paper mache dragons and an Ace of Base cut. I know… bummer. However, those gems (as strange as they seem) were replaced with these: umbrellas all over the crowd, beach balls EVERYWHERE, owls on sticks and more hot Pink Booty Dancing.

Diplo took the stage in his normal fashion, sporting a skinny tie, sport coat and waving a towel in the air like he was from Pittsburgh. Seconds later, our ears were pierced with the sound of lasers firing off between deep and heavy beats. Diplo was then joined by the rest of the current Major Lazer crew. My favorite – and possibly the most popular hype man since Flavor Flav – Skerrit Bwoy, was not present and Switch was nowhere in sight. Bwoy was replaced by a Jamaican dude who looked like a skinny version of Reggie Watts. He wasn’t as lively as Bwoy, but the booty dancer who was sporting hot pink and humping everything in site was plenty of entertainment. But once again, this performance was really all about Diplo.

Diplo’s set came at just the right time. The sun was starting to do go down, the rain had subsided and the concert goers were looking for a shot of adrenaline. Just after the opener (Travie McCoy’s remix of “Billionaire” faded right into Major Lazer/Party Squad mix of “Pull Up”), people were climbing the trees and dumping beers on their heads. It was that kind of show. Fist pumping, heads bobbing up and down… and plenty of “MAAAA-JAA! – LAAAAA-ZAA!” chants. The mixes were quick and concise. One moment he would play a Kascade remix, and the next would be a quick transition into Skrillex. People were bro-stepping all over that park.

Flying back and forth between his CDJs and his drum machine while his hand was sliding on the Pioneer cross fader. The dude is a technician. The crowd about lost it when in a 5-10 minute span, Diplo cut between “Que, Que” w/ Dillon Francis, Beastie Boys “Intergalactic,” Major Lazer – “Pon De Floor,” into a blend of Harry Belafonte’s “Banana Boat Song” and the club hit by Duck Sauce “Barbra Streisand.” — (shortly followed by “Moonbah” Afrojack remix, and per his favorite track… “Satisfaction” by Benny Benassi). All the while, the booty dancer was brought a dude on stage only to take a running start and pounce on his mid section, then the illicit strip pole grind continued. If that wasn’t enough, Diplo then brought what started as five girls on stage and ended with 20. As they exited stage right, I then heard what became the reoccurring sample of the weekend Blur “Song 2” (it was played two more times during the festival… Benny Benassi & Bassnectar).

Overall, it was pure entertainment. Everyone left with a smile on their face and some strange, yet funny image burned into their memory. The light show was dope, and I really enjoyed the dance hall tracks he peppered into his set. Ones like Collie Budz “Come Around,” and “Good Enuff” even though it seemed to slow the mojo. It reaffirms the fact that Diplo might be the most diverse DJ in the game. He opened with dubstep, and closed with Bob Marley “One Love.” Doesn’t get much more diverse than that.