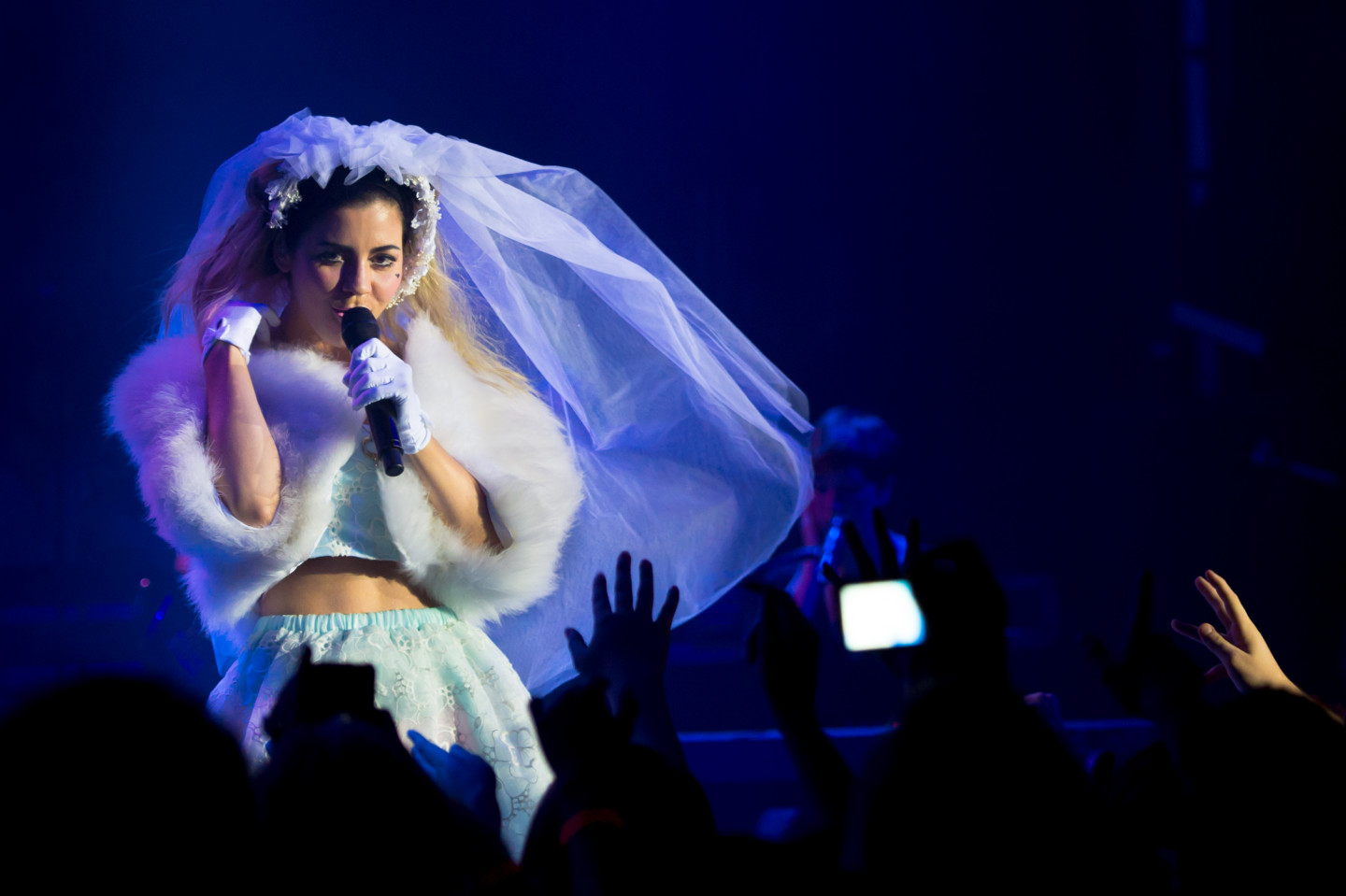 A fair warning: I may deter some fans of Marina and the Diamonds at the jump by stating that I arrived at this show as a non-fan. There I was at the Park West, admittedly confident there was no chance I’d be much interested in whatever diamonds Marina was planning to flash around. Next thing I know, the Madonna song playing comes to a halt, the room grows dark and a neon sign lights up on stage and glows “Electra Heart” in pink.

Then it came; an ecstatic roar of anticipation from the sold-out crowd as Marina Lambrini Diamandis emerged on stage donning a bride’s veil and clutching a bouquet. Wait, did I say the roar was ecstatic? What I meant to say was – not since gladiators set foot into the ring of death do I think there has been such a raucous roar of excitement from a crowd. Except instead of a ring of death, it was a spectacle of all things frilly, girly and pink – and instead of the crowd being blood-thirsty, it was largely a throng of lean men in tank tops who just wanted to dance.

Like a fairy spreading magic, the newly arrived bride threw a fist full of glitter as she broke into “Homewrecker” for the first song. Wearing long white gloves, she waved her hand about with poise, confidence and humor. At this point, I start to scribble adjectives on my little notepad left and right; cartoonish, theatrical, unapologetically cheesy – perhaps even tacky, definitely over-the-top, sassy, playful, fun, imaginative.

Very quickly, any criticism I had began to melt away. Each time I tried to dismiss her exaggerated antics, I couldn’t control the smile that was creeping on my face. It was like watching a grown woman play dress-up and sing into a hair brush, who actually happens to be light-years more talented than when I did it back in the ’80s. She’s this bouncy little kitten prancing about on stage, fully aware of her own exaggeration. While she is the epitome of playful with a healthy dose of silly, Marina maintains an air of grace all the way through. It’s this winning combination that grants her the adoration of fans, and that will win over skeptics like myself when they witness her live.

Fans heard songs off new record, Electra Heart, to include “Primadonna” and “Bubblegum Bitch” – but also favorite tracks from The Family Jewels, such as  ”I Am Not a Robot”, “Hollywood”, and “Obsessions”.  Naturally, there were costume changes as well. At one point she was wearing a bubblegum-pink prom dress that conjured Molly Ringwald in Sixteen Candles. She later adorned that same dress with a magenta sash that read, “MISS SELFISH BITCH”.

She can artfully switch from a vulnerable feminine energy to a sassy, cheeky and empowered broad, all while keeping the crowd eating out of her pixie-dusted palm. Case-in-point, many members of the crowd brought her presents. She welcomed a Barbie doll, a stuffed animal (she called it a “teddy”) and a box of Ferrero Rocher chocolates (to which she remarked, “Hel-lo obesity!”) The crowd really did come across as truly, madly, deeply in love with her and she returned the energy in kind. ”Chicago, you’re brilliant,” she remarked. “Honestly, I’m not kissing your bum,” she continued. “You really are!”

So there you have it. I went into it disinterested but left as a fan and here’s why: Because under the neon, lace, glitter and theatrics, she’s also a clever woman with heart and depth who knows how to leave a crowd wanting. Honestly, I’m not kissing your bum, Marina. You really are.