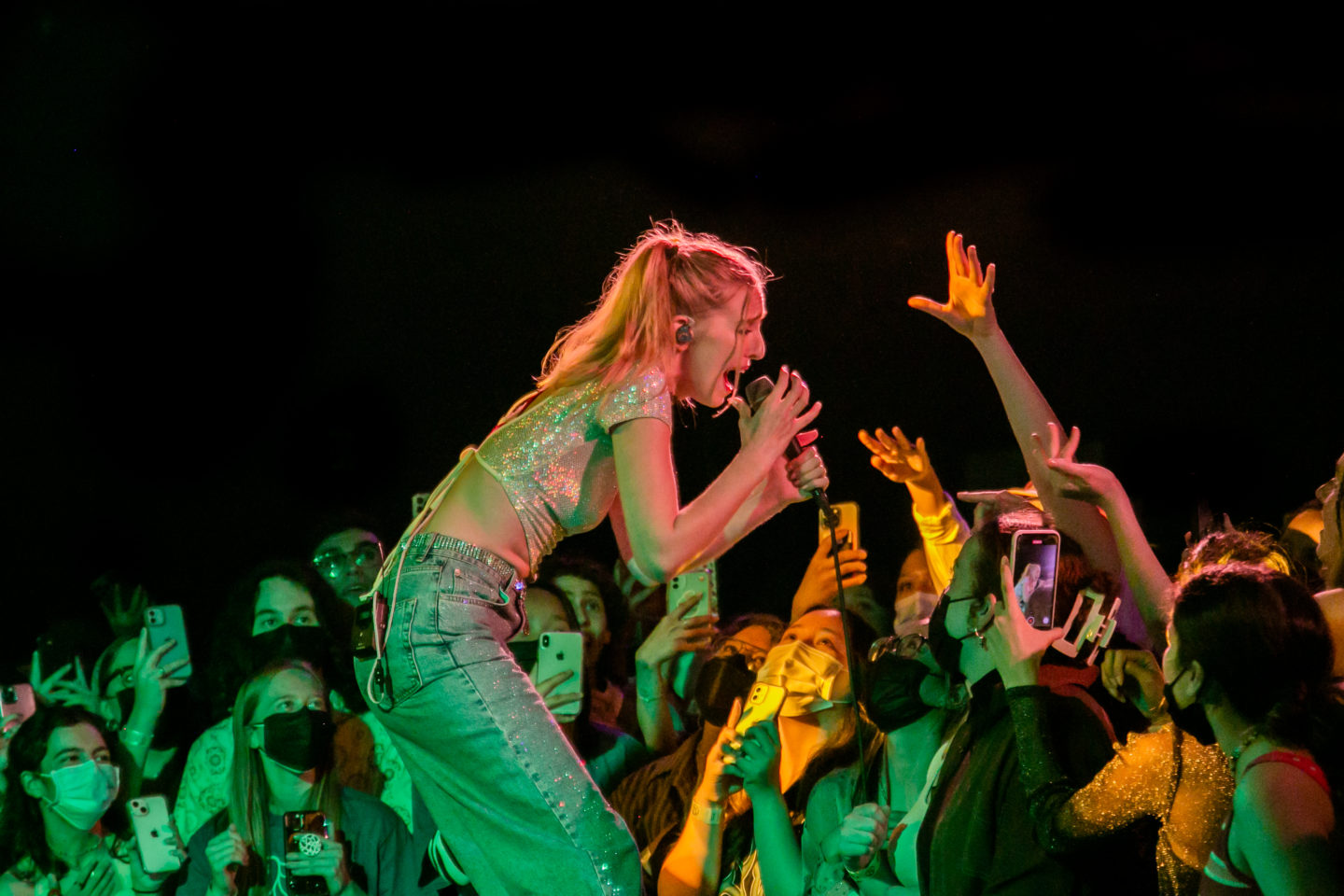 Maude Latour at The Roxy Theatre

Indie pop artist Maude Latour attracted an intimate crowd of artsy adolescents (and some hip millennials) to The Roxy Theatre on a Tuesday night. The disco ball in the center of the ceiling kept everyone occupied as we waited for the show to start. Finally, a break in the non-Latour music. The curtain lifted and exposed an . . . empty mic stand? The crowd was buzzing with anticipation of Maude Latour’s bubbly expression appearing on that stage. Left with a drummer in a Black Sabbath t-shirt and a guitarist looking as eager as the crowd, an introductory drum/guitar duet excited us for what was to come: Maude Latour bounding, or rather bouncing, onto the stage. She was aptly clad in a fully bedazzled outfit with her hair tied in equally bouncy pigtails. Latour’s energy was unmatched, and as she launched into her song “Starsick,” the audience could feel the bass pulsing through the floor, everyone’s heartbeats synching with the music. The Roxy’s strict rules regarding standing in the walkway forced a community within the boundaries of the dance floor. The path was a no parking zone, and my beat-up Air Forces were faithfully avoiding a ticket.

The Roxy, an intimate venue with standing room only, was the perfect setting for this electric performance. Everyone was feeling all together the sensation of the music. This show was a community bonding retreat. By retreat I really mean oasis, because, just as her Instagram bio advertises, Maude Latour brings you into her own universe. You can’t help but be entranced by her dazzling stage presence and shiny (oh so shiny) garb. The performance and the venue meshed perfectly together, giving Latour the ability to speak candidly with a captive audience in a room with little distraction. As if to prove this collective feeling, Latour led the crowd through a deep breathing exercise in an effort to achieve that perfect silence that you find in conversational pauses, or “between tree branches.” Leaving the venue at the end of the night, I heard one friend remark to another: “That breathing thing was amazing.” I’d go so far as to say it was transcendent. Never in my life have I felt that palpable silence at a concert.

This is groundbreaking stuff people.

To further the groundbreaking-ness of this performance, Latour gave the crowd not one, but two (TWO) unreleased songs to get fired up for. Each time she asked, “How would you feel if I showed you a new song?” And each time she was rewarded with a cacophony of “SING IT!”-s from an enthusiastic crowd.

To end the night, she left the stage, leaving an emptiness in the room. Everyone waited, suspended in a frozen anticipation. In typical encore style, someone started a chant. As the chant spread through the room and then turned to cheering, a somehow still energetic Maude Latour came, once again, bouncing onto the stage to sing her last song “One More Weekend” (a fan favorite). This finale to a fun filled night left everyone feeling satisfied. Laughs of happy fans trailed out the door as the crowd that had filled The Roxy shuffled onto the sidewalk to await their rides.