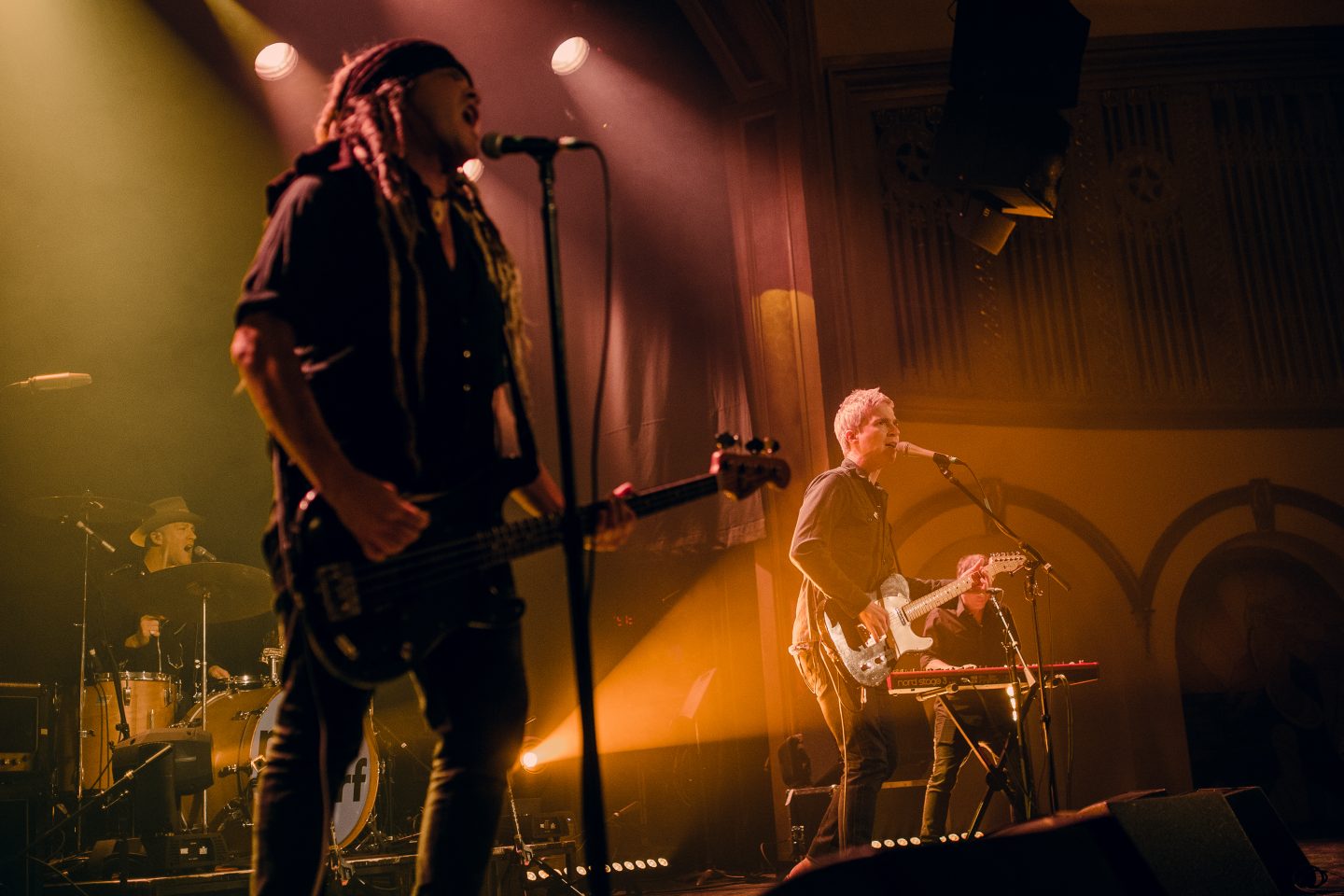 Nada Surf is a band that’s been around long enough to not only make a lot of albums, nine full-length studio album to be exact, but long enough for fans to ‘subscribe’ to the point where if any of them had been on the ‘70s TV game show Name That Tune, they’d be crushing all the Nada Surf songs in 3 notes or less. I choose the word subscribe because it’s relevant to the now. Following and subscribing is how we show our devotion as fans these days. Whether you love music for catchy riffs, excellent lyrics or the connectivity a live performance offers, Nada Surf hits it on all fronts.

The excitement from the crowd says it all. They want it. They got it. They want more of it. And with a band like Nada Surf, they’re gonna get it. The cheers and hollers at the beginning of literally every song speak more to fandom and devotion than do any other present day online traffic or social media metrics. It’s funny, this sense of duality between digital popularity and truly feeling the love can be loosely likened to the band’s career arc, from delivering a chart-topping hit like Popular, which isn’t really all that great of a song in my personal opinion, to their current songs that focus more on actual connection with yourself and those around you and living a life with meaning.

We need music like this for our cultural health in Seattle, and the U.S., now more than ever.

It surprises me a little that even an upbeat track like Hi-Speed Soul could only get some people moving the way we/I used to. Maybe it’s in part because we’re all getting a little older. Maybe it’s due to the fact that we simply engage with the things and the people we love differently now. There’s definitely a new, modern age way for people to get off in their own unique and sometimes more subtle ways. Some people don’t show their excitement as much in a physical sense. Still, the claps and shouts from many filled The Neptune Theatre with love and desire for more.

It’s always interesting for me to see what others are excited to hear at a show. Different sounds of cheering coming from different places in the venue at the start of different songs. It’s a great demonstration of the range of interests and passions of a collected group of people, as well as the band’s ability to connect through their writing.

Bass player and band co-founder Daniel Lorca talked a little between numbers about his excitement to be playing new songs on this tour, in reference to their new album Never Not Together, right before launching into the bass-lead riff of their very early Elektra Records era song The Plan from their early ‘High/Low’ album. Oddly enough, the only songs from the yet to be released album the band played live were the same three you can currently listen to on Spotify. Still, the crowd celebrated the start and end of each as if they were classics they’d grown up with.

Frontman Matthew Caws took a moment between songs to thank the crowd in a long roundabout storytelling kind of way. He explained how between albums earlier on in the band’s existence, they would take on jobs between albums and tours. Caws used to work in a Brooklyn, NY record store and occasionally would be asked “Hey.. are you.. breeeve breeeberr beee..? [sounds of what we must figure is a person asking him if he’s from that band who wrote Popular]” After a nice laugh from the crowd, he continued to explain that at the the start of a tour like this it’s a clear reminder that each part of being in a band can feel very separate. From the writing to recording to in between times to touring, all are their own distinct moments and parts of the whole.

And at the end of the day it is all thanks to us, to you, the fans. We are the constant throughout all of it.

I love watching the band play a song like Blizzard of ‘77. All the band members singing along like they are gathered ’round a campfire with only Caws playing his acoustic guitar from the center of the stage. It doesn’t take flashy antics to bring people together. Much of the crowd was welcomed into singing along for this number as well.

The people of Seattle received some special shoutouts at the show. “A lot of these songs here were made in Seattle.” Caws said. The bands’ current record label Barsuk is based in Seattle. I imagine this is why the band chose to make Seattle the tour opener for their first studio album in 4 years. In a way it’s a bit like a homecoming.

During the encore the crowd joined along singing the intro and refrains to Always Love: “Always love. Hate will get you every time.” A beautiful message and reminder to spread love and quit with the hate. The show ended with the track Blankest Year from their album ‘The Weight Is A Gift’. Caws lead us into this new year and new decade with this lyrical shout back anthem: “Oh Fuck It! [Fuck iiiiittt the crowd cheers back] I’m gonna have a party! Oh Fuck It! [Fuck iiiiittt]” That’s the right way to start the new year.

Listening to Nada Surf is like plugging RCA cords filled with realistic optimism directly into your brain.

With songs like So Much Love off their soon to be released (unless you’re lucky enough to catch them live beforehand to pick one up) album ‘Never Not Together’, all you can think to do is put your arms around your neighbor and remind each other that love will get us all to the places we should be heading towards. And together we will surely persevere and arrive.

Nada Surf returns to Neptune Theatre and back to fans’ hearts.

Jagwar Twin at The Neptune Theatre

Murder By Death at The Neptune Theatre