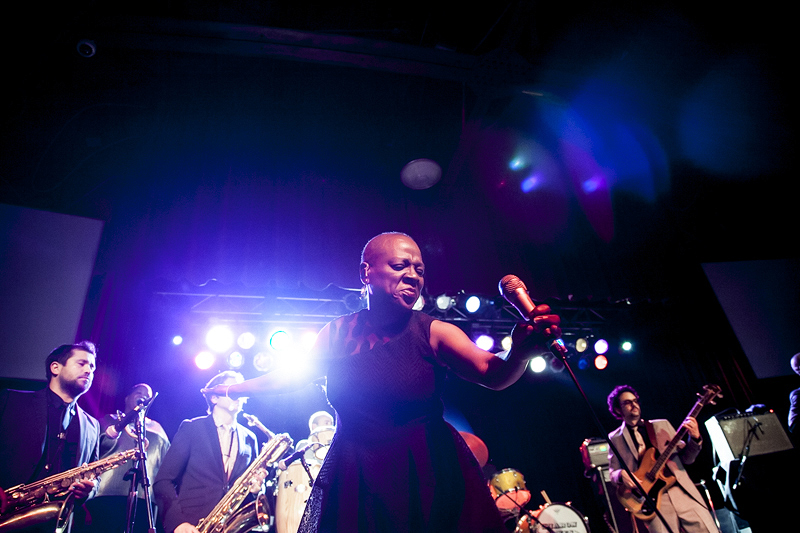 Sharon Jones and the Dap Kings at The Orange Peel

At the Orange Peel in Asheville N.C., a sold out crowd buzzed with the anticipation of the electric Sharon Jones. The evening starts effortlessly with the beautiful sounds of Memphis based singer Valerie June, whose music sets the tone of the evening perfectly. With the lights dimmed, the Dap Kings settle into a heavy groove that gets the crowd shaking. Band leader Binky Griptite takes the lead on the first number, followed by a number featuring the beautiful Starr Duncan who sang stunning back up vocals for the rest of the show despite her other half out sick for the evening. With the band grooving and the whole room rocking, Binky gets the crowd whipped into a frenzy while hyping the entrance of the elegant and fiery Sharon Jones.

The past year has been one riddled with trials and tribulations for Sharon Jones. A recent battle with pancreatic cancer had sidelined the singer through parts of 2013. When Jones hit the stage however, it was evident that nothing could stand in her way, and nothing would slow her down. With the recent release of her new acclaimed album Give The People What They Want it was clear that she would do just that. Sharon Jones is what we want. She is a blinding energy. A radiant star. The embodiment of soul and purveyor of love.

The Dap Kings set a deeper groove than anyone in the business and perfectly accentuate the power of Jones. The band wailed throughout the night while never overpowering the vocals. This is a true testament of a great band. The horn section was sharp, biting, nasty. At times toting three saxophones that gave the band a real buzz. The rhythm section is enough to make even Ike and Tina bat a lash with envy, and kept us moving the whole night through. But as the sun shone brightest among the stars, Jones let her light radiate as her soulful voice soared much to the delight of our ears. Even while battling through a cold as well as monitor issues early in the set, Sharon Jones took it all effortlessly in stride as she ripped through material old and new.

The show intermingled old hits such as “100 Days, 100 Nights” which were familiar to the crowds ears and had us all singing along and dancing, with new material off of Give The People What They Want. The new material has solidified her place as the modern day Queen of soul. She embodies the spirit of the old greats while maintaining her own eloquent, unique persona. Songs like ” Making Up and Breaking Up” reminisce the essence of R&B and kept the crowd swaying while the sharp “Stranger to My Happiness” got the crowd shouting and bouncing relentlessly.

As the night came spiraling to a close, Sharon Jones again had the audience eating out of the palm of her hand as she came out into the crowd to sing her final number. While the whole crowd over swooned, Jones in fitting fashion for a Valentines’ Day show, stole the hearts of the sold out Asheville crowd leaving us yearning for more. Sharon Jones’ effervescent energy is truly infectious, her beauty is radiant and her soul is unequivocal. She is one of the most entrancing performers I have had the pleasure of watching and wait with great anticipation to see what the future holds for Sharon Jones and The Dap Kings. Until she comes back around, I will have to spin Give The People What They Want until the needle breaks and the grooves wear thin.

It was a sound greater than the sum of their individual parts.