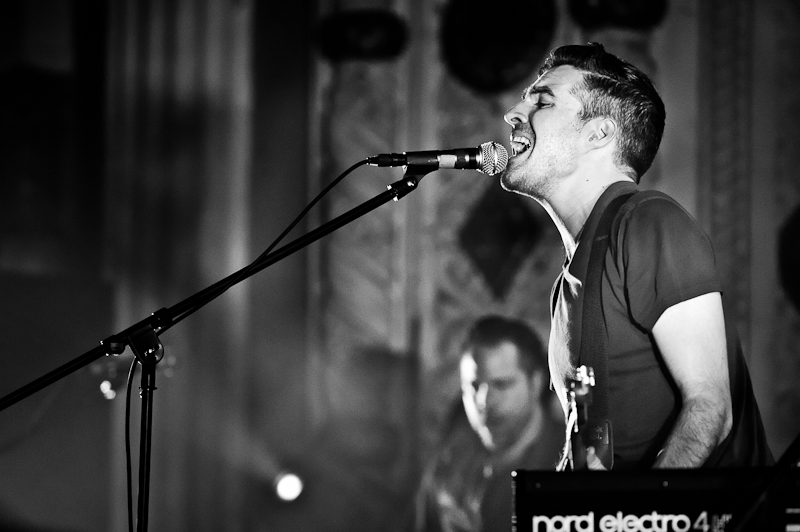 The Boxer Rebellion at Metro

Striking vocals and super-charged atmospheric rock from The Boxer Rebellion energized a summer Saturday night last week. The crowd at Metro jumped on the chance to catch a full set from the quartet out of London, who had played The Tonight Show with Jay Leno just the night before.

The band kicked things off right from the very start, with guitarist Todd Howe riffing down to his knees at the end of opening song “The Runner”. This resulted in an eruption of cheers from the crowd that surely rivaled the glee of Blackhawks fans gathered in bars around the city for Game 2 of the Stanley Cup Finals. It’s actually Howe who brings the most “rock” to this band all around – engaging energetically with the crowd, tearing it up on the guitar and chiming in with presence on background vocals for tracks like “If You Run”. In comparison, Tennessee-born lead singer Nathan Nicholson gets more lost in the music as he delivers vocals that range from tranquil to towering. Bassist Adam Harrison and drummer Piers Hewitt are the two more reserved Englishmen on stage, but bring solid musicianship.

Song highlights include “Diamonds“, which is the shining…umm… gem on new record Promises. Bathed in blue lights, Nicholson’s compelling voice soared until the song ended on its final kick snare. The fellas also brought us “Keep Moving”, “You Belong to Me” and “New York”, for which they switched things up for Howe and Harrison to join in on percussion as Nicholson took to the keys. Playing well to a Chicago crowd, Nicholson altered the song ending to sing “Chicagoooooo” and threw in a “Go Blackhawks” lyric for good measure. He then brought up the Cubs and Sox rivalry and went on record as a Cubs fan – which was too bad for the surprising number of Sox fans in attendance at the Wrigleyville venue. It was song after song of beautifully contrasted low and high vocals; including one track with a crescendo of drumbeats so grand that it could have shaken entire families of squirrels out of all the trees in Lincoln Park. The reaction from the crowd was so tremendous, you’d have thought Patrick Kane had just blazed a game-winning puck past the Bruins’ goalie.

The Boxer Rebellion has been together for 12 years and it comes through. If you’re looking for a boisterous rock show, this may not be the set for you; but there’s no denying they play an incredibly tight set that offers fans a balanced combination of music that is at once emotional and forceful; delicate but strong; vulnerable yet self-assured.This is music well worth knowing, listening to and experiencing live.

My Brightest Diamond at Metro

Her awesome red hair and sequin outfit added a sparkle only a diamond could.