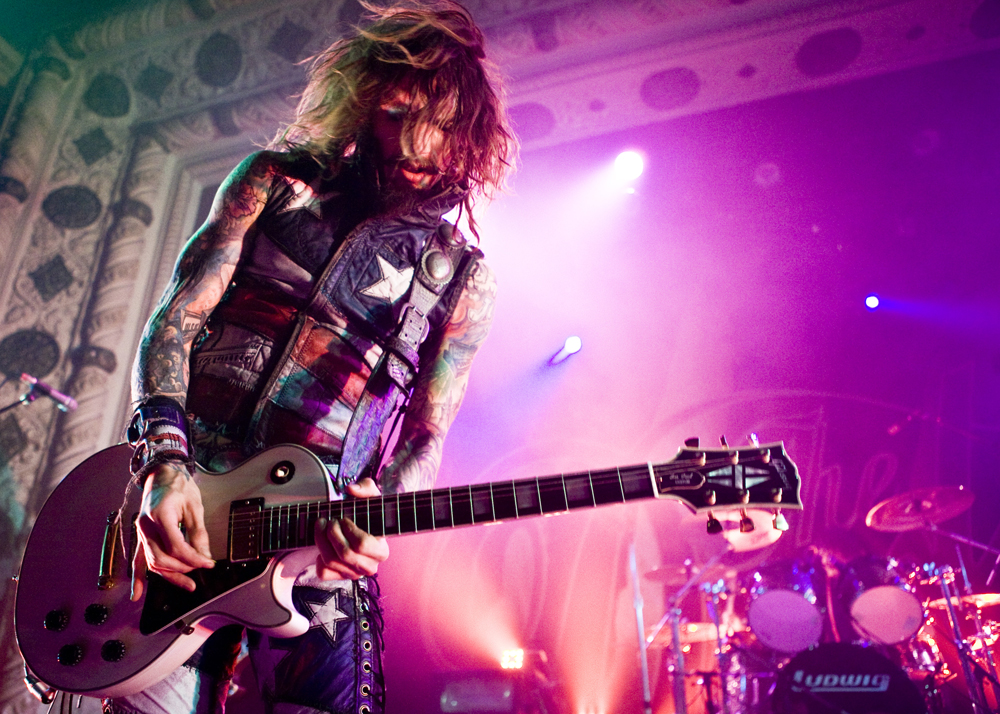 Looking at the members of The Darkness, there are a few things that will immediately hit you. There are members that could easily fill in for Svengoolie. Leopard print and leather are back in a big way. The length and unkemptness of your hair is directly tied to your ability to rock. But most importantly, this just fucking looks like rock n’ roll. And yeah, some people might be offended by the tight pants, or the popped collars, or the face sweaters, or all the tattoos, but you know what? Fuck em. The Darkness is back.

Costume changes. Substance abuse recovery. Guitar solos that “melt faces.” A falsetto that simultaneously wrecks eardrums and turns pants into an afterthought. Those are the things that used to define rock n’ roll. They’re the same things that define The Darkness in 2012. There’s no fucking around when you see The Darkness…except for all the fucking around. Wait. Let me clarify.

The Darkness are serious business when it comes to fucking around. The lyrics never really cross into the deep end, but they’re so emphatically delivered that you never really notice that Justin Hawkins is actually singing about knockers and not Shakespeare. “You’re beautiful and busty, but I’m a little rusty” might not have anything to do with iambic pentameter or be a soliloquy, but more people would know what those two things were if Hawkins had any say in the matter. There is such a level of conviction that, truth be told, it doesn’t really matter what he’s singing about because you’ll get so into it that you bust a vocal chord just trying to hit the same octave he does.

Most of the time, chanting “mother,” “fucker” is frowned upon. Not at a Darkness show. Having an giant, flying reptile fuck a spaceship isn’t normally kosher for network television. It’s totally normal in The Darkness music videos. Every member of The Darkness is so totally intent on making sure that you, one random person in the audience, have a good time that they make you feel like a superstar. A superstar that’s about to get fucked by a combination of Kenny Powers and Ron Jeremy dressed up in an Evil Knievel costume.

So yeah, they fuck around, but it’s in the most professional, delicate way possible. It was the type of performance that makes you remember why you started going to shows in the first place. The type of performance that, looking back, you wish you brought your parents to just to see the look on their faces. It’s now officially the bar that all other shows will be judged against. There are plenty of hilariously excellent things to say about The Darkness performance, but if you weren’t there to witness it firsthand the only thing worth saying is “I’m sorry” because you missed it.