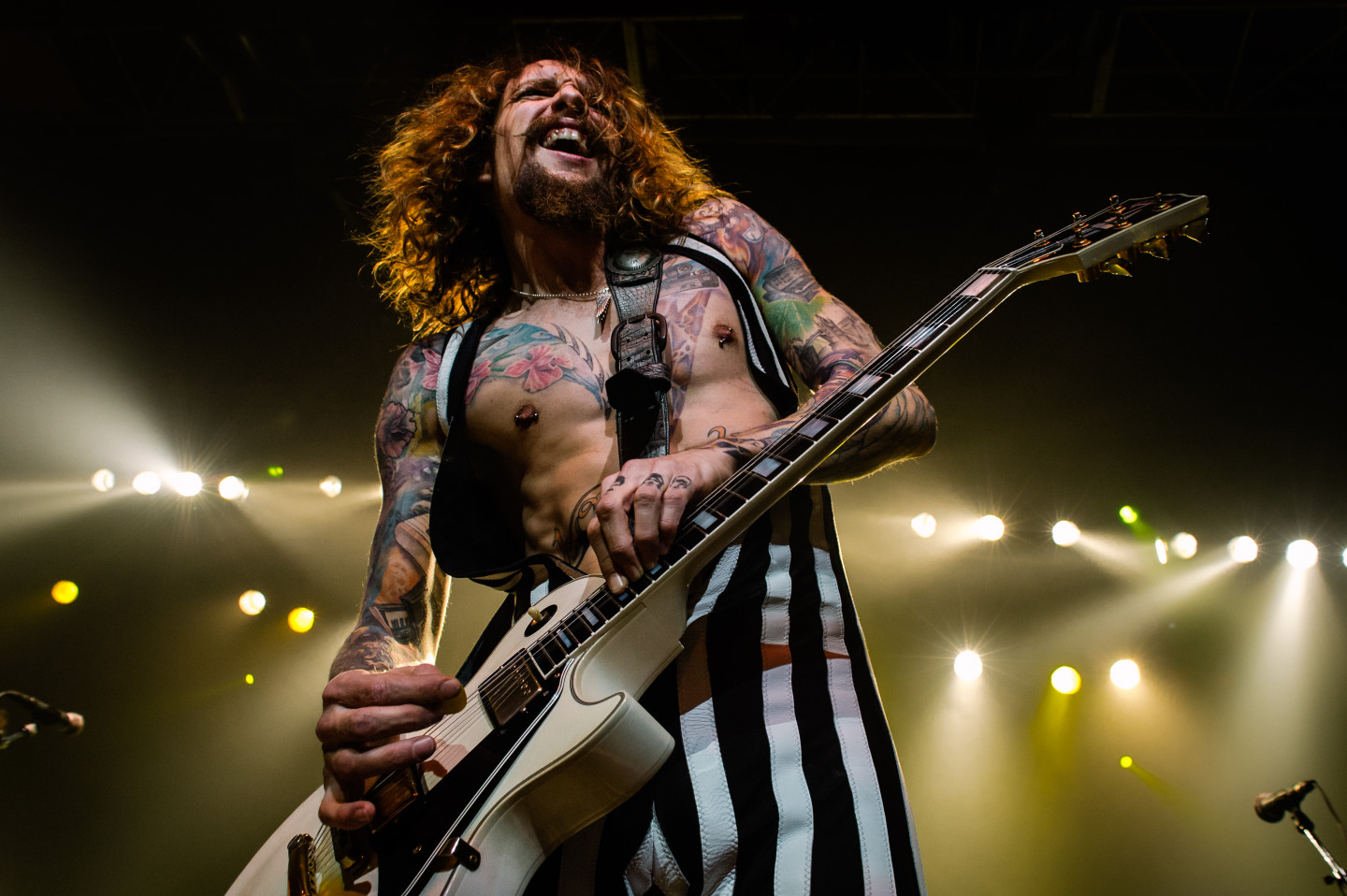 The lights at The Vic dim with a start. Someone behind the soundboard flips a switch. The music that swells from the speakers can only be described as synthesized sex. It’s retro, it’s outrageous, it sings sweet scales of something epic about to unfold. And then the lights fade up backstage on a massive sign of “The Darkness,” and in that moment I remembered it all: why I ever liked this band, why they reminded me of the best of Queen, and how music could be so unabashedly fun.

After we’re left to ogle this monument to pop-metal flamboyance, the band jumps to the stage with such energy that it feels as if they’re coming back for their second set. Ho-ly shit, are these guys just as colorful as ever.

“We are The motherfucking Darkness from the United motherfuckingKingdom and we are here on business,” proclaims hilarious frontman Justin Hawkins, who came dressed for the gig in his finest Sunday zebra attire. The ghost of Freddie Mercury apparently lives on through Hawkins, although he’s a bit more foul-mouthed than I remember.

Justin’s black-and-white mankini, outrageous though it is, by no means overshadows the outrageous threads that bassist Frankie Poullain was rocking. That’s not a verb I use lightly—Frankie shoved his massive white-boy haircut into a Thin Lizzy meets Sgt. Pepper costume and somehow actually pulled it off. Justin’s younger brother, guitarist Dan Hawkins, and drummer Ed Graham may not have dressed quite so bombastically, but they made up for it with their musicianship (which was mighty admirable).

But all of this is just summary, isn’t it? That’s not why you’re here. You really want to know only one thing—do they still have it? Did they play their hit? Was it still really catchy?

Yes. To all of that stuff. But you should know something else, dear reader: these guys might be better now than they ever were before.

Even though this band has been around the block a few times and suffered a hiatus, it may have been the best thing to ever happen to them. They looked recharged and focused. Most interviews since their reformation in 2011 back this idea up—these guys want to return to what made the music fun in the first place, and I left The Vic with a firm sense that they were succeeding.

Not everything was sunshine and quippy British “humour”—the middle of the set suffered a distinct lack of freshness. The Darkness doesn’t write music to reinvent the wheel, but they’re in the business of having a good time and letting that energy infect a crowd and for a good twenty minutes, I wasn’t catching the bug.

But just as they exploded into the beginning of the set, they finished with even more bloodthirstiness, culminating in the luxurious finale of (obviously) I Believe In A Thing Called Love. Man, I really didn’t expect to get into that song on Sunday. Who hasn’t heard it on repeat in college fraternity basements nationwide since 2005, AMIRITE?! But I couldn’t help it—they sold it with energy and the saccharin hooks took hold. I was a willing slave to the show.

The encore showed us (what I hope is) a sign of things to come: experimentation. Breaking from their mold of power-pop-metal songwriting (not that I’m complaining, in this case), The Darkness covered Radiohead’s now-ancient but still-amazing track, Street Spirit (Fade Out). The result was surprising and stunning. Give me more of that, guys —start pushing those envelopes and get creative. But for the love of god, never lose that youthful sense of amusement. It’s just too damn entertaining.