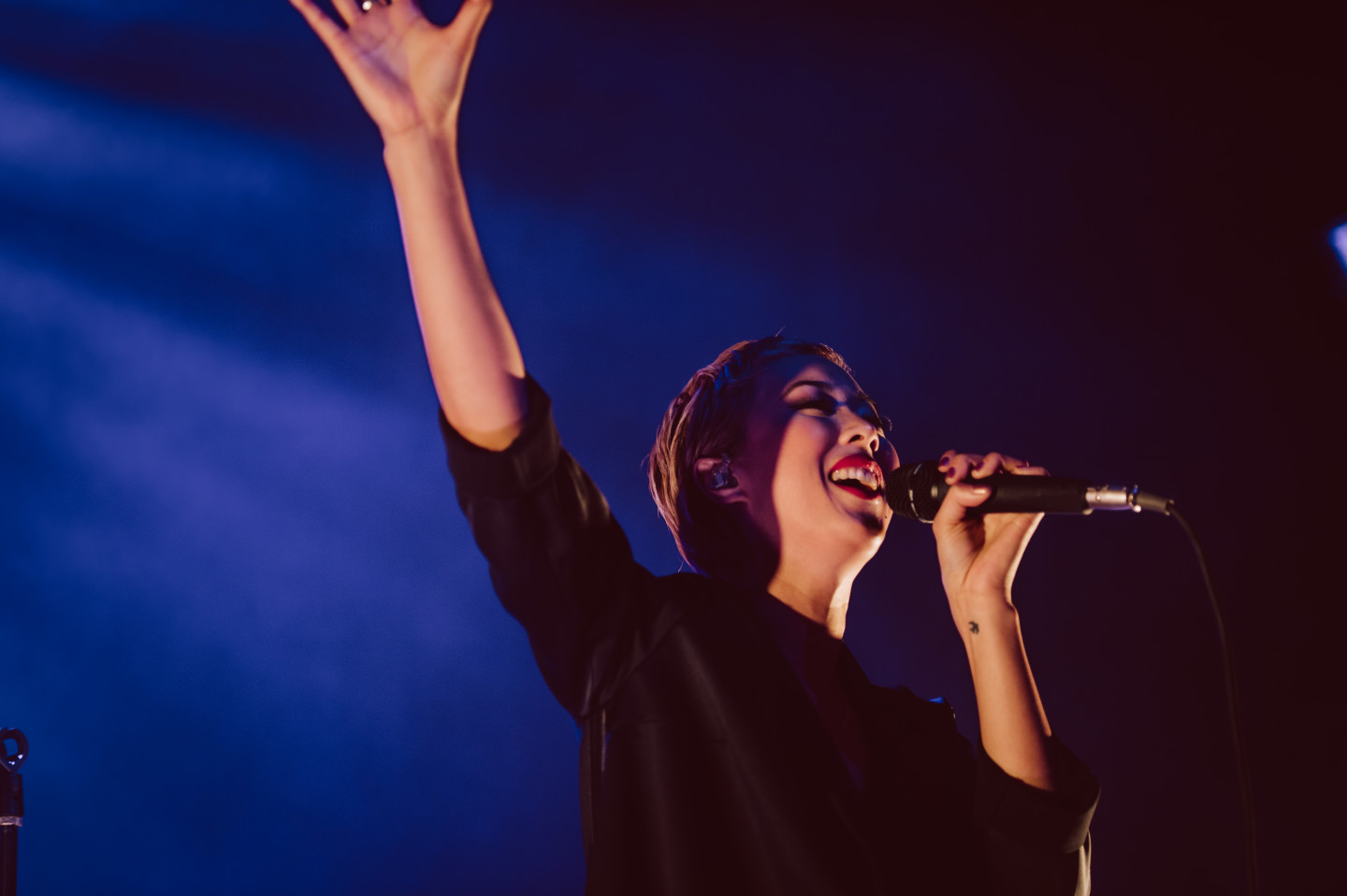 Lights, camera, action! Wait, that’s not right. Lights, camera, music! Nope, still not it. Lights, music, more lights! Think I’ve got it now. Still riding high from their 2010 release Passive Me, Aggressive You, The Naked and Famous are taking the wave and building it up. The New Zealand musicians were brought their ‘A’ game fully equipped with material from their newest album In Rolling Waves.

This was not the first time I had seen The Naked and Famous live, but it was defiantly the first time I ACTUALLY saw them perform. In 2011, I was able to catch a bit of their set at Lollapalooza. It was a solid, enjoyable performance no doubt.  However, what I witnessed at the Riviera blew away what I previously saw. The set started with a veiled stage illuminated ever so scarcely. Accented bass tones dictated when our eyes were able to see the group whom were dressed to match the stages appearance. The opening seemed to be as much about their music as it was the visual accompaniment. The aesthetic bar was set pretty high by the time “A Stillness” came to an end.  Throughout the rest of the night, our eyes were filled with blues and reds. Flickering lights and sweeping flashes. Intertwined with the tones and rhythms spewing out of the speakers, the visual aspect of the night kept my mind thoroughly on the edge of its proverbial seat.

Musically speaking two things especially stood out to me. The synth/midi voices throughout the night were layered with extreme taste. It’s one thing to hear the multi layering while listening to an album. It’s a whole other beast to tame doing it live. From top to bottom I was able to pick out the many different voices and focus on them. It may not be spoken about or consciously noticed, but an audience as a whole has to be appreciative of that type of musicianship. Along those lines it was refreshing to hear vocals performed so cleanly. Obviously it has something to do with the equipment and sound engineers on hand; but to sing clearly outside of a recording studio isn’t easy for everyone. I felt both Alisa Xayalith and Thom Powers executed this marvelously, leaving my ears quite the treat.

Shamefully, the only real negative I found from the night was the crowd. If I didn’t know I was at the Riviera, the amount of chatter from portions of the crowd was fitting for night club. I understand they paid for their ticket so in theory they can do what they like. But please, be polite to those around you there to soak in the music and not just to soak their livers in house alcohol. This concludes the ‘Lost In Concert’ public service announcement. Now, here’s the thrilling conclusion to your regularly scheduled programming.

This was a complete performance from the five-piece group. Enchanting sounds and stimulating lights were both relentless and tasteful. I can only hope I catch them on their next album tour to see their growth. Not only my ears, but my eyes cannot wait for what their future performances hold.