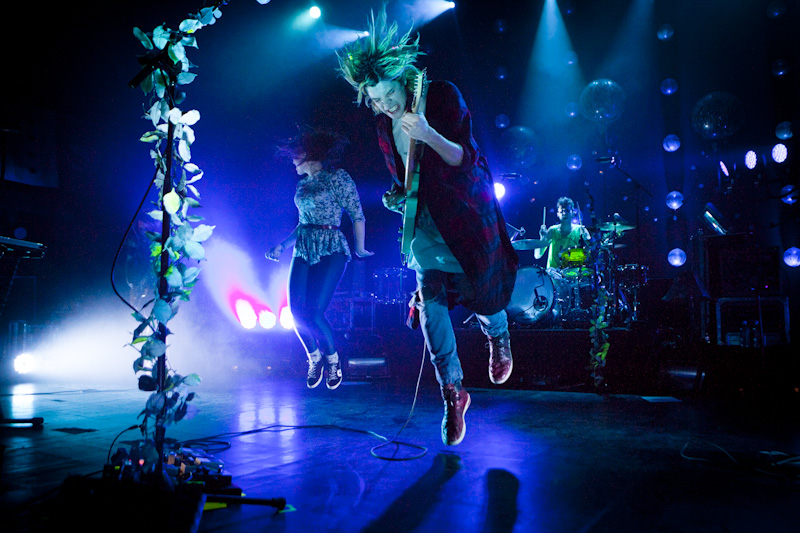 Show /SHō/
“A spectacle or display of something, typically an impressive one”

Con·cert  /känsərt/
“A musical performance given in public, typically by several performers or of several separate compositions”

Round two with Grouplove started very similarly to the first. Multi-sized metallic orbs hung from the ceilings, Christmas lights were woven between the over-sized balls, vines wrapped around each mic stand and lamps rested on the amps. This time however, there was no stopping the music.

There was energy, energy, and then more energy. There was plenty of it just between Hannah Hooper’s dancing and Christian Zucconi head banging. The lights on display added to the effect. Whether they were timed/automatic, being manually controlled or some combination of both, the execution was fantastic. From setting up the mood of a song by setting the stage completely blue, to lights flickering in rhythm of guitar riffs and drum beats it was an exquisite visual stimulant. We were in their world. And it was a beautiful vacation.

In their world there were multiple musicians taking vocal leads, loads of vocal harmonies, whimsical interactions with the crowd and a well done end of the world gimmick (that didn’t feel like a gimmick, even though it was absolutely a gimmick). Oh, and how can I forget, one well done Whitney Houston cover. I’m not going to try and lead you to believe they could sing like Whitney, but their well orchestrated cover of I Wanna Dance With Somebody (Who Loves Me) was outstanding. More so, I was impressed with it being used as some sort of tag ending to Tongue Tied. Being able to alter one of the more popular songs in ones repertoire is a refreshing surprise from what you would normally hear any given day.

(See definitions above if you decided to skip over them) I can’t speak for everyone, but personally I tend to throw around those two words interchangeably when going to see live music. It’s not really a big deal, but I think I’m going to refrain from using “show” until after I see the concert. Because honestly, it’s possible to be at a good (or bad) concert, and not actually see a show; loosely based on the definitions provided. By all accounts, the Grouplove concert was definitely a show.